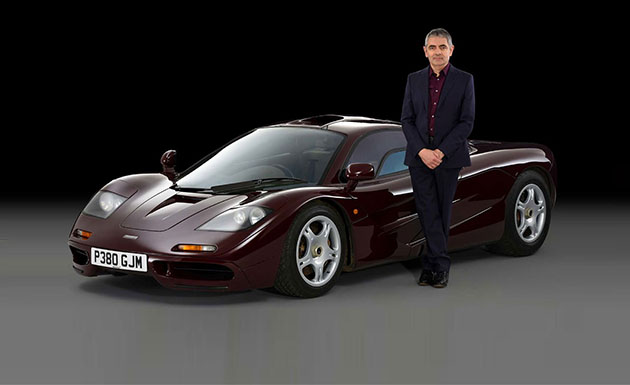 When you have a lot of money to throw around, it’s only natural to develop a taste for the finer things in life. Especially when it comes to classic cars. Actors and sports professionals have some of the most impressive car collections on the planet. The list includes boxing legend Floyd Mayweather and comedian Jay Leno.

An English celebrity who’s known for his collection is Rowan Atkinson. The Mr Bean actor has amassed a variety of vehicles over the years, from the McLaren F1, to an Aston Martin DB2. In his own words “I’m not a collector. I don’t like the toy cupboard syndrome that causes so many good cars to evaporate. It depresses me that they are hidden away like investment art, or gold ingots in a Swiss vault.”

We examine the cars he’s owned and see what makes them so remarkable.

Recognised for its sleek design, Atkinson bought the McLaren F1 in 1997 for £640,000. He crashed it twice, once in 1999 into the back of a Rover in Lancashire. The second time was in 2011, when he crashed into a tree after losing control near Peterborough. Atkinson sold the McLaren in 2015 for £8 million.

An enthusiastic racer, Atkinson has raced many cars, such as a Renault 5 GT Turbo. He’s also raced an Aston Martin V8 Zagato that he crashed while competing in the Aston Martin Owners Club event in Darlington. He bought it in 1998 and had it converted specifically for the Aston club racing series. Atkinson retired it from racing in 2007 and sold it in 2008.

From the bright blue paint, to the ‘33’ symbol adorning the side, Atkinson’s Ford Falcon is an impressive racing car. However, he crashed it during The Shelby Cup in 2014.

The Bentley Mulsannes is a luxury car that was made available for European customers in 2014. Only 22 were made and the name comes from Sir Henry Ralph Stanley Birkin. He was a famous racer who died after the Tripoli Grand Prix in the 1930s. Atkinson played Birkin in the 1995 film Full Throttle. Given Atkinson’s appreciation for racing, it’s easy to see why he’d want to own the car.

Atkinson used to be a writer for CAR magazine and in a 1989 article he went into detail about his trusty yellow Lancia Delta Intergrale. According to him the “16-valve Intergrale can have few peers” and that it’s “a great driver’s car.”

Compared to some of his other cars, Atkinson’s Skoda superb is more conservative. He bought it for £18,000 in 2011, when Skoda was the most popular automaker, beating out Lexus and Porsche. The car features a spacious cabin and a range of safety equipment, such as built-in stability control and curtain airbags.

Atkinson’s collection is diverse, but one car he’ll never own is a Porsche. He’s been open about his opinion. “I have a problem with Porsches. They’re wonderful cars, but I know I could never live with one. Somehow, the typical Porsche people — and I wish them no ill — are not, I feel, my kind of people. I don’t go around saying that Porsches are a pile of dung, but I do know that psychologically I couldn’t handle owning one.”