Yamaha really have gone to town with their 2021 MT-09, giving it everything from a new engine and chassis, to an advanced electronics suite. But just how good is this new model, and have Yamaha created the ultimate sub-1000cc naked? Insidebikes’ Carl Stevens rode one to find out…

Yamaha’s MT-09 has always been an impressive seller and a fun machine to ride, but for me it didn’t quite hit the mark in a few areas where it should’ve really excelled. I always hoped that it would be a slightly smaller and lighter version of Yamaha’s excellent MT-10; yet the ’09 just felt so different, sitting low at the back end and high at the front, which in turn led to a vague feeling when pushing on.

It almost felt like an oddity in the popular MT range and, because of that, I never really felt at home on it - especially as the level of competition is so high in this class. KTM’s 890 Duke, the Kawasaki Z900, MV Agusta’s Brutale 800, not to mention the Triumph Street Triple RS and even Aprilia’s new Tuono 660 all provide exciting alternatives.

But now Yamaha has pulled out all the stops to create a leaner, meaner and faster sub-litre naked. On paper it looks like they really have hit the spot… so we took the range topping SP version out for a spin to see if it was all the bike we’d hoped for.

When we say that the MT-09 is new, we really mean it. ‘All-new’ is a term that’s too often (and usually inappropriately – Ed) bandied around by marketing bods in the motorbike industry, but it is one the 2021 MT-09 can wear with pride. It starts with the beefier new engine.

Sure, it’s still a crossplane three-cylinder motor (known as CP3 in Yama-speak) at heart but, compared to last year’s model, it’s got an extra 42cc, which in turn means the new ’09 has an extra four horsepower (up to 117bhp), alongside an extra 6Nm of torque. It isn’t just a case of making it bigger though, as it comes with a whole host of updates including new camshafts, pistons, crankcases, exhaust system and even a redesigned fuel injection system, which Yamaha say will make that throttle connection extra crisp.

They’ve also given the 2021 ‘09s a whole new chassis and swingarm combo, which is not only lighter and more compact, but also offers more lateral rigidity, which, alongside the slight geometry change for more weight over the front wheel, should make it turn and handle better than ever.

Yamaha have even packed the bike with a load more tech, with a full electronics suite and six-axis IMU that has near enough been lifted from the R1 superbike, including both a quickshifter and autoblipper. Couple that with some updated aesthetics, a TFT dash and some LED lights and it sounds like an absolute corker of a machine; more power, more torque, and it’s even 4kg lighter than the previous model. So, does it live up to the hype?

Not just a pretty face 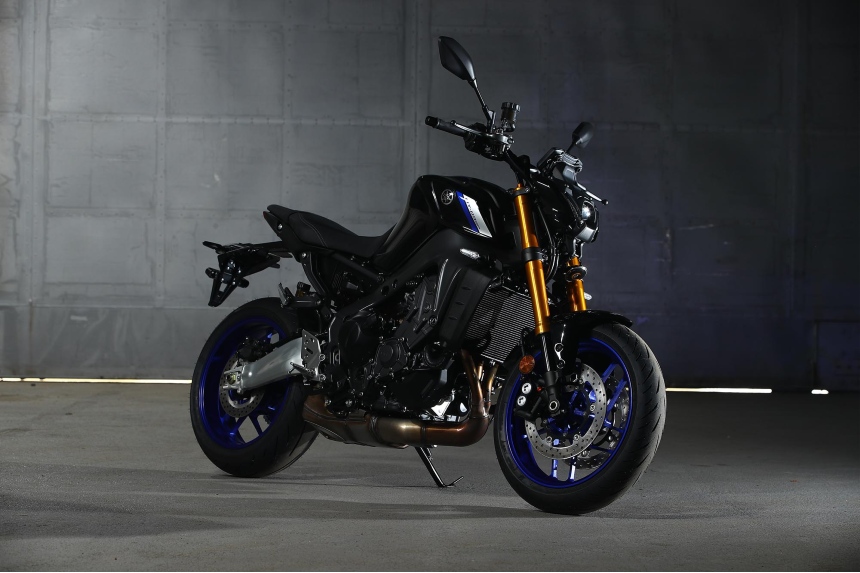 I know the appearance (and more specifically that front end and headlight) has split opinion since the first pictures emerged at the end of last year but I’ve got to say it looks so much better in person than it does on a computer screen. The MT’s sharp lines and dark colour scheme works wonders with the aggressive silhouette, creating a machine that looks, well, as menacing as a sporty naked bike should.

We were on the SP version, which benefits from gold on both the forks and the shock, as well as those tasty little anodised goodies, to create an even saucier combination. As far as appearance and finish goes, the MT-09SP really does hit the mark in every way, and the same goes when you swing a leg over it. The last MT-09 felt a little odd to me, in a sense that the front end was so high, yet the ’21 model feels miles apart from the very first time I parked my rear end on one.

Unlike its smaller sibling, the MT-07, the MT-09 really does feel every bit like a supernaked in stature. Even though the CP3 motor is pretty compact, the tank is fairly big and the bar reach quite far, making it feel much closer to the MT-10 than an MT-07 in terms of ergonomics.

The updated dash, although nestled fairly low and forward is easy to glance at and works a treat with the switchgear, which is not only a doddle to get used to but is also perfectly positioned as well.

I’ve always had a soft spot for Yamaha’s CP3 motor in its various guises, but this latest edition really does go above and beyond in making an impact as soon as you hit the ignition, with a throaty soundtrack that almost makes you want to throw away your earplugs. Whatever Yamaha have done internally, and indeed to the airbox and exhaust, it sounds bloody marvellous.

Setting off in engine mode ‘1’ (the sportiest on offer) I was expecting the torquey and excitable motor to spin up quickly, but the urgency that it thrusts forward with just a little flick of the wrist genuinely took me by surprise; you really can feel the extra power, torque and effort that’s gone into making that motor even more exciting.

The fuelling at the bottom end is seriously smooth which makes life much easier, but even for my throttle-happy wrist, I did feel like mode ‘1’ was a little snatchy when the revs start winding on. With a quick flick to mode ‘2’, everything was cured; it just had that perfect mixture between front-hoisting torque and usable, smooth power.

But it’s not just at the bottom end, as the CP3 motor sings all the way to the ceiling of the rev range with more than enough urgency to keep even the most power-hungry among us happy; especially as the quickshifter and autoblipper work sweetly, whether roaming round town or razzing it off the limiter.

In fact, all the electronics are incredible, with the six-axis IMU and rider aids really going above and beyond to keep everything in check. Streetfighter-style machines tend to have a set-up and geometry style that promotes some seriously naughty riding, and the MT-09 is absolutely no different.

With so much torque on offer, in the first two gears the front end always wants head towards the sky, and with the help of a little clutch the front wheel will hoist itself up, even in third gear… although of course, you can only be doing that when you’re not riding on Her Majesty’s highways. If you aren’t into that type of thing though, the electronics do an incredible job of keeping you safe without feeling intrusive; especially if the wheelie and traction control are setting somewhere in the middle, although of course it’s just down to personal preference.

The same goes for the cruise control; I did a few miles on some A-roads and although there is zero in terms of wind protection, being able to stick the MT on a setting and just get comfortable makes a massive difference, especially if you were looking to munch up some hefty mileage.

But the real question I wanted answered, was just how well it would handle… and after a few hours on the latest MT-09SP in glorious sunshine, riding some stunning B-roads, I got the answer I’ve been waiting for since I first jumped on the original.

The way in which Yamaha have altered the geometry now means that there really is an incredible feeling from the front end, and the way those KYB forks were set-up just instantly filled me with confidence to rail the ‘SP into corners like a full-blooded sportsbike.

One of its weakest points before has now become one of its strengths and, with every curve I came across, I just felt more comfortable and more confident to push on.

This helped by the brakes, which work a treat and have a relatively small amount of electronic intrusion too, which I can only imagine is down to the clever six-axis IMU helping to keep the cornering ABS in line.

And the feeling of B-road bliss from that front end is helped by the new Bridgestone S22s, which are not only seriously grippy if you want to get going in the corners, but warm up quickly too.

Saying that though, it wasn’t instantly perfect; I’m not sure if it has anything to do with Yamaha upping the rigidity of the chassis or just the set-up on our test bike, but the only niggle I found was that the rear Öhlins unit was fairly stiff for my 66kg frame, especially when the road surface wasn’t perfect.

But then again, with just a few clicks of preload (it’s so easy, you could probably do it at the side of the road) all was resolved, and it felt truly spectacular on the rear too. In all honesty, the ease and range of adjustability on the suspension alone makes the SP worth the extra £1,203 over the standard version.

I genuinely think that sporty, upper middleweight nakeds could well be my favourite category of machine on the roads today. They pack enough poke for some serious fun, without having too much at the licence-losing end of the scale, while still being light and incredibly agile on their toes... and now it looks like the MT-09SP is up there with the best of them.

Yamaha have finally mated their smooth and refined engine to an incredibly capable chassis, complemented by a set of sweet suspension, and suite of what I’d say is the perfect amount of electronic wizardry (although heated grips would be nice).

For just over £10k you really do get a lot of bike for the money; something that’s genuinely capable blasting on B-roads, commuting in the city, taking on heavy mileage and, dare I say it, now even competent enough to take on a track day.