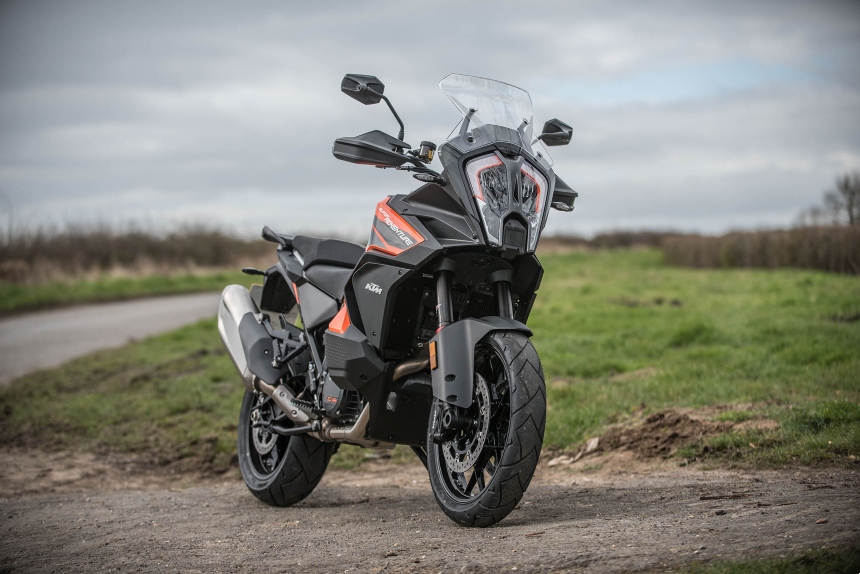 KTM’s confidence in its new 1290 Super Adventure S is clear. According to the Austrians, it’s the ‘Ultimate High-Performance Adventure Bike’ – a pretty big claim, but as the previous model’s speedy dynamics are so impressive, it’s probably not too far-fetched.

Despite sporting a slimmer tank, bodywork and lower seat, the 2021 1290 Super Adventure S, which costs £14,999, looks broadly similar to the version it supersedes, even though it is 90% new. In saying that, it’s more of a refinement than anything radically alternative, something underlined during my day-long, 200-mile UK ride.

That’s no bad thing, with some changes bringing notable improvements to the latest 1290’s performance, and one particular feature proving very interesting. All in all, it’s an appreciably better machine than the outgoing model.

I should admit straightaway I’m a big fan of adventure bikes, and those with spirited performance win me over all the more. This KTM really did make an especially positive impression on me, and here’s why. 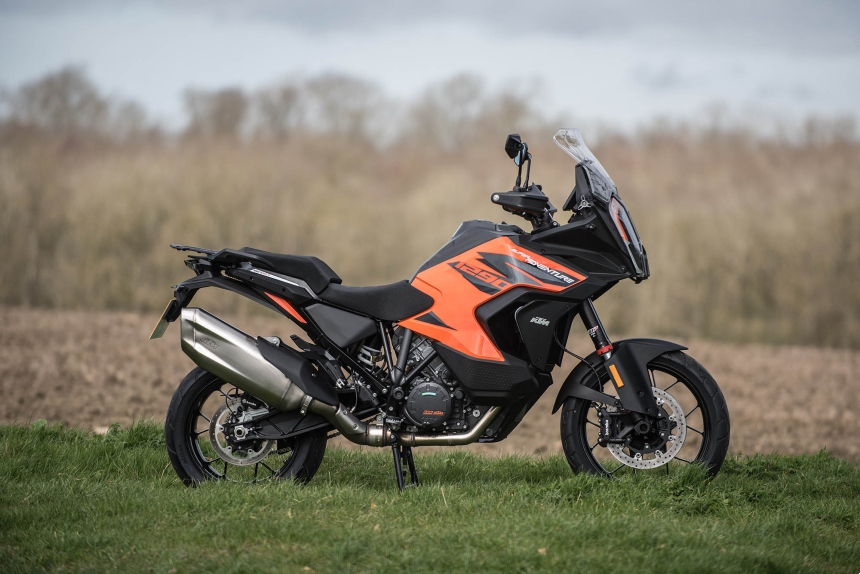 In essence it’s a sportsbike, albeit one with an upright riding position. It has very strong, easy to access, performance and combines with a high level of comfort and practicality to make it one of the most versatile bikes on the market. You could happily take it to a track day at Donington Park and do some respectable lap times.

When done with that, with luggage and pillion added, you could travel down in full civility to another distant track like Jerez and do more fast lapping. I’m confident it would be hard to fault at any point during the whole adventure. There aren’t many bikes that can play such fully varied roles quite as well.

One key factor, that’s hard to measure or indeed explain, but certainly very evident, is the entertainment and excitement the 1290 offers. It’s a trait that exists in every single KTM I’ve ever ridden, and really does help set the brand apart. It must have taken just five minutes, if that, to appreciate this unique feature.

Before long, I was enjoying myself so much, I already wanted the day to last as long as possible. And I say that after riding Suzuki’s incredibly impressive and emotive new Hayabusa just 24 hours earlier. Even the huge temperature drop that greeted the KTM test day couldn’t chill the warmth I so quickly developed for this superb machine.

Its brilliant steering and remarkable agility definitely contribute to the 1290’s fun factor in my book. The shortened frame helps account for some of the obvious flickability, with a longer swingarm helping stability. More spirited riding down backroads is certainly something the KTM really excels at.

Luckily for me, the first part of my day with the KTM was spent attempting to look good for the camera, and even though the chosen corners were a bit dirty, and quite bumpy, the KTM took the act of whizzing past the lenses in its stride, never causing one moment of worry. The ability to turn the 1290 into the corner so late, after leaving the braking to the very last moment, is so commendable. 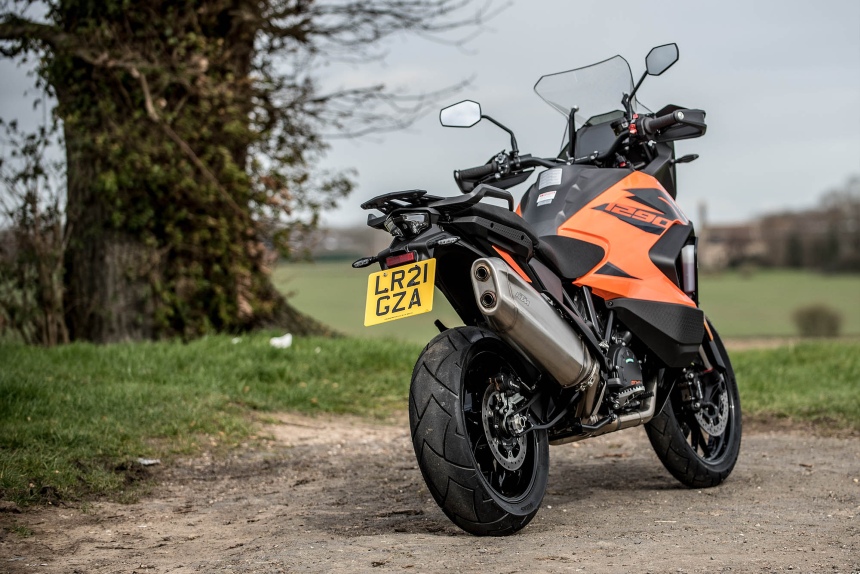 This bike can corner on tight lines and do so very securely. Lots of other aspects play a part in its toy-like, trustworthy feel. The upright riding position is both very roomy and comfortable, but just as importantly, it also allows you to boss the KTM about so readily, and with such great control. I really can’t believe it weighs a claimed 220kg ready-to-ride. When you’re chucking it around corners as happily and easily as I was, it gives you the impression it tips the scales at around 20 kilos less.

With the support and control offered by the superb electronically adjustable suspension, good grip from the Mitas tyres, and impressive stopping power of the Brembo brakes, riding harder feels remarkably safe and assured. Even when you get near the limit of the available adhesion, being in charge of the adventure bike still feels free of drama.

Doubtless, the electronic assistance, via a six-axis IMU, of features like cornering ABS and improved traction control, along with refined and faster processing semi-active suspension, very much help with this impression of mastery.

Easy as it feels to corner confidently on the KTM, so too does gaining speed. Altered in numerous subtle ways internally to pass Euro5 emissions rulings, thankfully the 1290’s engine retune has also prevented the 160bhp V-twin losing any peak power, even if maximum torque has been reduced a fraction.

For this year, the motor is lighter and more compact, and has been rotated forward by 2° to improve weight distribution. It breathes through a new exhaust system, has revised radiators to keep the rider’s legs cooler, and gearbox mods to improve the gearchange with the optional quickshifter.

I can vouch for this very slick action, as our test bike had the £1086 aftermarket Tech Pack software upgrade fitted, which includes the quickshifter, enhanced suspension options and action, extra adjustments for off-road use, hill hold control, and additional electronic slipper clutch control.

From the seat, the super flexible delivery is as prompt and punchy as always, and the throttle response is remarkably obedient to wrist-twisting. Some might find it a little too sharp for them in Sport mode, but although I did discover a calmer reaction when the Street option was quickly selected, I soon reverted back.

Happy and content with the exciting kick it provides whenever asked, I love the fact it makes moves like overtakes all the more clinical. Plus, it’s always nice to feel the significant thrust of healthy engine drive.

Some might argue an adventure bike having as much power as the 1290 has is pointless. I'd say having that much maximum power means there's plenty to sample at lower revs making the business of getting things done feel all the more relaxed. That's definitely the case with this machine and its gutsy midrange shove actually makes it feel very unhurried, even when it is getting a serious move on. 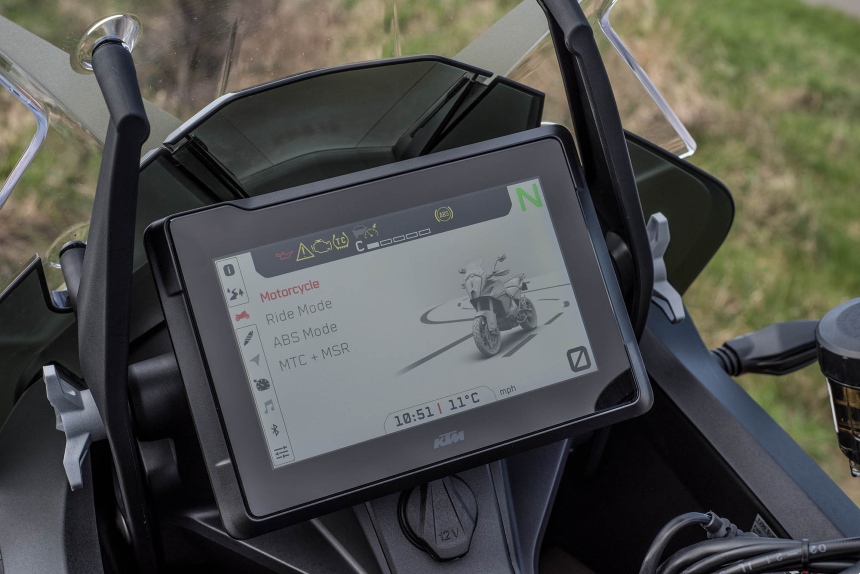 You have four riding modes to choose from; Sport, Road, Rain and Off-Road, which alter the amount of power and throttle response as well as the intrusion level of the traction control. Providing any of these choices at the touch of a couple of buttons is a swift and easy process and pretty much gives you all you want in terms of preferred engine performance levels.

The 1301cc motor offers on average between 40-50mpg to give a very realistic fuel range of 200-250 miles. If you can keep your use of throttle considerably more disciplined, then getting as much as 300 miles from the five gallon tank is probable.

Once the pictures were in the bag we set off on a 150-mile round trip to the highest point in south-east England, Walbury Hill, in Berkshire. It provided a good opportunity to check the KTM’s comfort level at more sustained speeds on dual-carriageways, with the hand adjustable screen deserving praise for its protective qualities and convenient height tuning.

The new 11mm lower, adjustable seat felt plush, though less than an hour between stops didn’t serve to test it to its fullest extent. Nor did the trial of the new 1290’s most novel feature, its adaptive cruise control. Just as its name suggests, it’s a cruise control system, which adapts your speed to the surrounding traffic via radar-influenced control over the throttle and brakes.

In short, if you set the bike to cruise at say 70 mph, it will only do so if the radar dictates it’s clear ahead. Should you catch slower moving traffic it will slow the KTM down until a safe distance is generated, and even brake if necessary – all automatically. It was fascinating to test, and worked really well and safely.

I’d have to try it for far longer than I did to pass a final verdict and I can already hear the voices of those who’ll dismiss it as unnecessary gimmick, and something that takes control from the rider. But I see it as a possible safety feature on somewhere like a busy motorway where you want a little judgemental assistance to take away some of the monotony of a long ride. Time will tell.

Is it the ultimate high-performance adventure bike? Yes, it probably is. Is it the most invigorating and stimulating? Definitely!

The new bike performed superbly in the day I spent with it and, to be honest, I couldn’t find anything it couldn’t do very proficiently. The thrilling Hayabusa test ride the previous day provided a tough-to-beat experience, but the KTM with its all-round brilliance and stimulation did indeed top it. It’s a hell of a bike and one I really wish I owned. I could put it to multitude of very good uses.