Never mind the supernaked segment, Aprilia’s Tuono V4 has always been one of the most capable, attractive and exciting machines on the market, full stop. And for 2021, Aprilia tell us that they’ve made it even better.

I absolutely love a super naked. In fact, I’d go as far as saying that it’s my favourite kind of motorcycle, with the Tuono helping to craft the class all the way back in 2002 – and being at the sharp end ever since. In nearly two decades it has seen some massive improvements, from facelifts to new engines and everything in between. And for 2021, the boys and girls in Noale have been busy refining the Tuono V4 range once again.

Unlike its faired sibling, which gets a new engine for ’21, the 1077cc Tuono V4 remains largely unchanged, with the same chassis, brakes, electric suspension and engine platform as before, albeit with some slight updates.

Most notable is the facelift, which not only brings the Tuono in line with Aprilia’s middleweight range but gives it a little bit more downforce too, thanks to the very on trend aerodynamic winglets. The engine makes the same power and torque figures as before, with 175bhp and 89 ft/lb of torque, but it is now Euro5 compliant courtesy of a new and lighter exhaust system, alongside the ability to rev 350 rpm higher.

The Tuono comes equipped with a raft of electronics that covers everything from cruise control to a quickshifter, but Aprilia have given it a more powerful ECU too, which allows for a few additional changes, including adjustable engine braking strategies. If you want to ride it hard, you’ll also be excited to know that they’ve also given it a new swingarm, complete with MotoGP inspired underslung swingarm bracing.

The Tuono has always been at the more ‘performance focussed’ end of the supernaked segment, but thankfully it’s not all about performance, as Aprilia have given the ’21 Tuono V4 a new and improved riding position for a little more room and comfort, thanks to the new seat and tank design.

Couple that with more wind protection and the new, larger TFT dash, and it looks like Aprilia really have ticked all the boxes on the new model. So, is it worth the £18,100 price tag, and is it the best all-round supernaked? Well, we racked up a couple of hundred miles to find out… 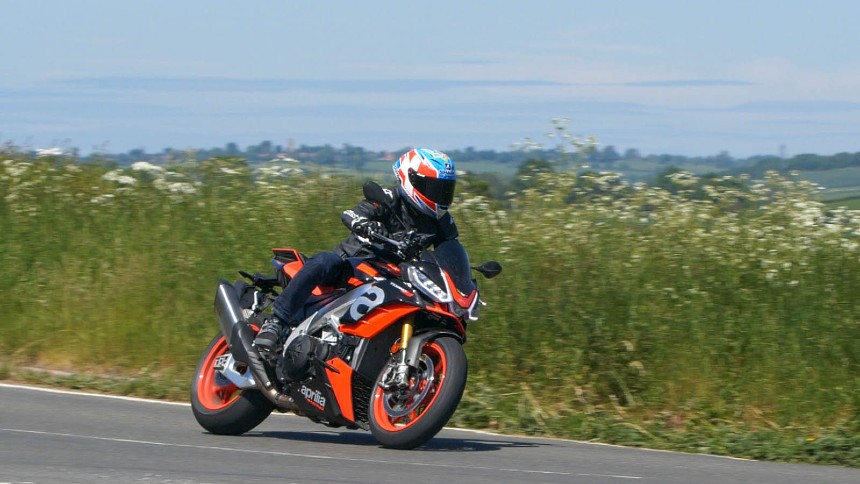 Gazing upon the Tuono V4 Factory for the first time, there’s no denying that it looks utterly sublime. Okay, it’s got so much bodywork it almost doesn’t pass for a naked anymore, but it has streetfighter style high bars and a nice blend of aggression and subtlety, that’s summed up by those well-hidden internal winglets.

The new dash is incredibly easy to both read and navigate, and the settings are an absolute doddle to navigate too. Thankfully, Aprilia have ditched the horrible joystick that used to be the control unit, and opted for some regular style buttons, which are much better.

Talking of much better, although the Tuono V4 Factory wasn’t exactly uncomfortable before, thanks to those little changes to the seat and tank it really does feel incredibly roomy. As you’d imagine, there’s an array of rider modes and customisable settings, but as the roads were dry and the weather was nice and toasty, I opted straight for ‘Sport’, for the most direct connection to that mighty V4 powerplant.

Even though it’s not the softest mode, it really does feel surprisingly poised and refined at low speeds, offering a subtle and smooth throttle connection when you’re under a few thousand RPM. In fact, the only niggle at slow speeds was the ‘shifter as, although it worked well enough, it did feel a bit clumpy when short shifting at extremely low revs.

But that isn’t what Aprilia made the Tuono for and let loose on the open road is where it really comes to life. With six settings on the suspension, I had the electronically damped Öhlins sitting in mid-point ‘A2’ setting to start off with and it was unbelievably poised, looking after not only the monstrous power delivery, but also the savage amount of braking power supplied by those Brembos as well.

I have to say though, on roads that aren’t exactly perfect it was fairly stiff for my 66kg frame over the bumps; maybe it’s down to the new swingarm or perhaps it’s just a stiffer suspension setup as standard, but after a quick switch to the softest mode, alongside a little bit of fettling to soften all of it a bit more, it felt amazing. It really does offer up an incredible feeling that’s so easy to play around with, working perfectly in sync with that glorious chassis.

The same goes for the engine as, when it’s let loose, the bellow from the exhaust and thrust of power on tap is just ridiculously addictive. I’d actually go as far as saying that it’s easily one of the best engines I’ve ever sampled in terms of smiles, excitement, sound and overall experience, which is a big statement.

What’s nice too is that it’s a real loony machine with the electrics dialled down, but when turned up that newer and more powerful ECU works absolute wonders by keeping everything in check, and if you were looking to take one of these on track, I reckon that they would be devastatingly effective. Especially so when you consider that it comes equipped with super sticky Pirelli Supercorsa rubber as standard.

But then again, thanks to the cruise control and that new windscreen, it’s actually more than happy to sit on the motorway, cruise along and be comfortable for a full day in the saddle… even if the fuel consumption isn’t exactly top notch for big mileage. But then again, you can’t have everything, can you? 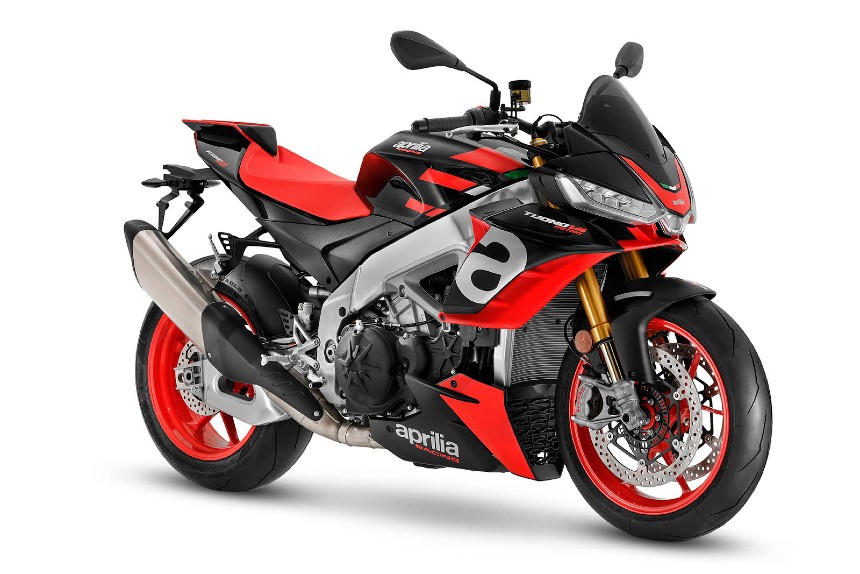 The Tuono V4 Factory doesn’t really look that much of a naked, but it is certainly all kinds of super. Sure, it’s more expensive than the likes of the KTM SuperDuke R and Triumph Speed Triple 1200 RS which are close in terms of power figures, but it’s also spec’d up with electronic suspension – which those machines don’t come equipped with. If you’re after that, it’s cheaper than Ducati’s Streetfighter V4S and it is nothing short of epic.

Think of it as being 99% of an RSV4 Factory when it needs to be, but in a kinder package that’s more suitable for the road… And cheaper, too! Sure, it’s not perfect, but it’s very close; if you want something that will make you smile after every ride, then this is the bike for you. But be warned, it does encourage bad behaviour!

From full race systems to external road vests, airbags have become an increasingly integral part of a riders’ gear over the last few years. So just how effective are they? Carl Stevens had the chance to try one out.