Over the past five years or so, the super naked and hyper naked motorcycle category has boomed. From what started out as detuned superbikes with the fairings ripped out, these ‘street fighters’ have gained a huge following from riders looking for big power with a more forgiving upright riding position.

As if super naked machines like the BMW S1000R and Yamaha MT-10 weren’t quite powerful enough, to qualify for hyper naked status, a 1000cc capacity usually doesn’t quite cut it, unless it’s supercharged in Kawasaki’s case.

With Triumph coming on board with a new, 1160cc, Speed Triple and many of the class leaders receiving upgrades, 2021 sees the class become even more hotly contested.

Which are the standouts? Here are our top five bonkers hyper naked motorcycles for 2021.

Aprilia’s RSV4 derived big capacity Tuono has long been regarded as one of the best – if not the best – hyper naked motorcycles on the market. And it has some key updates to show off in 2021 trim. In a nutshell, Aprilia have refreshed the Tuono’s styling, performed chassis tweaks and introduced a more comfortable and protected riding position for better long distance comfort.

The bike’s new look brings it in line with the brand new Tuono 660, which includes a revised half fairing and a bigger screen. Aprilia say this, coupled with a more comfortable riding position thanks to the altered tank and tail unit design will make it better for longer riders.

The inclusion of aerodynamic wings, which are now a regular site on both superbike and hyper naked spec machines, are built into the fairing to help deliver downforce and improve handling. Although, how effective wings are away from the racetrack and on your favourite B-roads are yet to be seen.

The swingarm is now a lighter aluminium unit which has come straight from MotoGP and World Superbike technology, with its lower reinforcement brace first seen on the Italian firm’s world championship racers. The Tuono’s howling V4 engine remains virtually unchanged from the outgoing model, giving out 175 bhp and 89lbft of torque from the 1077cc V4 motor, but it’s now compliant with the latest Euro5 regulations. 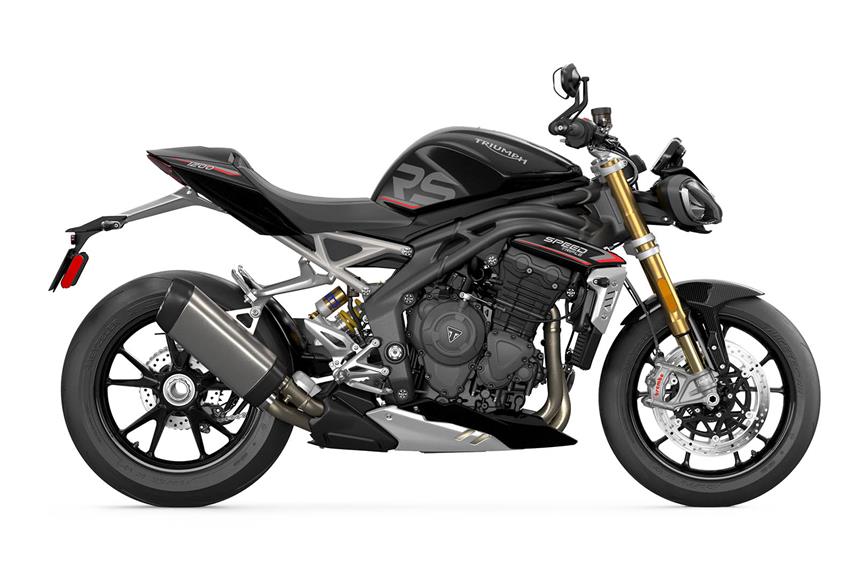 The all-new Triumph Speed Triple 1200 RS launched in January is the latest model to enter the hyper naked category. It’s one of few bikes that can truly wear the “all-new” title, too.

The Hinckley factory’s famous Speed Triple comes complete with a brand new 1160cc three-cylinder engine making a healthy 178bhp, which makes it the most powerful bike Triumph have ever produced. The motor is the same dimensions as the old one, but it’s housed in a ground up new chassis design that’s lighter and sharper than before.

With a wet weight of 198kg, the 2021 Speed Triple is 10kg lighter than the model it replaces. Both the frame and engine are considerably lighter over the previous generation bike, and the engine is claimed to have 12% less inertia, which helps acceleration and handling.

Suspension on the RS is from Öhlins and fully adjustable of course, with 43mm NIX30 forks and a TTX35 rear shock. Brakes are Brembo’s top-end Stylema calipers and Metzeler Racetec RR rubber wrap around the cast aluminium wheels offering all the grip you’re ever likely to need.

The premium components on the Triumph are exactly what you’d expect to be on a £15,100, 180bhp motorcycle, and so are the sophisticated electronics. Riders are offered five riding modes – Rain, Road, Sport, Track and Rider – which thanks to the ride by wire throttle, response is adjusted according to the selected riding mode, as well as the traction control and ABS settings. 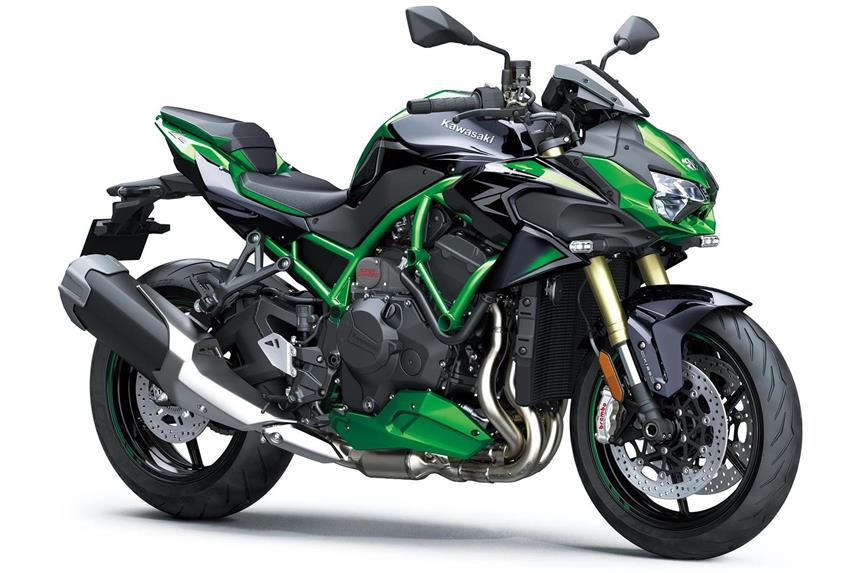 If you want a supercharged production motorcycle right now, Kawasaki’s H2 range is your only option, and there’s a new model in 2021 in the shape of the naked Z H2 SE.

The big technical change that distinguishes the Z H2 SE from the standard Z H2 is the addition of Showa ‘Skyhook’ semi-active suspension. It’s the same kit that’s found on the Versys 1000 SE and uses a computer to constantly tweak the suspension settings to respond to the bike’s movement over different road surfaces, in theory making for a plusher, more planted ride.

But the basics of the SE are unchanged compared to the standard bike. That means a detuned version of the barmy fully-faired Kawasaki H2’s supercharged 998cc four-cylinder motor, with 197bhp peak power at 11,000rpm, a tubular steel frame and marmite styling with an exaggerated air intake on the left hand side which feeds the supercharger mounted behind the engine. 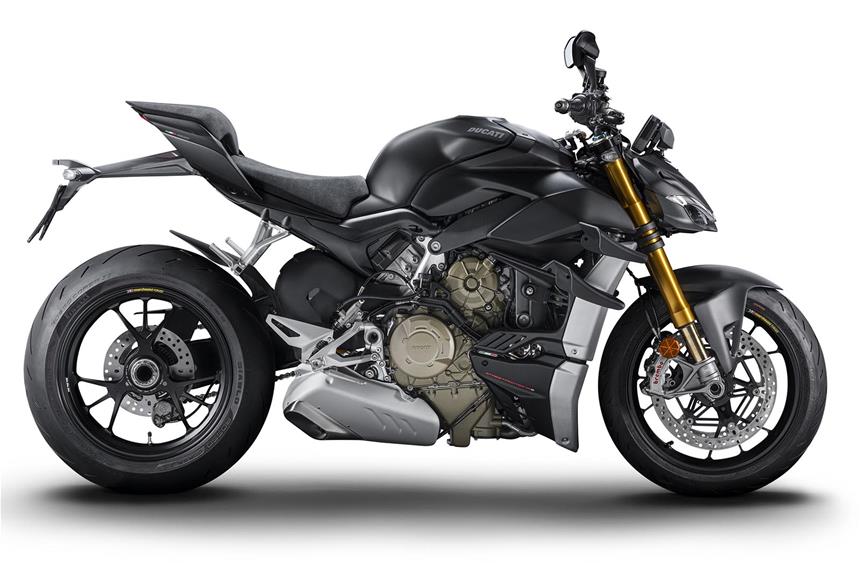 For some, the most desirable in the hyper-naked class is Ducati’s newest offering, the Streetfighter V4. It’s heavily based on the Panigale V4 superbike and is incredibly powerful and seriously fast. 2021 offers very little difference over last year’s model, with just a new “Dark Stealth” colour scheme becoming available for the ‘S’ version, and the transition to Euro5 compliant motor the headlines.

The Italian firm’s original Ducati Streetfighter 1100 loved to wheelie and had an extreme Supermoto-style riding position which made it quite a niche offering, and it was never that popular. Fast forward to the new V4, and it’s a different story.

It’s a Panigale V4 stripped of its fairings, with high, wide handlebars for comfort, weighing 178 kg on the scales and powered by an 1103 cc Desmosedici Stradale motor derived from the 2014 MotoGP Desmosedici GP14 racer. It delivers an eye-watering 208 bhp, with all that power kept in check by biplane wings and a refined electronics package.

There are three riding modes which cover every eventuality – Street, Sport and Race – with the impressive electronic aids the same as the Panigale superbike’s, offering lean sensitive traction control, ABS, quickshifter, anti-wheelie and engine braking control.

If money was no object, this is the hyper-naked we’d all go for, isn’t it? 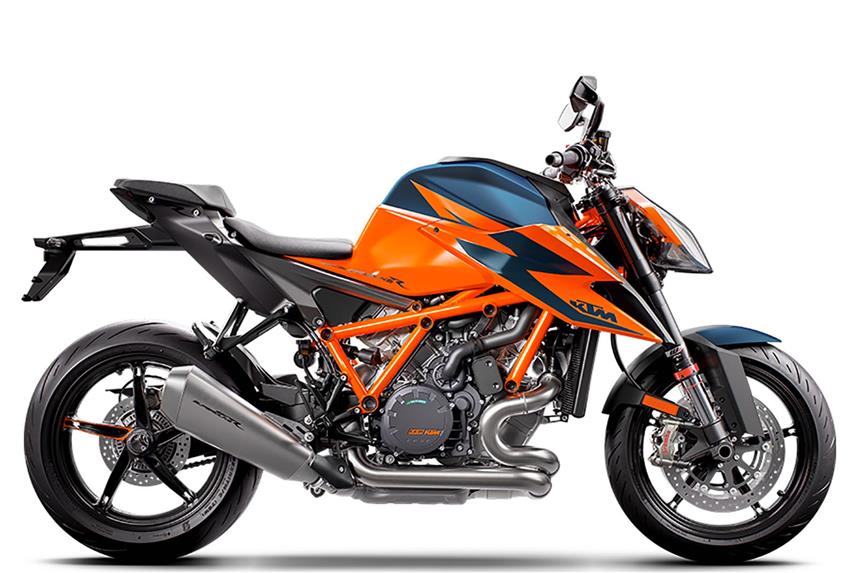 The exceptional KTM Super Duke R epitomises what a hyper naked bike is, and in 2021, it’s leaner and even meaner than before.

A brand new chassis design, which uses the engine to increase torsion rigidity, has resulted in the Super Duke being three times stiffer than its predecessor in an attempt to inspire more rider confidence and make for the ultimate fast riding experience. By using thicker diameter tubes with thinner walls on the trellis frame, has meant an impressive 2kg weight saving, too.

Along with the stiffer frame, the pivot point in the single-sided swingarm has been repositioned 5mm higher, which sounds neither here nor there, but helps stop the rear from ‘squatting’ when laying the 1290 R’s power onto the asphalt.

Subtle changes have been the order of the day for the rest of the KTM in terms of the motor, styling and electronics, with the KTM’s power plant still producing 180bhp from its 1,301cc LC8 V-twin. In the looks department, a sharper-looking rear end is thanks to an all-new subframe, the 16-litre tank has a revised shape to support riders better, and is completely made from steel.

If that wasn’t a wild enough package, there are rumours of the Austrian factory releasing a double-R version of the Super Duke. If true, that’ll be some ride!