Known as the supersport class, 600cc sportsbikes hit the peak of their popularity in the early 2000s. Packed with racetrack technology, these mini superbikes were hugely popular with younger riders and racers alike. Manufacturers poured massive resources into the class in a bid to stay ahead in the sales charts and in supersport championships worldwide.

The global financial crisis of 2008, allied to changing tastes, saw the class take a battering. Sales declined and most manufacturers didn’t bother developing new models to get through the latest round of Euro4 regulations, but despite new bike sales of supersports being on the floor, these racy machines remain hugely popular on the second hand market.

And with talk of several manufacturers considering revisiting the middleweight sports class in 2019, we at Insidebikes rattled our brains to think about the best 600s to have come over the years. There’s been loads around, so there’s every chance you’ll disagree, but here are our top five supersport 600s…

Controversial? Think of a Kawasaki supersport bike and the chances are that it’s not the GPZ600R, but without this the class might not even exist.

This is the bike that set the blueprint for the class. Four cylinders, check. Water cooled, check. Full fairing, check. Before 1985, sporty middleweight bikes were dull but worthy air-cooled efforts like the GPz550, XJ550 and GS550, but this was a smaller capacity version of the iconic GPZ900R Ninja, the top dog of the time. The die was cast. Within four years it has spawned competition from the Honda CBR600F, Yamaha YZF600R and Suzuki GSX600F. This is supersport genesis. 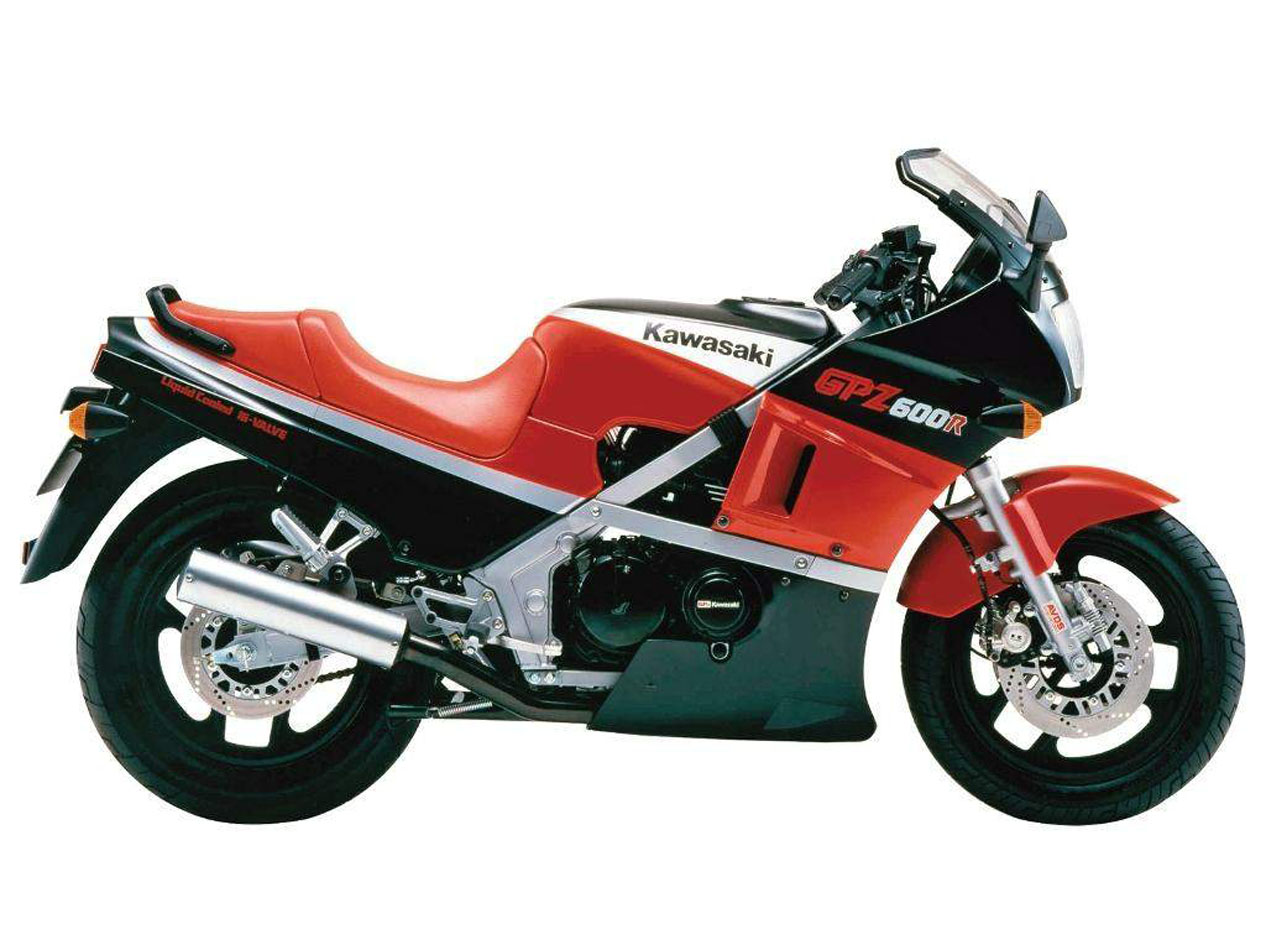 Today it looks of its time with its 16” wheels, air assisted forks and sit in styling. It’s also a forgotten classic, in the shadow of the 900 and the 600s that followed. Kawasaki went on to have quite a record in the 600 class. The GPZ evolved into the GPX600R and onto the ZZR600, which was big, comfy and faster than a 1990s 600 had any right to be. Then came the ZX-6R line, which has won numerous supersport championships and continues today, but without this forgotten hero, who knows what would have become of the class.

Honda was the last of the major manufacturers to really get in on the supersport explosion of the early 2000s but, true to form, when it did come to the party they really stole the scene.

The CBR600 goes all the way back to 1987 when the CBR600F (known as the Hurricane in America) was introduced. Kicking out 85bhp, the CBR featured period jellymould styling and was a big seller. It even won in world championship racing. 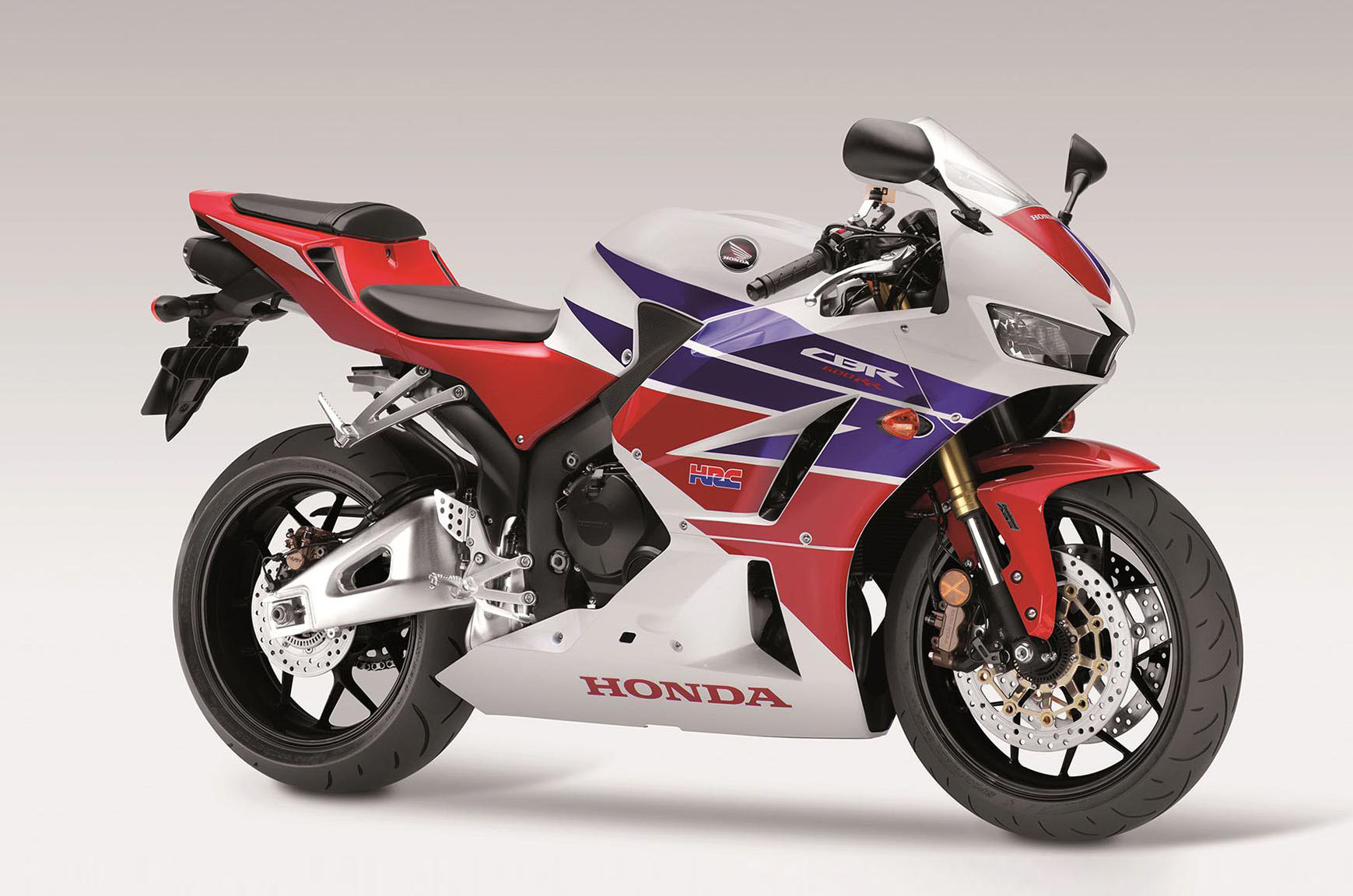 The F evolved but remained a conservative option in the middleweight class. That all changed in 2003, when the CBR600RR was introduced. Despite styling nicked from Valentino Rossi’s RC211V MotoGP bike and technology to match, the RR wasn’t the most bonkers supersport bike in the class. It was the most rounded though, and dominated racing. In the hands of the Dutch Ten Kate racing team, it won the Supersport World Championship every year from 2003 to 2008 and remains on the grid today, even though the model has not been on sale in Europe for several years.

The 600cc class has never really been kind to Suzuki but, back in 1998, the Hamamatsu company was the short lived king of the supersports.

As the category emerged in the late 80s, Suzuki’s budget GSX600F couldn’t hold a candle to the watercooled competition. The liquid cooled RF600R came along in 1994 but was big and bulky, and once again proved to be a poor relation to its rivals. 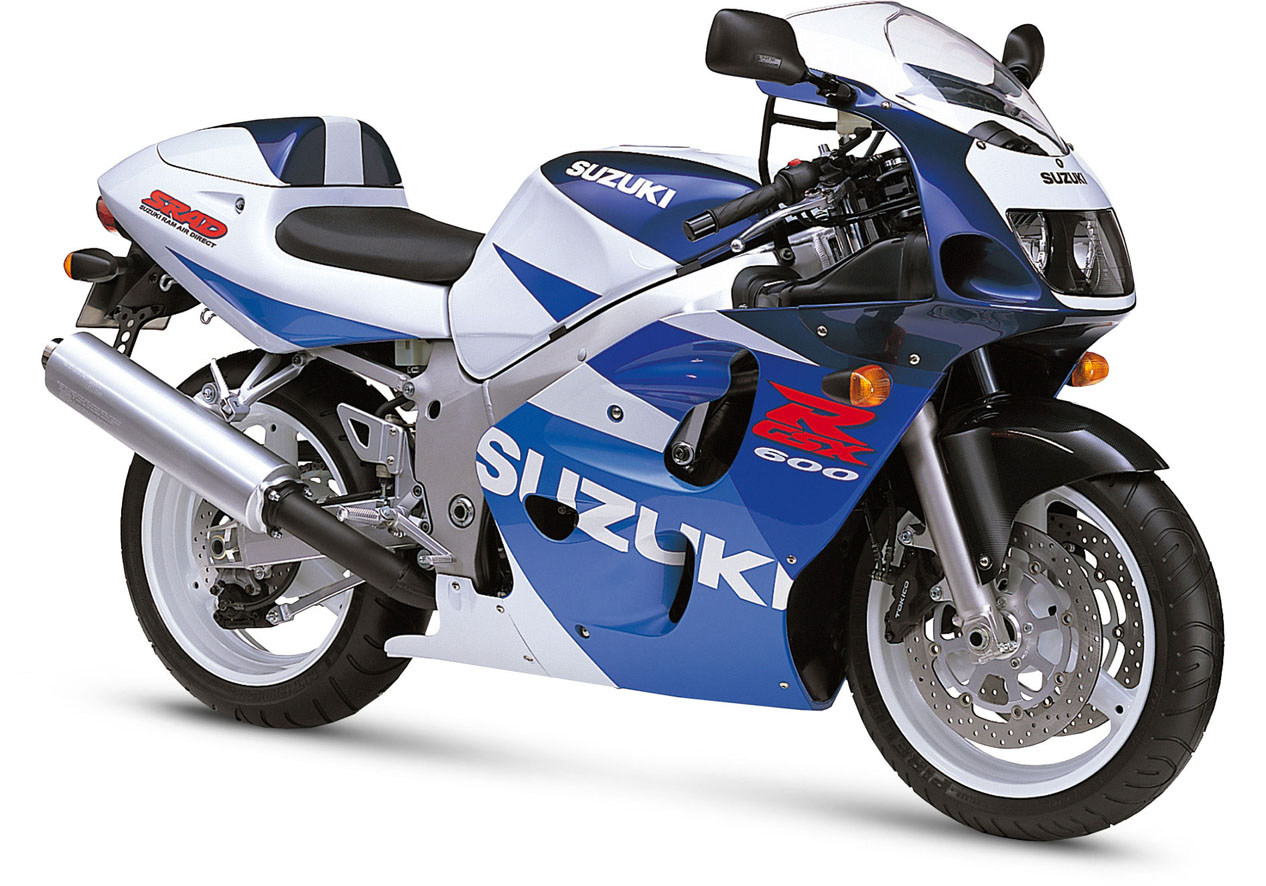 The baby Gixxer was virtually indistinguishable from the bigger bike, wearing conventional forks to the 750’s upside down suspenders, and it proved to be a massive hit on the race tracks. Italian rider Fabrizio Pirovano won the Supersport World Cup on the Alstare Corona GSX-R600 in 1998, with Frenchman Stephane Chambon taking the first full world title the following season.

Yamaha came along and ended the GSX-R’s reign with its 1999 R6 and Suzuki went back to being the bridesmaids again.

There was never anything wrong with the GSX-R600, but it found itself not in the shadow of its rivals but rather its bigger brother. Other manufacturers offered just a 600 and 1000 model in their sports line up but, over the years, Suzuki’s 600 remained a slightly lower capacity, lower powered and lower specced version of the GSX-R750, so it was hardly surprising that many buyers opted for the slightly bigger model instead.

Over the years, the 600 and 750 were developed in parallel, but these early SRAD examples offer super cheap performance for the budget trackday fans. Many will have been raced and/or abused, but these 600s can be picked up for a song.

Even though they represent a changing point in the supersport 600 class, these early Suzukis are highly unlikely to be bona fide classics – denied of the right by its more illustrious bigger brothers.

In many ways, Yamaha’s R6 is the definitive supersport bike.

Launched in 1999 as a replacement for the bulbous YZF600R Thundercat, the R6 shared DNA with the bigger R1 and R7, but was an all-new standalone model.

From the beginning, the R6 was a hero on the road and on the track. It was the bike to have in supersport racing and down the pub car park, and Yamaha knew it. The R6 was regularly updated to keep it at the front of the pack, but the legend we focus on here is the long lived 2006 model. 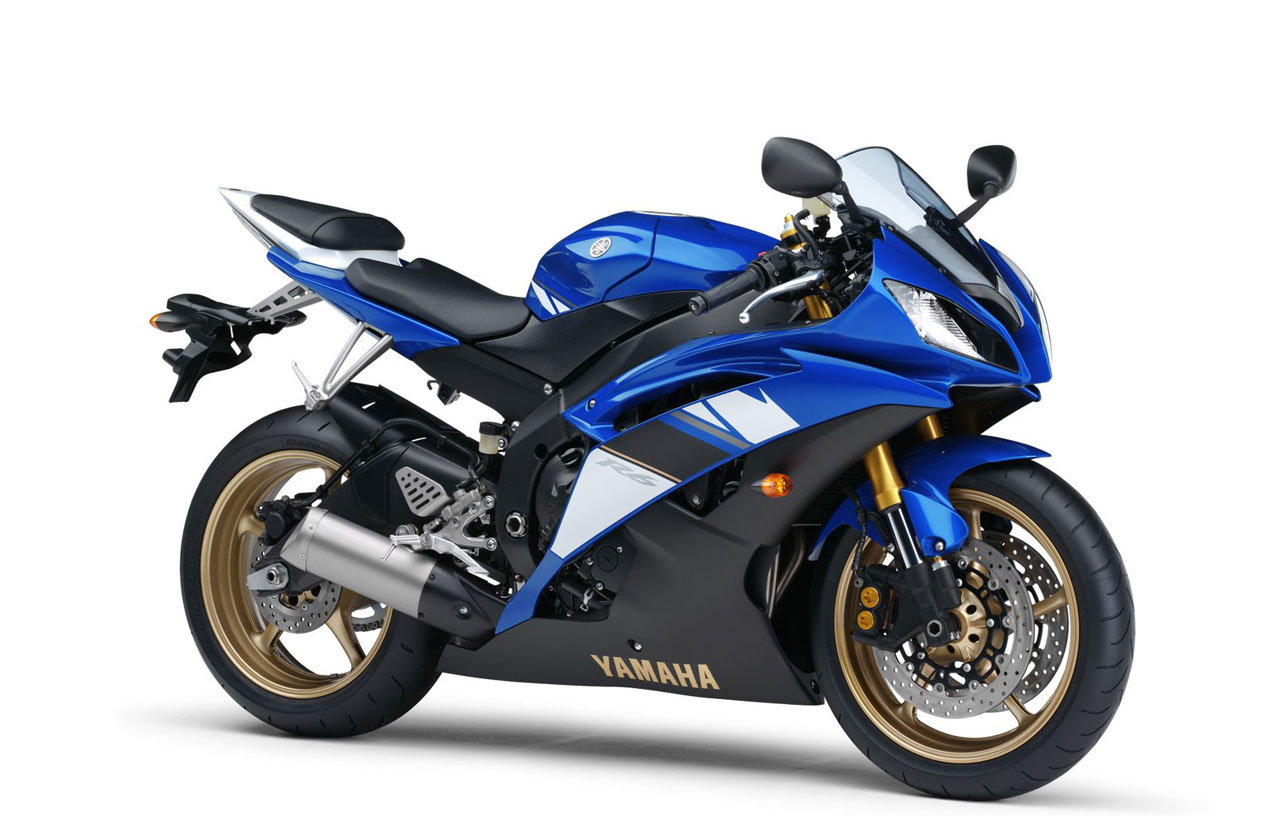 With a new frame, ride by wire and a slipper clutch, the aggressively styled 2006 model was a rev happy beast that needed a skilled pilot to get the best out of it, but with a good rider on board, there was little that could touch an R6.

Yamaha’s marketing men got all excited about the claimed 17,500rpm red line, although embarrassingly that proved to be somewhat optimistic (the real limit was more like 15,500rpm) and the company ended up buying back some bikes from disgruntled customers.

Not that they should have been too unhappy. The R6 still moved the game on and new variable length intake trumpets added a modicum of mid-range from 2008 onwards. This bike became the staple machine on pretty much every supersport racing grid, even though road bike sales hit a massive slump due to the worldwide ‘credit crunch’. Cal Crutchlow, Chaz Davies and Sam Lowes all won Supersport World Championship titles on this model.

Euro4 emissions regulations finally killed off this longest running version of the R6, but despite minimal interest from road riders in new sports 600s, Yamaha brought out a new version for 2017.

This machine was based on the previous version, with better suspension and electronics, but made less power (117bhp, against 122bhp) and gained a kilo as it adopted the latest emissions gubbins. For racers, this latest model is the must have supersport machine, but for many road riders the 2008 example remains the definitive 600cc sportsbike.

Yeah, we know it’s not technically a 600 but the Triumph Daytona 675 remains such a historically important bike in the British brand’s history that it’s impossible not to include it in this list.

Such was the importance of the 600 class in the late 1990s, the plucky Hinckley company felt it had to go wheel-to-wheel with the Japanese giants and bring out its own four-cylinder 600. Up to that point, Triumph had largely gone its own way, filling niches in its individual way, but the TT600 that emerged in 2001 was a complete disaster. 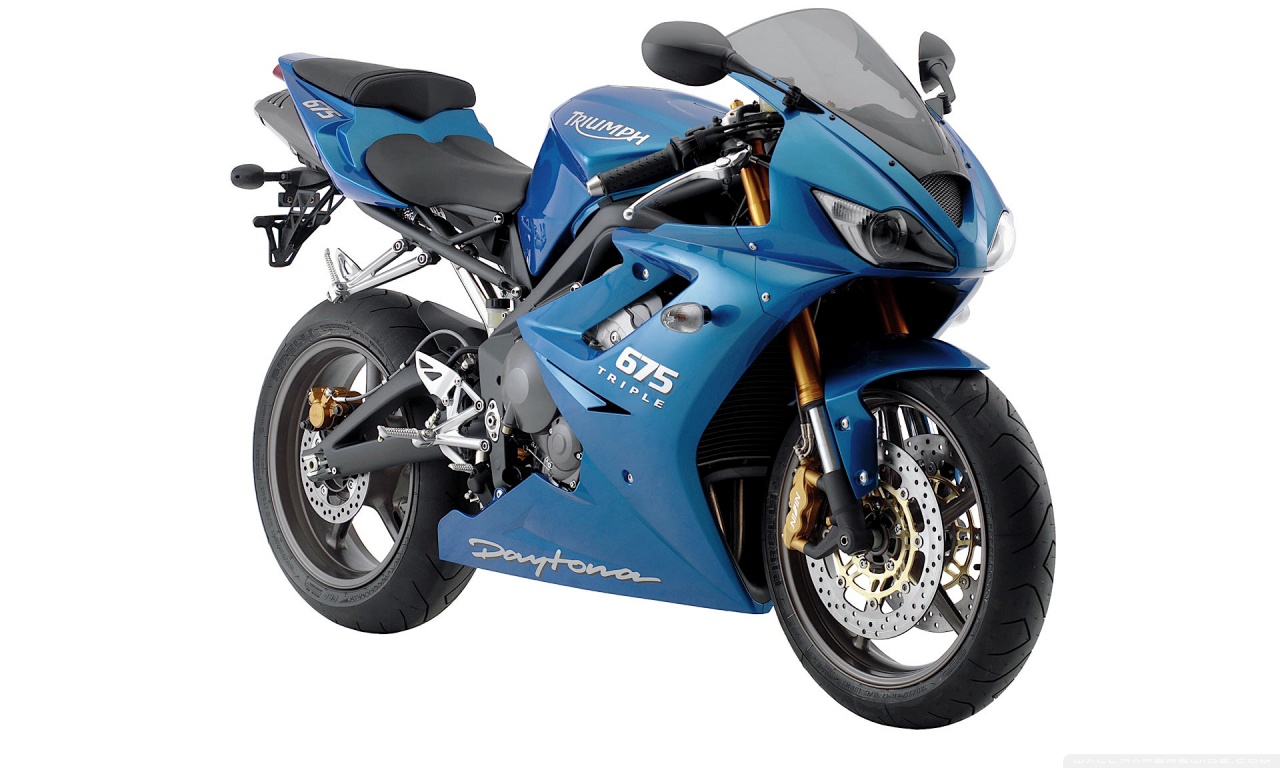 Not only was the fuel injected engine (a novelty at the time) jerky and awkward to ride, the styling looked dated the minute the covers were pulled off. Triumph clearly used the jellymould CBR600F as its benchmark when designing the TT, but unfortunately it went into production just as Suzuki and Yamaha moved the game on with the GSX-R600 and R6. Nightmare.

The TT600 evolved into the Daytona 600, which even won at the TT, but it was too late to recover Triumph’s reputation in a class where image was everything.

So Triumph went back to the drawing board and did its own thing again. The result was the Daytona 675 Triple, a new from the ground up three cylinder 675cc design that became an honorary 600.

The stats stacked up against the competition too. With 123bhp and a 165kg dry weight, the Triumph was bang on the money compared to its Japanese rivals, even though that was only half the story. The tall and narrow chassis handled sublimely, while the handsome looks and understated colours were classy compared to the shellsuited 600cc competition, without being all fuddy-duddy.

The Daytona was allowed in alongside the 600s in supersport competition and although the factory never really got behind a world championship effort, it did win numerous British championships and a supersport TT. In magazine group tests, the British bike generally came out on top. It was a sports bike that could make even the most average rider feel like a hero.

Indeed the Daytona 675 was so right first time out that it never really got much better. The 2009 model had around 50 small improvements for a little more power and a little less weight. These are arguably the best of the breed. The 2013 bike was pretty much an all-new design, with a short-stroke motor, but the jury was out as to whether it was actually a better bike than the 2009s.

In many ways, it didn’t matter. By 2013 the supersport bubble had burst anyway and the Daytona 675 struggled for sales, but that shouldn’t detract from the model’s legacy – as the bike that showed that Triumph could finally take on the world. And win.