Electric motorcycles have been significantly improving over the past decade and with the constant refinements, have become a realistic option for an increasing number of riders. Within the last 18 months in particular, battery power has stepped up to a level in which they can be directly comparable to traditional internal combustion engine machines.

Californian manufacturer Zero Motorcycles has led the way with their varied street and dual sport model line-up, ranging from CBT-legal sub-£10k bikes, to the performance focused super-naked SR/F and SR/S sports tourer. And surprisingly in 2019, Harley-Davidson became the first mainstream manufacturer to go electric, with the extremely impressive LiveWire, which global adventurers Charley Boorman and Ewan McGregor rode from Patagonia in Argentina to California in the USA in the “Long Way Up”. 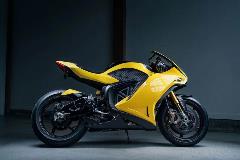 New Canadian firm Damon Motorcycles has four variants of its sports bike styled Hypersport model – the Premier, HS, SX and SE. The Hypersport HS will cost around £19,000 and have a claimed 200bhp, 200-mile range and a 200mph top speed. The top-end £30,000 Premier version comes fitted with a single sided swingarm, trick Öhlins suspension and Brembo brakes.

The differences between each model doesn’t just stop at performance, charging times differ too. The base SE takes eight hours to charge to 90% using 110v output, with 11 hours needed for the SX, and the HS and Premier taking 15 hours. Using a 240v charger will reduce that time for the SE to 1.5 hours, two hours for the SX and 2.5 hours for HS and Premier. Level three DC fast charging is, as the name suggests, the quickest way to power up, with all four models needing just 45 minutes to reach 80% capacity.

The whole Hypersport range uses Damon’s Copilot system that includes 360-degree cameras to warn the rider of danger using haptics in the handlebars and LEDs in the screen, and their Shift system that allows the foot pegs and handlebars to move electronically between riding positions.

Many new electric companies make big promises that never see the light of day. Are Damon the next big dreamers, or will they really shake up the electric bike market? We should find out all in 2021! 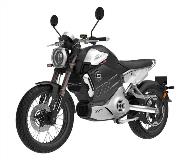 Contrary to popular belief, not every modern electric motorcycle is an expensive piece of technology. Take the Super Soco TC MAX, for example. For licencing purposes, it’s a 125cc equivalent motorcycle that can be ridden by anyone aged 17 or over with just a CBT, costing £3,825 with their current offer, or usually £4,249.

It has a range of up to 60 miles and can be fully charged in seven hours from a domestic plug socket. The battery is removable and charged off the bike, perfect for those living in flats, and the latest version is able to reach speeds of 60mph too, which if you’re wanting an urban commuter, is all you realistically need. And it doesn’t get much more cost effective than just 1p per mile!

It also features a tidy little app that can track the bike's location and run diagnostics to check for any potential faults, too. So, if you’re after a cost effective, convenient and fun way of getting to and from work, this could be the ideal machine in which to do it. And it looks cool, too. 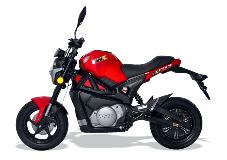 Sticking with affordability, this is the WK E Colt, which is equivalent to a traditional 50cc scooter and can be ridden on a CBT. One of the most appealing things about this bike is its price tag, costing £1,899 brand new. There aren’t many new motorcycles you can buy for under two grand, let alone electric ones, offering a realistic route into electric bike ownership for plenty of people.

As you’d expect for the price tag, the range is the shortest on offer compared to the other bikes in this list at 37 miles, has the least equipment and the top speed is 28mph. But as an inner city commuter or an everyday town bike, the cost effectiveness of electric power, no fuel cost and very little maintenance compared to a 50cc scooter equivalent makes the WK E Colt a very attractive proposition. It’ll beat taking a crowded train or bus every day, that’s for sure. 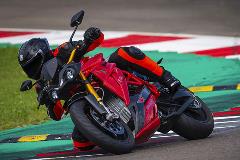 If you’re a MotoGP fan, you may well already be familiar with the Energica name as they provide the full grid of bikes in the MotoE support class, and they’ve decided to give their three models the RS (Reparto Sportivo, or Sport Department) treatment.

Each of the manufacturer’s three machines, the Ego+, Eva Ribelle and Eva EsseEsse9 get the RS badge which means new engine mapping modes. These new modes help the bikes clock a 0-60mph time of 2.6 seconds, 0.2 seconds quicker than standard models. Like the standard models, however, each model comes with the same four riding modes, Urban, Eco, Rain, Sport, as well as four regenerative maps, Low, Medium, High, Off (if you count Off as a mode…).

The RS models are all powered by a large capacity 21.5kWh battery, with a claimed 248 mile range on one charge, and come with fast charging technology, 4.3’’ TFT colour display, traction control, cruise control, and park assistant as standard features.

Prices haven’t been officially announced yet, but expect to pay north of £20,000, as the standard models already cost more than that. 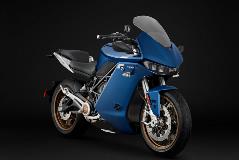 The SR/S by electric bike manufacturer Zero Motorcycles is the Californian firm’s flagship bike, starting at £19,590 for the base model and costing £21,590 for the Premium version, which comes equipped with a 6kw rapid charging system and heated grips. You can knock £1500 off those prices though, because (as with the Energica models and Harley-Davidson LiveWire) the UK government give you a grant to encourage you to go electric.

The bike was brand new for 2020 and uses the same Z-Force motor and 14.4 kWh Z-Force Li-Ion battery as its naked SR/F sibling. Where it differs is its sport tourer riding stance and fairing. It’s in fact the first Zero to come fully-faired, which they claim increases efficiency and range by 13% on the motorway, when compared to the SR/F.

As you’d expect for a near £20k price tag, everything about the SR/S is premium, including the Bosch MSC system providing ABS, traction control, and torque control. There’s four riding modes that alter the power and level of the motor’s regeneration (the amount of energy it puts back into the battery on a shut throttle) of the Zero to suit most riding conditions – Eco, Rain, Sport and Street. The regeneration when you close the throttle feels like traditional engine braking, and helps you slow down without touching the brakes.

Riders can also create their own custom mode to suit their needs perfectly using the Zero app, applying just the right balance of power and regen for each individual. The bike’s smart Cypher III operating system also provides details on every aspect of the bike, from energy usage, lean angle and range neatly displayed on the TFT dash.