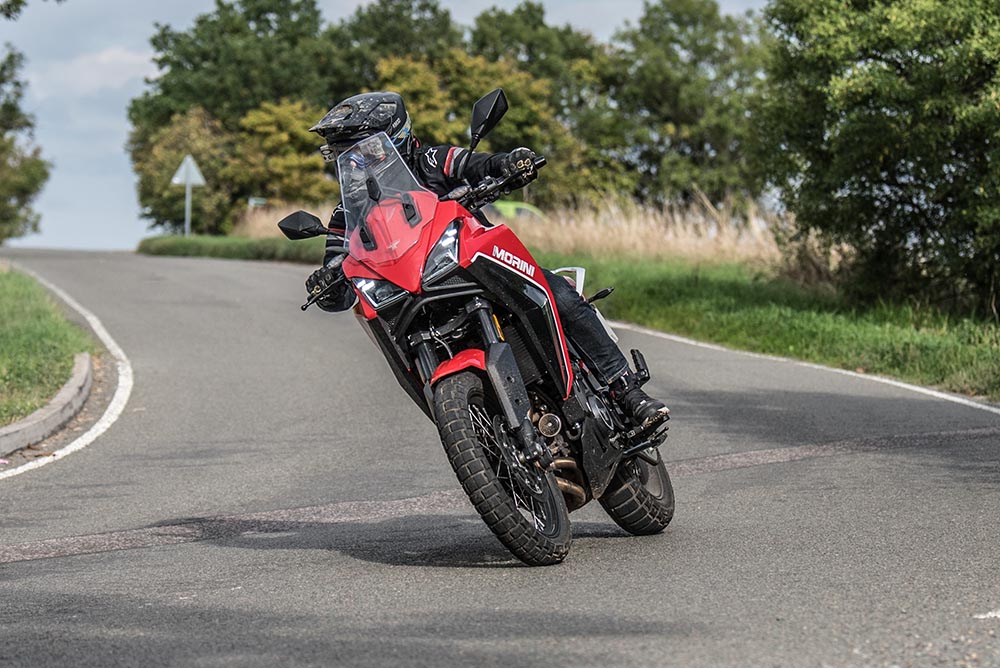 Here at Insidebikes, we absolutely love an adventure bike. Comfortable enough to rack up serious mileage, fast enough to keep things fun, capable enough to tackle just about anything and all wrapped up in a neat, attractive package. But that package usually comes at a price; like with just about anything, prices of big adventure bikes has skyrocketed over the past 10 years, exacerbated by their class-leading tech and incredible popularity.

But then again, not everyone wants a motorcycle packed with all the electro gizmos, and there have always been some great options for those on a budget.

On the flipside, Suzuki’s more road-biased and trusty V-Strom 650 starts at £7,999, with Triumph’s more road orientated Tiger Sport 660 setting you back £8,725. Yet the X-Cape 650? Well, that will set you back a mere £6,999, although the model we tested came with those smart spoked wheels and comes in at £7,499 – still, cheaper than just about anything else. 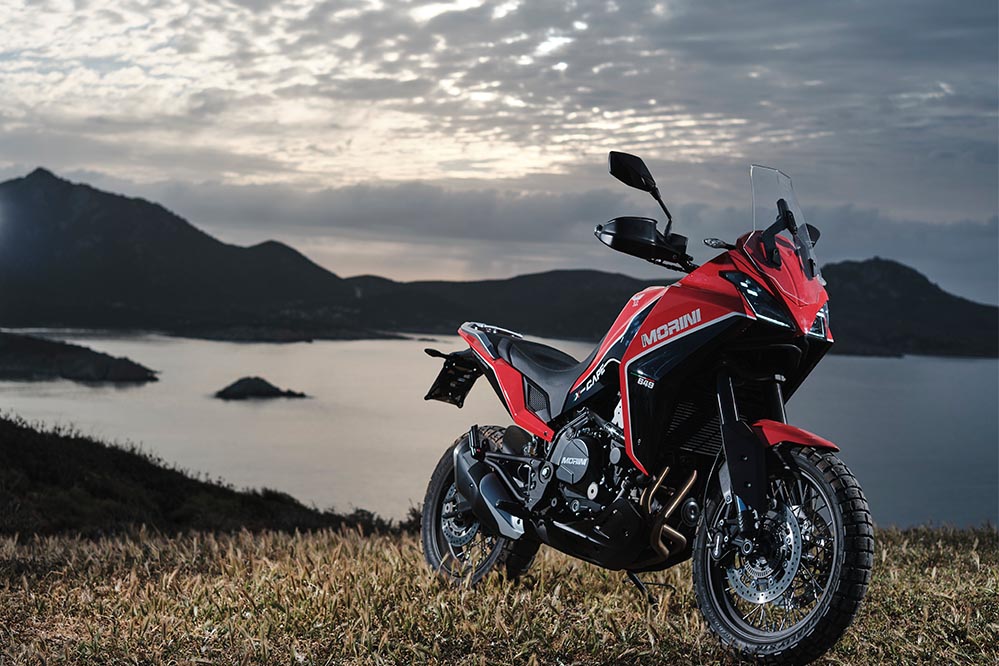 And looking at some of the components and tech, that’s a bit of a surprise. You get fully adjustable Marzocchi suspension, twin piston Brembo calipers, braided brake lines, Pirelli Scorpion Rally STR rubber and a whopping 7” colour TFT dash, two rider modes, switchable ABS from Bosch, Bluetooth connectivity and even phone connectivity, alongside an included double USB charging port.

You also get a 19” front wheel that means there’s a decent 190mm of ground clearance, an adjustable screen, LED headlights and a pretty hefty 18 litre tank too. That makes the Moto Morini X-Cape 650 a lot of bike for the money.

On the flipside though, the X-Cape’s spec sheet doesn’t look to set the world alight. Powered by a 649cc parallel twin motor, the claimed power and torque sits at 60bhp and 54Nm, which although sounds reasonable, is fairly tight considering that the X-Cape will weigh in somewhere around the 230kg, fully loaded. Saying that though, it’s not made to be a big, willy-waving powerhouse; it’s made to be a premium machine, at a budget price. So, does it perform like one?

Seeing the Morini in person, it sure does talk the talk. Considering that at heart it’s ‘just’ a relatively cheap twin, it does ooze some serious Italian charm in its appearance, looking not only smart, but reasonably well finished too.

The same goes when jumping on top; sure, it’s not perfect, but the view in the cockpit is something far greater than I would expect for the price and although it’s not the smallest bike in the world, thanks to the narrow parallel-twin engine configuration it doesn’t feel too tall or unbalanced – just nicely thought out.

Talking of nicely thought out, the adjustable screen is a fairly simple design that is changeable with one hand but by far the most impressive feature is the massive, TFT dash, which offers up not just a range of functionality but also delivers all the information in a clear and concise manner, which is easy to toggle through the simple, and fairly basic switchgears.

Lacking some character and edge

I have to say though, firing the Morini into life didn’t exactly inspire me with excitement. With a fairly hefty wet weight, combined with some fairly conservative power figures I was hoping for a little bit of character and edge from the engine, but in all honesty it does lack a little in that respect.

Don’t get me wrong, it’s incredibly smooth lowdown with a really soft clutch, but it just doesn’t have that pull that I’d like to see in a twin not only at the lower end of the rev range, yet even as the revs slowly rise, they don’t really do so with much conviction; there’s just no urgency or excitement as it edges towards the redline.

It will still happily cruise at 70mph and it should be good to get over the three figure mark in terms of mph (we can imagine) but with 60bhp on tap (an A2 kit is also available) it sits somewhere between Honda’s CB500X and 650s like the Kawasaki Versys, although the aforementioned higher end middleweight adventure bikes all offer more performance and more refined gearshifts – albeit for a chunk more money. 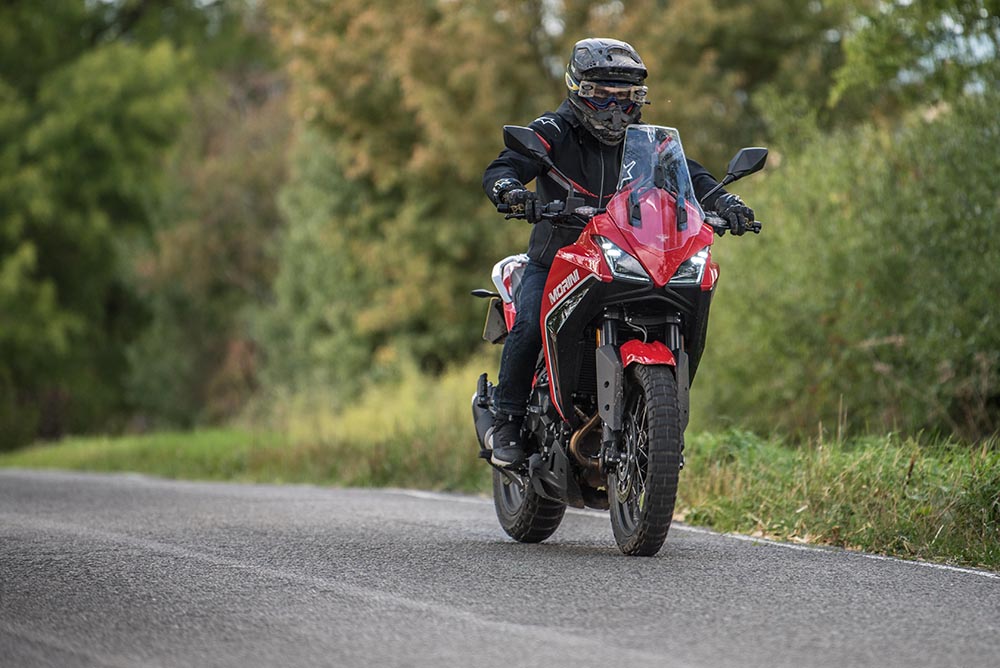 Maybe I’m being harsh as it’s by no means a bad engine and it’s very frugal too, but personally, I just like a little more ‘oomph’ when I’ve twisted the throttle. But then again, it did redeem itself when it came to handling, as the chassis and suspension combination does do an ample job at offering up a positive feeling when it comes to cornering.

Not only are those Brembo branded brakes quite effective in terms of stopping, but Morini have hit a really nice spot in terms of the suspension as although it does take care of you over bumps and potholes, it’s actually plush enough to push on a bit too, without too much weight transition through those fairly long-travel forks. The fact that they’re adjustable is a big bonus too, and I have to mention that even after a few long journeys, the Morini did provide  a good level of comfort as well.

And we didn’t just test it on the road, as the X-Cape even does an admirable job on the trails too, thanks to a reasonable amount of grip from those Scorpion Rally STR tyres, the impressive suspension set-up, and as a bonus, the really gentle, soft nature of the engine.

Even though it feels like there’s absolutely no difference between the rider modes outside of the way the dash sets out its information, it was a nice touch to be able to switch ABS off on the trails, and even though I wouldn’t want to tackle any truly hardcore trails on the X-Cape, for most of the stuff we encounter in the UK? It will more than happily oblige.

There’s no denying that the X-Cape 650 is an impressive bit of kit for the money. For a pound under seven grand you get a proper little adventure bike, that isn’t just oozing with some high-spec goodness, but actually delivers a decent ride too. Okay, thanks to the high weight and the easy-going characteristics of that engine it isn’t the most exciting middleweight adventure bike, but if you aren’t looking for thrills, it makes a cracking do-it-all motorcycle at a bargain basement price.