McQueen has been the go to guy for Triumph’s licencing department in recent years, posthumously putting his name to numerous T-shirts and jackets, as well as a limited edition khaki green Bonneville T100 back in 2012. The Scrambler 1200 is the latest in a line of collaborations with the late actor’s estate and his favourite motorcycle brand. 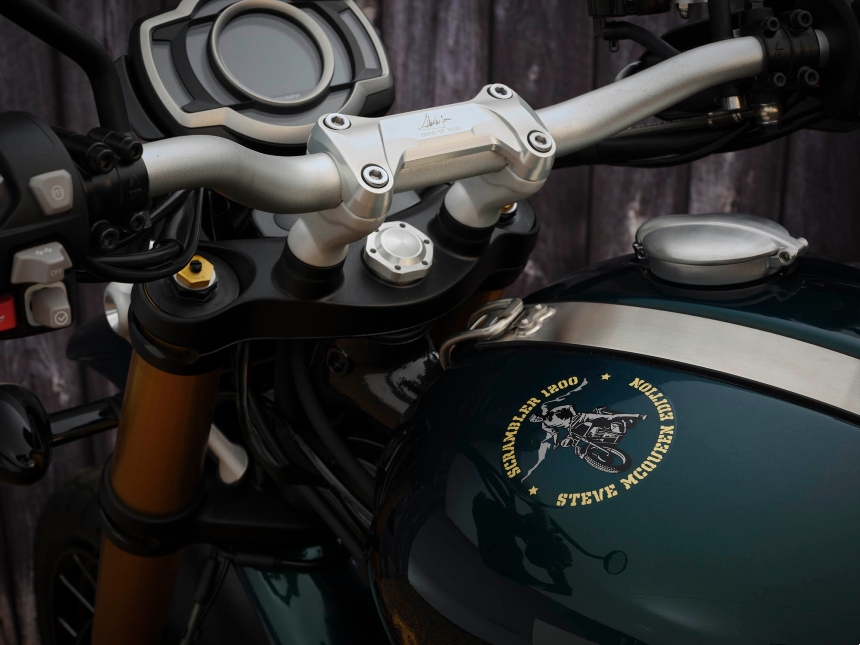 The McQueen edition has also got a whole host of other options from the Triumph accessory brochure thrown at it, including engine bars, clutch and alternator covers and a laser cut aluminium radiator guard. Each bike is individually numbered on a handlebar mounted plaque, with a total production run of 1000, and there’s a McQueen decal – depicting the star astride his Triumph TR6 in the iconic movie The Great Escape – on the tank.

As is usually the case with limited edition Triumphs, the owner also receives a certificate of authenticity – in this case signed by Triumph CEO Nick Bloor, as well as Chad McQueen, Steve’s son.

Triumph has only needed to give its Scrambler 1200 models the lightest of updates to meet the latest Euro5 emissions laws. A new exhaust system is all that has been added to the model, which was first introduced in 2018, and despite the retro looks the Scrambler has built a reputation for its high specification and very competent off-road capability. Power remains at 89bhp, with a healthy 110Nm of torque from the retuned Bonneville T120 motor.

Aside from the McQueen edition, which retails at £13,600, there remains two standard variants of the Scrambler 1200 – the £11,800 XC and the £12,600 XE. The XE has a slightly more off-road focus, with taller suspension, cornering ABS and an additional riding mode tuned for those who want to go off-road.

Italian firm Aprilia built its reputation developing tasty 125s in the 1990s and, for 2021, the legendary RS125 name has been revived as the RS4 and Tuono 125 undergo a major overhaul.

Suzuki’s GSX-S1000 has always been in a safe bet in the 1000cc naked category, offering a solid package at a very reasonable price. And for 2021, Suzuki have refined it even more, while still keeping the price impressively low…

Electric mopeds and scooters: the future of commuting?

The world of electric vehicles (EVs) is still very new in comparison to more traditional vehicles driven by the internal combustion engine, but battery power is becoming more popular than ever and is massively disrupting the motorcycle industry.

Ducati have been hard at work on their Monster for 2021, creating the leanest, meanest and smartest version of the legend yet. So just how much of an improvement is it?