Zero’s FXE may be an A2 compliant electric supermoto, but it packs a whopping 106Nm of torque and weighs just 135kg ready to roll. So, just how good is it?

There’s no denying that electric vehicles are here to stay, and Californian company Zero have been at the forefront in terms of the two-wheeled world – especially in terms of their fairly affordable supermoto model over recent years: the FXS. And now for 2021, they’ve given it a host of updates, to create the FXE.

So what is it, and what’s new? Well, the FXE is a more of an evolution rather than a revolution with a fancy makeover, and a bit more tech to give it a more premium, and indeed modern touch. The new dash for example is a 5” TFT unit, which connects to an app on your smartphone allowing you to change all of the settings on offer, from how much top speed you want, to the amount of torque on tap.

Which can be up to a monumental 106Nm, thanks to the brushless Z-Force 75-5 motor with a 7.2 kWh Li-Ion integrated battery pack, which Zero reckon is good for about 100 miles of city riding. Oh, and when you need to charge it, all it takes a is your standard three pin-plug socket.

As far as the handling goes, Zero have equipped the FXE with Showa suspension, J.Juan brakes and Pirelli Diablo Rosso II tyres, and stuck a price tag of £10,800 on it, ready to roll with all the government grants. So it sounds pretty impressive, but how does it perform not just on UK roads, but living with it too?

In the metal, the silver FXE is a seriously smart and pretty futuristic looking machine. Everything about it oozes class, from those smart new looks to the TFT dash setup. Thanks to long travel suspension, a lot of supermotos can feel both very big and very soft to jump on, but the Zero felt just about the perfect size for my 5’7” frame; although it had the height and stature I’d expect, it wasn’t overpowering and I could easily touch the floor, which was helped by the incredibly low weight and narrow saddle, which combine to make manoeuvring a doddle.

If you haven’t ridden an electric bike before, it really is a strange sensation as turning the key and flicking the stand up just shows the little green light on the dash, and with no engine sound whatsoever, it’s ready to roll.

And my god, does it roll. Engaged in Sport mode to start with, even just a little twist of the throttle the Zero blasts forward, with a devastatingly exciting ferocity. Unlike a petrol counterpart which has a whole host of moving parts to get going, the Zero has none of that, and no clutch, with bucket-loads of torque available not only instantly, but as smooth as a voice note from Barry White.

It’s just so easy and effortless if you want to gently roll along at slow speeds, yet there is so much go that in adverse conditions or even just a cold tyre you need to be aware, as it will spin, or lift the front wheel. It is a proper hoot. 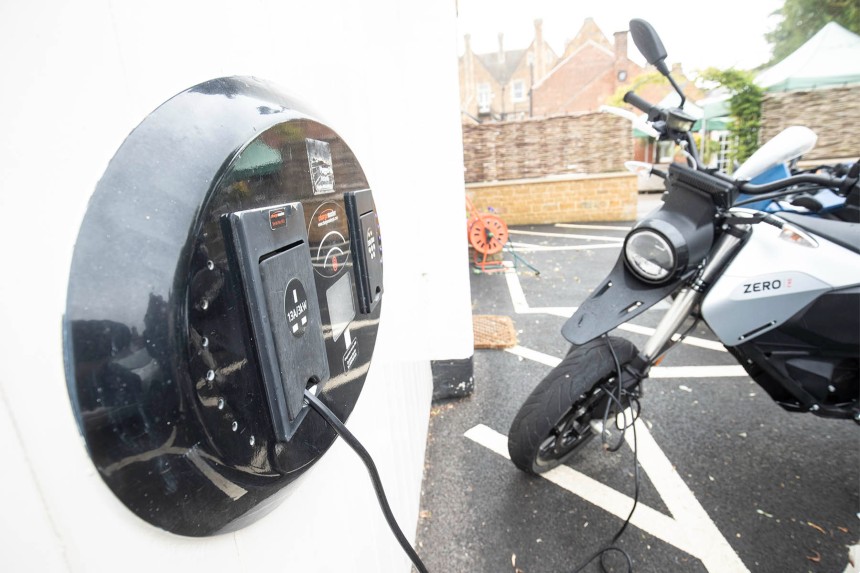 The same goes for the handling. When people think of electric bikes, the misconception is that they’re big and heavy, but it couldn’t be further from the truth where the FXE is concerned. With those Pirelli Diablo Rosso II tyres there’s loads of grip on offer, which is perfectly complemented by the adjustable Showa suspension which offers a plush and responsive ride. The FXE is a really nimble machine at slow speeds, but it also offers a surprising amount of stability too, which is handy if you want to take it out on bigger, wider roads.

But with a bike, riding it is just half the story. That’s why I opted to keep the FXE for more than just a day, and I have to say, the ease and accessibility of the Zero was surprising. I definitely didn’t miss filling and queuing up in a petrol station in all my kit and having a garage (with electricity) made life an absolute doddle.

I just parked up the FXE after a day of riding, plugged it straight into the wall and left it, ready for the next ride. A full charge does take around eight hours, meaning you won’t be covering massive mileage each day, but recharging it really is easy peasy and super cheap. A full recharge costs around a pound.

But don’t get me wrong, the FXE isn’t a perfect machine. Sure, it’s out of its depth on fast A-roads and motorways as it runs out of top end, but that’s to be expected from a supermoto, and one of the biggest issues is range if you want to do long rides.

In order to keep the weight so low and make it such an impressively manoeuvrable machine the battery is relatively small at just 7.2 kWh, which in real world terms means that although 100 miles is manageable it’s only doable when riding very conservatively. This also means that with a quick change of modes into Sport and a bit of fun riding the range will drop considerably, although it is to be expected.

That said, if you lust after an electric motorcycle and want one with longer range and faster charging times then they do exist. Zero’s own SR/F, for example, has twice the range and can be fully recharged in 50 minutes – but it’s a very different animal and costs around twice as much. You pay your money and take your choice. 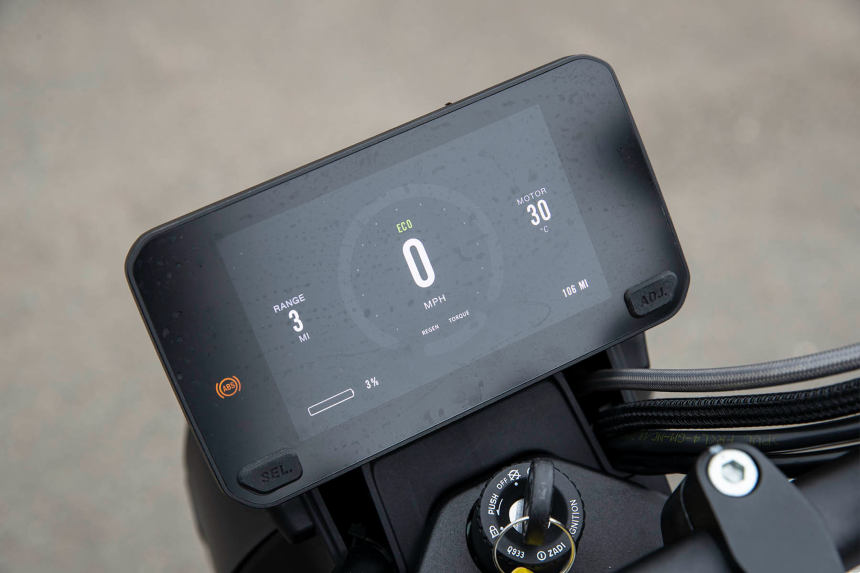 Another thing to note as well is the heat, as on a warm day with the air-cooled motor working hard, the Zero will cap power at the top end to stop it overheating. But I did find that it only did that with some seriously aggressive and erratic riding, so it shouldn’t be a worry most of the time.

The Zero FXE we rode requires an A2 licence, but Zero also offer an A1 compliant, 11kw, version at the same price. The A1 version can be ridden on L plates after completing your CBT and past experience of riding Zero’s 11kw FXS suggests that the performance will be almost identical, making it considerably quicker than a 125cc petrol powered bike.

The 11kw FXE rocks almost all the same specs as the A2 version, retaining the full power model’s 106 torques, 82mph top speed and 44bhp peak power. The only difference is that the ‘learner’ bike has a continuous power rating capped at 11kw (15bhp) compared to the full fat 15kw (21bhp), which should translate to only the tiniest of performance losses in the real world. Both bikes get a five-year, unlimited mileage, warranty on the battery – which will reassure some of the electric sceptics too. 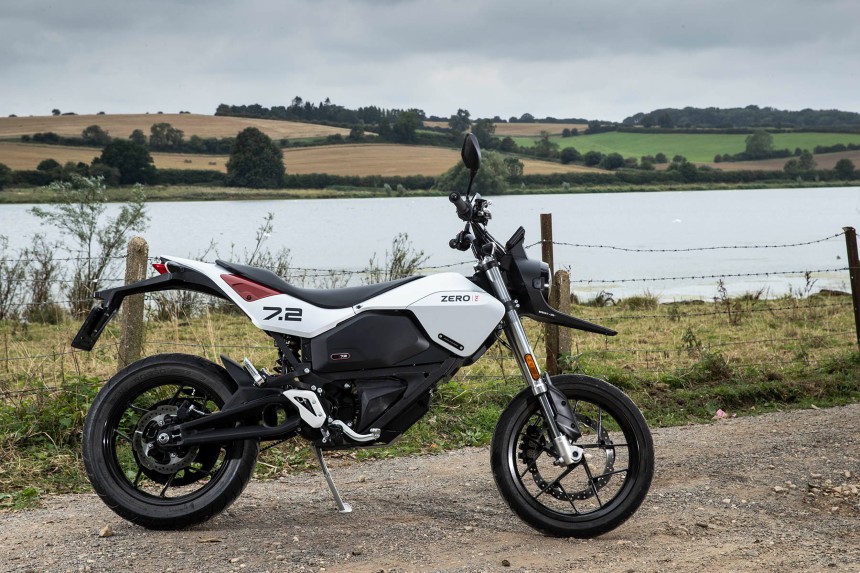 All in all, the Zero FXE is a classy and impressive bit of kit, that would be incredibly well suited for razzing around a town or a city. Not only does it look and feel the part, but it rides incredibly well too, with a plush yet responsive feeling, and as much go up to 40mph that you’ll ever need and a bit more.

It’s not a bike for everyone, but then again Zero don’t claim it to be either. Sure, it’s out of its depth on big, winding roads but literally every supermoto on the planet is too, and to be honest, it’s a seriously worthy adversary for the likes of KTM’s 690 SMC R. It’s not got a ginormous range or a super cheap price tag, but it’s a bloody good machine overall.

If it suits your lifestyle and you’re looking to go down the electric route without forking out a shed load of money, then Zero’s new FXE should be somewhere near the top of your list.