Triumph’s Speed Triple has always been an incredibly popular and capable high-capacity naked, but it hasn’t always had the out and out aggression of some of its rivals. So, for 2021, they’ve stepped it up a notch.

As far as ‘supernakeds’ go, there really is a machine for everyone. At one end of the stick, you’ve got the softer, less powerful and more wallet friendly machines such as the GSX-S1000 from Suzuki and arguably even the base BMW S 1000 R from BMW, while at the other, utterly bonkers other end of the spectrum, there’s the likes of Aprilia’s Tuono V4, KTM’s SuperDuke 1290 R and Ducati’s Streetfighter V4S, which not only produce more power and performance, but also cost a fair chunk more as well. And of course, there are a few machines in the middle ground too, which is where Triumph’s previous Speed Triple range traditionally sat. 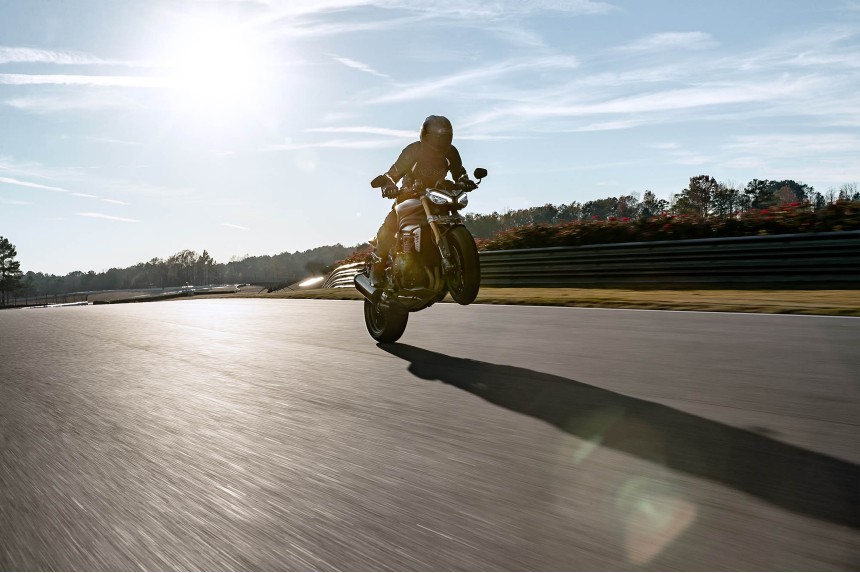 In all honesty, the previous generation felt closer to the softer end of the spectrum, as even though the RS came equipped with saucy components (high level Brembo and Öhlins took care of the braking and handling side of things) it packed a fair amount of weight and a relatively low power figure, at 148bhp. It was a bit like a gentle giant and was fairly cheap too at £13,600, a lot of bike for the money when you consider that some of these litre nakeds are well in excess of twenty grand.

It was always a great, intuitive, bike but it just lacked the out and out excitement some of its rivals offered, which is why Triumph went back to the drawing board and gave us a brand spanking new edition for 2021 – meet the Speed Triple 1200 RS.

And when they say ‘all-new’ they actually mean it, as almost every single component on the new model has been sculpted specifically for this machine. Thanks to a new engine and chassis platform, not only is the new Speed Triple 1200 RS 10kg lighter than the outgoing 1050, at 198kg wet, but it makes a shed load more power and torque too: 125Nm of torque and 177.5bhp to be exact, which will not only give it a load more punch, but also gives the RS a mightily impressive power-to-weight increase of 26%.

The new 1160cc three-cylinder engine is the most powerful and torquiest unit to leave Hinckley yet, and has been developed by the very same brains have developed the Moto2 world championship engines, which is a pretty impressive claim. They’ve then stuck the slightly bigger powerplant into a new chassis that’s 17% lighter than before and gifted it high-spec Öhlins suspension (although not electronically damped), Brembo Stylema monobloc calipers and sticky Metzeler Racetec RR rubber.

Electronically, the Speed Triple 1200 RS has been given all the gadgets and gizmos you’d expect, from cruise control and a quickshifter/autoblipper, to changeable rider modes and rider aids. It even has some additional goodies, such as keyless ignition and Bluetooth connectivity, which is all thrown back to the rider via a shiny new 5” TFT dash. Sitting at £15,100, the new Speed Triple 1200 RS sounds like a mighty recipe for a supernaked, and all at fairly respectable price too. So, how does it perform? 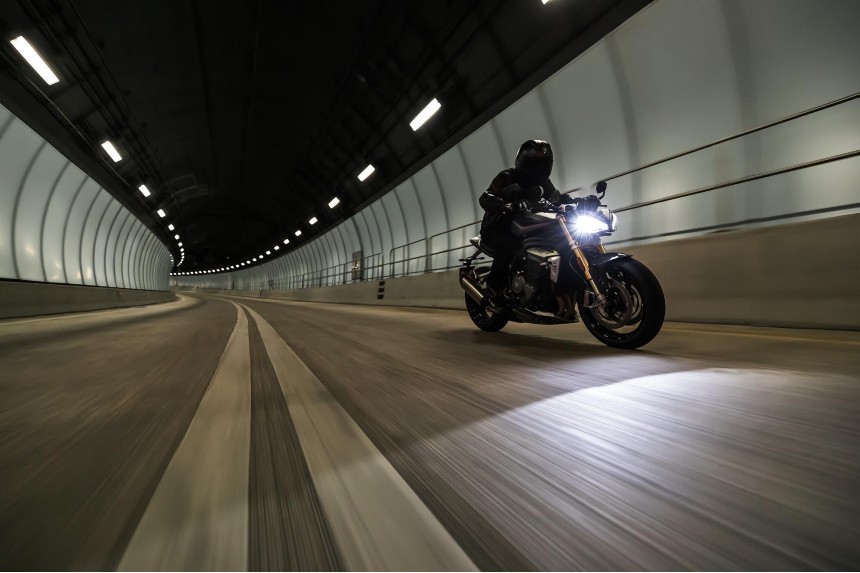 Looking at the aggressively updated Speed Triple in the metal for the first time, it really is love at first sight. Where the previous generation appeared fairly rounded and soft in terms of both performance and aesthetics the new one is anything but and, jumping on, I was surprised at just how roomy and comfortable the RS felt.

Even though it’s more aggressive than the previous generation, the riding position is a pleasant mixture between sport and comfort, and those posh adjustable Brembo levers are a really nice touch – even if I’m still not convinced by the bar end mirrors. Another thing I’m not convinced with is the concept of keyless ignition on a bike.

That said, it’s nice having a system that seems to not only detect the key without a single issue, but which also allows for the fuel tank to be opened without fiddling around in your leathers to hunt down the bulky unit. Still though, I’d prefer a conventional ignition barrel.

Even with the hike in both power and torque figures, the Speed Triple didn’t feel any harsher or more aggressive than before at slow speeds. In fact, that jacked up 1160cc Euro5 compliant motor feels like a gentle giant, rolling peacefully up to a few thousand RPM until the torque kicks in and pulls like a train. It’s not just at the bottom it pulls though, as it now revs 650rpm higher than the previous model, and you can really feel it as the raspy motor fires its way effortlessly through the gearbox.

In all honesty, although it definitely feels like a fast motor due to the way it sails into silly speeds with very little drama or excessive noise, it just makes things almost too easy – you really don’t have to fight it, which I kind of sadistically enjoy in a supernaked. There’s no denying that the power delivery is helped by the sublimely impressive electronics suite that offer an incredible buffer of assistance without any heavy interference at all too, just giving that sweet level of intrusion where things are kept in order, before I even realised the lights were flashing away. If you want a shed-load of power on tap that’s easy to get down, then the Speed really has it dialled in.

It’s not just the engine that’s new though, as Triumph have been incredibly busy on the chassis, geometry and suspension setup, which to my surprise felt incredibly focused and aggressive in terms of its devastating accuracy at diving into corners. I’ve always thought of the Speed Triple as the gentler, confidence inspiring ride when it comes to fire-breathing nakeds, but the ’21 RS instantly felt ready for action; those Brembo Stylemas offer an unbelievable amount of stopping power, while the Öhlins suspension needs to be ridden incredibly hard to get the most out of it.

If I’m honest, I know it would stick the cost up a bit but some electronic adjustability on the forks would’ve made a massive difference to the ride, as although it felt amazing when razzing round on glorious B-roads in the sunshine, it did feel fairly stiff when the road surface was a bit iffy, and especially over bumps.

It was quite a surprise actually, because it felt supremely comfortable after a few days riding and the cruise control is incredibly easy to use, retaining a big part of the Speed’s dynasty of being an absolutely brilliant road bike – but then again, a few days of fettling could make a big difference. It almost feels like it would be best suited for the track. 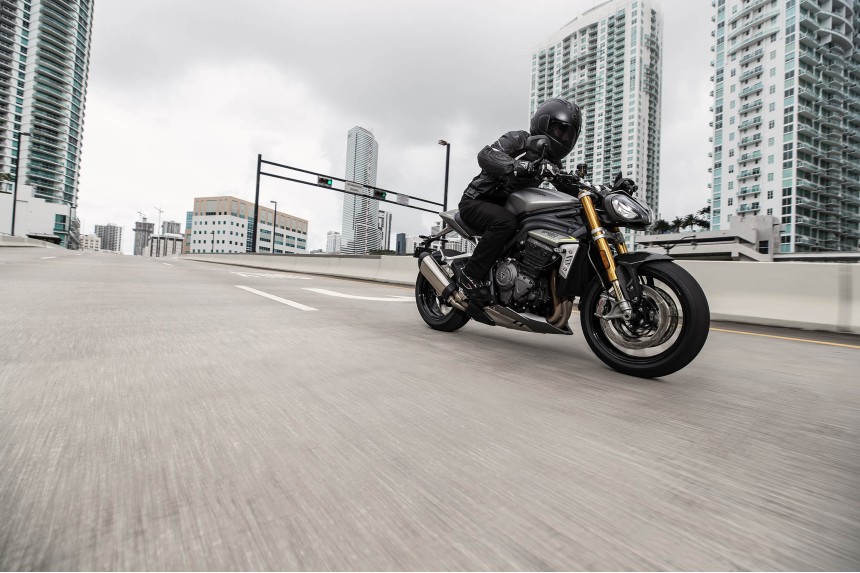 There’s no denying that the new Speed Triple 1200 RS is an incredible machine, in so many respects. It has a gloriously smooth yet punchy engine, an incredible chassis, top-notch components and the electric wizardry to back it all up, at a fair price too.

If you liked the previous generation but want a little more spice, then this thing won’t disappoint, and if you want to take it on track, then it will be utterly incredible. Just keep in mind that it is fairly stiff on the roads, and that the engine doesn’t quite deliver the mind-boggling thrills of some of the more savage supernakeds on the market.