Fears, founded or otherwise, about range, charging times, cost and a lack of character have meant that our roads have hardly been flooded with Energicas, Livewires or Zeros, but one type of bike where none of that really matters is the humble moped.

Mopeds by their very definition are slow. In order to be ridden by 16-year-olds they’re restricted to 28mph, and because of that they’re not really designed to travel long distances. Slow speeds mean that electric mopeds don’t consume energy at anything like the same rate as high performance electric vehicles which, combined with the need to cover only short distances, means that they can run small (read lighter and cheaper) battery packs. Indeed, petrol powered mopeds are already becoming something of a rarity. The Piaggio group, through its Aprilia, Piaggio and Vespa brands, are the only mainstream manufacturers turning out 50s these days, leaving emerging Chinese brands – including Lexmoto and WK Bikes to fill the demand for less expensive models.

In the electric world, two new Chinese manufacturers have emerged at the head of the pack: Super Soco and NIU (which is pronounced ‘new’) and this, the MQi GT SR, is the latter’s latest offering in the moped market.

At first glance, NIU’s naming can seem rather confusing. ‘MQi’ is NIU’s traditionally styled scooter, with this new GT version denoting that it has the larger 14” (as opposed to 12” on the base model), with this less expensive SR being the ‘Standard Range’ model.

Unlike the SR, the ER is not classed as a moped and can only be ridden from the age of 17 thanks to its 45mph top speed. NIU also has two other body styles: the minimalist, underbone style, UQi and the bigger bodied, more retro inspired NQi.

Got it? Good! Those dual batteries on our MQi give a range of around 45 miles which, for most riders, will be more than adequate. Charging those batteries at home will cost around 50p, meaning that these electric scooters are among the cheapest forms of transport out there.

Because it qualifies for a UK government plug in vehicle grant the model we tested costs £2716 after those deductions, however if a range of 20 miles suffices there are NIUs starting at just over £1500.

For new riders, you’ll need to do a day’s training before being let loose on the road on a moped. This is called the compulsory basic training, or CBT for short, and after doing this you can ride unsupervised on a provisional licence as long as you display L plates. 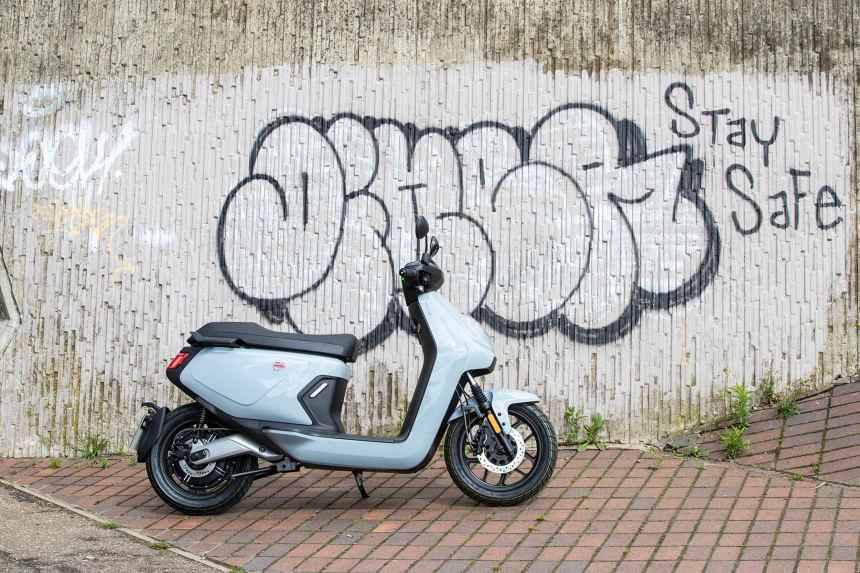 In terms of riding, there’s not an awful lot to say about the MQi. Basically, it is extremely simple to ride. Although you are provided with a key, that only operates the steering lock and seat release. It’s a keyless ignition system, with a car style fob used to switch the vehicle on and set the alarm.

Punch the red button on the fob and the easy to read dashboard lights up. Simultaneously pull in the front brake lever and thumb the green starter button and the scooter silently becomes live, with only the illumination of the ‘Ready’ light on the dash alerting the rider that they can begin their journey.

The NIU is an appliance, and a very good one at that. Its job is to get you from A to B as efficiently and inexpensively as possible, and judged on that it’s hard to fault. It’s as maintenance free as it is possible to be.

It may not stir the soul like a powerful motorcycle, or even as a 125cc scooter can, but as a personal mobility device it is spot on.

Charging up is simple too and takes around four hours if you’ve let it run right down. If you can park up next to a regular domestic wall socket, you can pop the seat up and plug the scoot into the wall via an off-board charger.

If access is a problem, the batteries are removable. They weigh around 11kg each and can be taken into the house or office to be charged up. If you’re racking up lots of miles in a day, perhaps as a delivery rider, it’s even possible to purchase additional batteries and hot swap them when needed.

In the world of mopeds, electric really makes sense. Where bikers have struggled to get their heads around the idea of a motor and battery replacing their petrol engines, it seems ludicrous to use anything else but batteries for these tiny scoots.

Range is more than adequate for the needs of the typical commuter, it’s cheap as chips to run and so, so easy to recharge – not to mention the environmental benefits.

The only real criticism of this particular model is less a slight on the NIU, and more on the restricted nature of a moped. Around congested cities it’s no problem at all, but with a 28mph top speed you can feel exposed on the open roads, even in 40 limits, but that is the law for this type of bike. 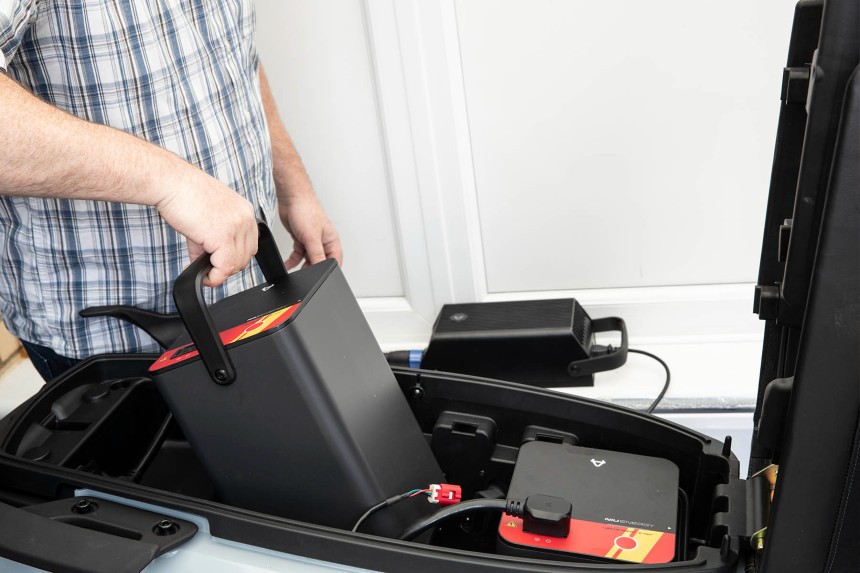 As you’d expect from such a modern concept, there’s some nice tech in the NIU. That funky headlight is LED and very bright, while the hub mounted motor itself comes from German giants Bosch.

The ride feels plush, not always a given on a scooter, thanks to the combination of decent suspension, those 14” wheels and a really generously sized and rather comfortable saddle. The bike also has an alarm as standard and is connected through an app on your phone to the cloud, which acts as a tracker should the scooter be stolen.

Other neat touches include a USB power socket, ideal for charging your phone on the go, while the LCD dash is nicely appointed and has a useful battery meter on it. It’s not hugely important on a 28mph moped, but there’s a cruise control function as well, while the riding modes change the power delivery characteristics.

E-save is a bit of a waste of time, limiting the scoot to 18mph and acting more as a limp home mode should the battery get below 15%.

More relevant are the Dynamic and Sport mode. Sport is a little sharper away from the lights, at the expense of some power consumption, while the Dynamic mode feels like it has more battery regeneration, which slows the scoot down more on a closed throttle and uses this to regenerate energy into the battery and extend range.

On the full power NIUs, Sport mode also unlocks the full 45mph top speed, while Dynamic caps it at 28mph.

If you’re over 17, it would be well worth looking at one of those more powerful NIUs – like the otherwise almost identical ‘ER’ version of the machine we tested.

The 45mph top speed makes it more comfortable in 40 zones, and is still bearable in 50s, creating a more flexible machine, although if your regular journey involves regular and sustained dual carriageway trips, you’re probably going to be looking at a 125cc petrol scooter – for now at least.

But electric mopeds and scooters are most definitely not the future, but the here and now. If they suit your lifestyle, it’s definitely worth considering going electric. They are very easy to ride and may well save you money on your daily commute.