With adventure bikes selling by the bucket load, Harley-Davidson is the latest brand who’ve decided to get in on the action. So just how good is their new Pan America 1250, and have they hit gold on their first attempt in the segment?

Although Harley-Davidson really have made their name in the world of traditionally styled cruisers and customs, they’ve not been shy to branch out into other sectors with some fairly interesting and extreme machinery over the years, most notably the electric Livewire. But even so, it’s fair to say that when they unveiled their Pan America, it still came as a bit of a shock – I mean a Harley that can tackle an adventure? Now that sounds interesting.

And it looks interesting too, both on the spec sheet and in the metal. Powered by their latest 1252cc V-twin engine, the Revolution Max motor may appear to be a big, bolshy Harley engine, but it has been designed to work specifically in a mainstream adventure bike.

They’ve done this by introducing lots of new tech, from the 30 degree crankpins that are there to reduce the engine’s vibration to the vertically stacked gearbox, which keeps that fairly compact V-twin as short as possible. With everything added up the Pan America pumps out an impressive 150bhp and 94 ft/lb torque, which more than keeps it in line with its rivals, the main one of which is BMW’s uber-selling R 1250 GS.

It’s not just about the engine though, as the steel trellis frame has been crafted for both an intuitive riding experience and for comfort, to tackle long hauls when needed. As with most big-capacity adventure bikes these days, it comes with nearly all of the electronic wizardry under the sun, including an IMU that powers rider modes, cruise control, hill hold, traction control and ABS, all controlled through a new TFT dash – although it does miss out on a quickshifter.

It’s also worth noting that we tested the standard model (no semi-active suspension and a few other bits) weighing in at 245kg and costing £14,000. So, is it good enough to play with the GS, not to mention other strong adventure bike contenders, such as KTM’s 1290 Super Adventure range, the Honda Africa Twin or Ducati’s Multistrada? 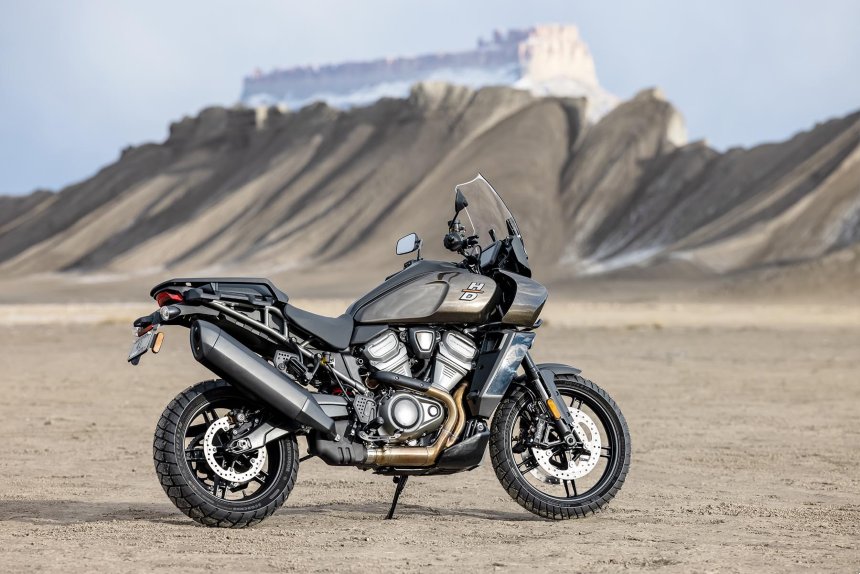 Beauty or the beast?

It’s fair to say that there’s been a lot of talk around the Pan America’s looks. I don’t think I’m being controversial by saying that it isn’t my cup of tea (I’d take big, aggressive sportsbikes over a cruiser any day) but I was surprised at how much better the new Pan America looks in real life, compared to in the publicity pictures we saw when it was launched.

And when I say better, I’m not saying that I love it, but it’s nice and refreshing to see something a little different to the adventure bike norm, as the bulky headlight setup and the long tank is incredibly Harley-esque, bringing something different to a genre of bike where all the machines look fairly similar.

Although the finish isn’t amazing, with some exposed hoses and other bits like the ugly steering lock location (it’s a big, exposed keyhole), I was pleasantly surprised when I jumped on the Harley. With those high ‘bars it felt incredibly roomy and the cockpit is good too, thanks to that fairly hefty yet still tidy new dash.

I’m only 5’7”, and even though the Harley felt big in terms of reach, I was surprised that the pegs felt quite high too; it’s a riding position that feels slightly different and less relaxed than it’s rivals, although I quite liked it, if I’m honest.

I could get both feet on the floor with tiptoes too, but if you go for the fancier ‘Special’ that comes with electronically adjusted Showa suspension, you can actually get an Adaptive Ride Height System, which lowers the seat height when you come to a stop.

I really wasn’t sure what to expect from that 1252cc lump, but from the very first time it spun up, I was absolutely sold. The team at Harley have actually done an incredible job with the V-twin; it’s got loads of attitude, with a deep growl to ooze the sort of character that makes Harley-Davidsons so popular, but it’s composed enough to still be well balanced and smooth – even if the weight does feel quite high up, due to the configuration.

The throttle response was really friendly too and it has so much grunt and bottom end, making it a real pleasure to open up. I would’ve liked the gear shifts to have been a bit smoother but being a little agricultural on the gearbox almost suits the Pan America’s style, in a strange way. Mind you, a quickshifter would’ve made a massive difference.

The chassis and standard suspension were fairly impressive too. It definitely isn’t the most responsive nor sporty machine in the segment, but it felt incredibly planted and surprisingly composed, with a real spring in its step for cornering that I didn’t quite expect.

I felt that even though the brakes come equipped with Brembo logos they aren’t the hardest hitting stoppers on the planet, and it could do with a bit of an upgrade.

Although it’s happy cruising at motorway speeds, it isn’t the most comfortable adventure bike in the world either, as it did have a fairly hard seat, which when combined with those high ‘pegs doesn’t create the gentlest of atmospheres on the body, and that’s without mentioning just how hot it gets too, right on the inside of where your thighs sit.

Ergonomics are a personal thing though, so if the Pan America is on the shortlist for your next bike, take one for a test ride and make up your own mind.

Saying that, I did take it off-road down some green lanes, and with a quick switch of the engine maps it actually felt sublime on the dirty stuff. I didn’t touch the suspension at all but being fairly soft it soaks up holes and bumps with ease, and in off-road mode the engine feels suitably softened for a fun yet still exciting ride, which is handy as although it does feel a bit weighty and lethargic at slow speeds, it was surprisingly capable when it got going. 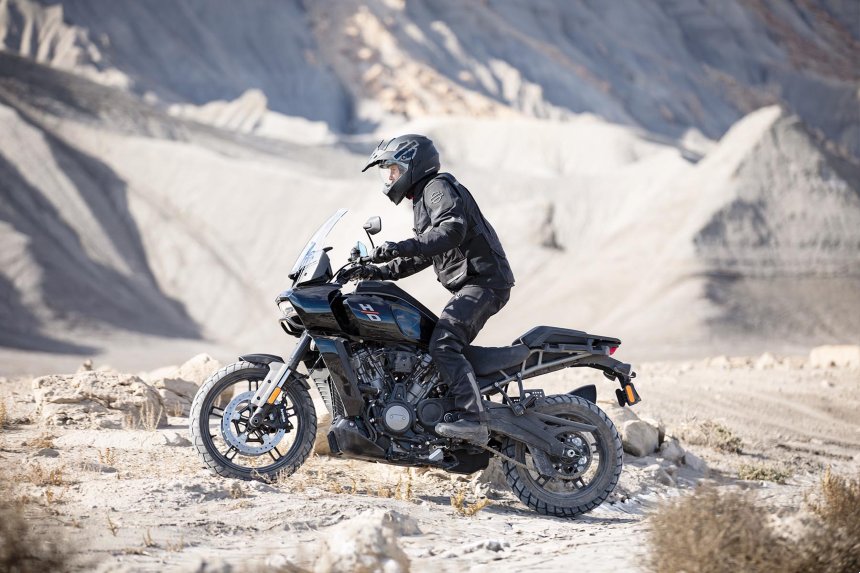 I have to say, the Pan America is the best Harley I’ve ever ridden. In a sector that’s filled with incredible machines that have undergone years of refinement, the Pan America just brings a different angle into the equation.

It has a lovely mixture of roughness and refinement to give it enough character, while the ride both on and off-road is surprisingly good.

Sure, its appearance is very marmite, but it breaks the mould of adventure machines. I wasn’t expecting to be a fan, but they’ve done a cracking job here.