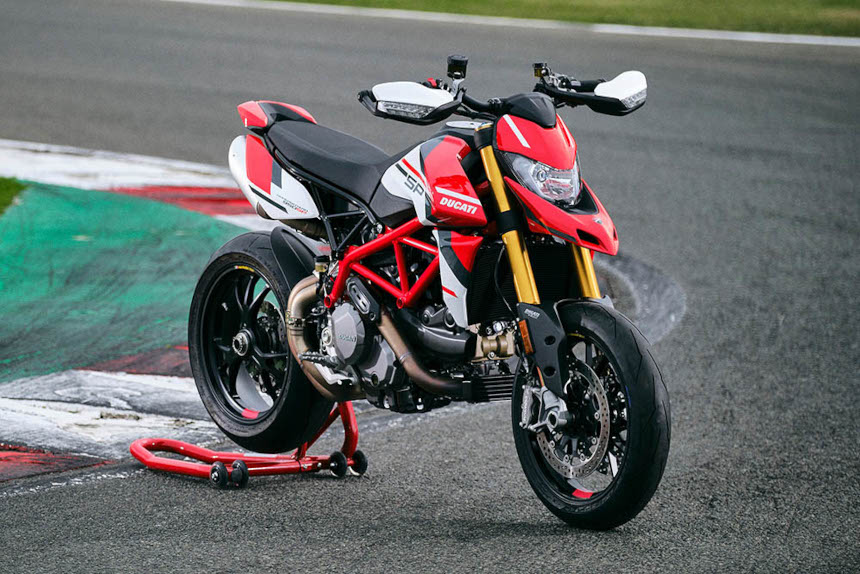 When you look at the Ducati range, the Hypermotard probably isn’t the bike you’d go to for a day out on track, especially as we did recently on the long, Grand Prix circuit at Silverstone. But why not? It might be something of a niche model, but the Hypermotard SP is super fun and in many ways the antithesis to the arm-ripping superbikes you’ll find on the average track day.

But it’s certainly not your average, budget, supermoto style machine. The Hypermotard SP is a properly trick bit of kit. Unlike the standard model, the SP comes equipped with Öhlins suspension, forged Marchesini wheels, a quickshifter and autoblipper, a snazzy colour scheme, a different seat and a few little carbon goodies too. Everything else remains the same as the standard Hyper, including the 937cc engine that pumps out 114bhp, full electronics package and that glorious, almost MX-esque riding position, which just oozes fun at every opportunity. But at £15,395, there’s no denying that it’s a lot of cash…

But then again, as you would expect from something bearing the Ducati badge, it looks like a seriously premium bit of kit. It’s tall, aggressive stance makes it really stand out no matter what other bikes are surrounding it, and the special ‘SP’ colour scheme looks incredible. I think it’s the nicest paint job on any of Ducati’s current range.

I have to say though, that the Hyper is a big machine. Even though it is pretty narrow, the seat height is a whopping 890mm. It feels massive, and thanks to that stiffer, more purposeful Öhlins suspension setup, it doesn’t even sag when you jump on. It’s definitely a tiptoe machine for all but the tallest of riders. 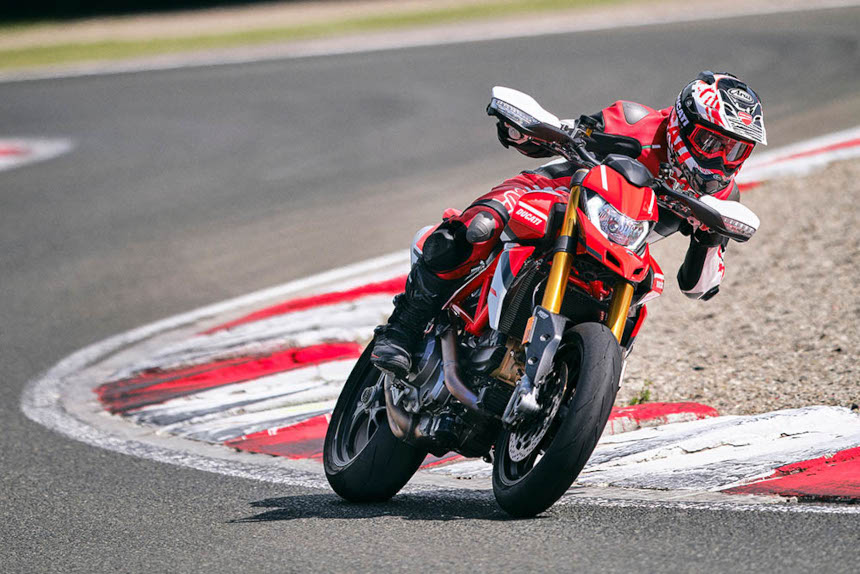 Mind you, that’s fine by me on a bike like this; it’s not made for comfort, it’s made to be a one-stop smile machine. Firing the engine into life, I couldn’t help but get a tad excited. That Desmo engine emits a stunning sound, and although I almost needed a step ladder to jump on the thing, it felt nice and roomy onboard, albeit not the most comfortable machine I’ve ever sampled.

Getting going down pitlane, the Hypermotard felt incredibly soft to start with; the clutch was gentle and the throttle response was super smooth, and with a large range of movement from the handlebars, slow-speed manoeuvring was an absolute doddle too. Even if I did have to hang off the side of it at a standstill.

Mind you, all was forgotten when we got going. The Grand Prix circuit at Silverstone is an absolute monster with long straights that swallow up just about any bike that isn’t 1000cc, and although it didn’t feel slow the Hyper did just feel a touch out of its depth.

Saying that, the engine felt incredibly user friendly, and with a bucket load of torque on offer you can hit corners in higher gears and carry an incredible amount of corner speed. It had me smiling from ear to ear as I pushed harder and harder - and that was only possible because the Hyper actually handled way better than I anticipated.

Although it’s got that Supermoto-esque stance, it actually felt fairly stable, and those Öhlins components are sprung impressively well, offering up a huge amount of feedback without too much in terms of pitch. Matched with some powerful Brembo brakes, sticky Pirelli Supercorsas and an impressive array of electronics to look after you, the Hypermotard SP really did deliver far more than I expected. Although I’ve got to say, a little screen would’ve been nice doing down those long straights!

Let’s get this straight – the Hypermotard is not a do it all machine. I wouldn’t want to go touring on this thing, or even for a really long ride, but for a bit of fun? Well, it’s bloody good. Although it does get a bit lost in terms of power at the monstrous GP circuit at Silverstone, the actual handling and format of the Hyper was incredibly impressive.

At somewhere tighter and twistier, it would be ace, and as a road bike to use as a bit of a play thing, maybe even with an occasional track jaunt? Well, it’s a seriously fun bit of kit.