BMW’s new-for-2021 S 1000 R may have the same power and torque figures as the previous generation, but pretty much everything else has changed – from the engine and chassis, to the electronics and ergonomics. But have the Bavarians done enough to keep up in a class full of 200 horsepower monsters?

When BMW released their new S 1000 R at the back end of last year, there were a lot of disappointed keyboard warriors all over the world. Although it had finally been gifted the sublime engine and chassis platform from the latest S 1000 RR superbike, the naked R retained the exact same power and torque figures as before which just seemed a little odd, and low compared to the competition.

Yep, in a world of Ducati Streetfighter V4s, KTM 1290 SuperDuke Rs and Aprilia Tuonos (to name but a few), BMW (much like Suzuki with their latest GSX-S1000) decided to swim against the tide of the supernaked power struggle and invest their time and energy into making their latest flagship roadster lighter (by a whopping 7kgs in total) and smarter, rather than more powerful – although BMW claim that this makes the new S 1000 R better at everything, from commuting, to touring, to trackdays.

So how have they done it? Although it might not seem it at first glance, those engineers in Bavaria have been incredibly busy. Sure, 165 horsepower and 114Nm of torque is the same as before, but the new S 1000 R does indeed come with the very same power unit lifted from the S1000RR, albeit with a few tweaks.

For starters, BMW decided to ditch the shift cam technology as they felt it was unnecessary. They have a point, as because it doesn’t have the peak power its faired sibling, the new R is tuned so it has more torque than the RR under 10,000rpm, which BMW says makes the S 1000 R accelerate faster than the previous generation, and according to them, it’s sharper away than its rivals too.

It’s not just about an exciting ride though, as fourth, fifth and sixth gears are longer too, making cruising that little bit more comfortable and improving fuel consumption on those long hauls to boot. 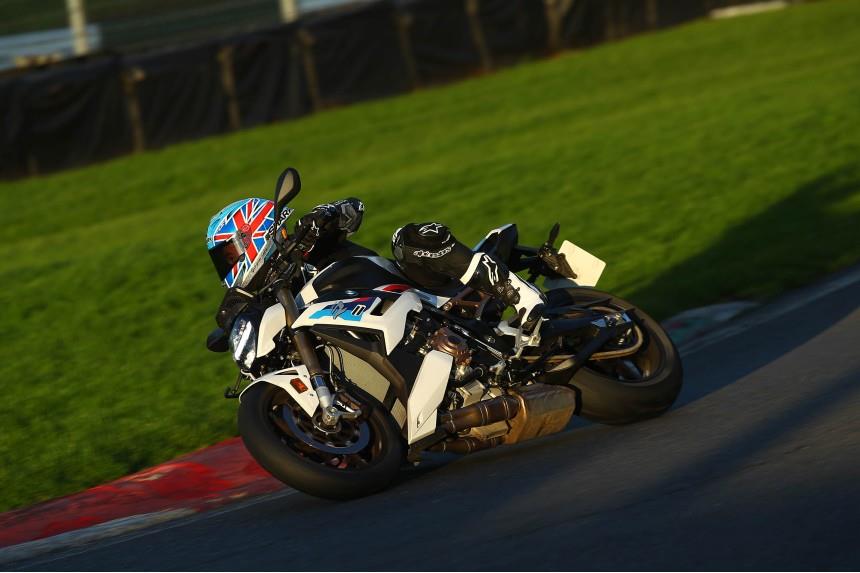 BMW have stuck that motor into their latest gen’ RR chassis, which is smaller, narrower and lighter than before, saving 5kgs on its own. They’ve also used the same GP-inspired under-braced swingarm for a better feel and more feedback when riding fast, but they haven’t neglected the road manners – BMW have also given the latest S 1000 R a bigger steering range and a higher, more padded seat for added comfort, although due to the narrower frame it doesn’t make reaching the floor any harder.

As you can imagine, the S 1000 R Sport comes with all the neat electronic bells and whistles imaginable, from a six-axis IMU powering a host of rider aids, to a 6.5” TFT dash, and electronic suspension, cruise control, heated grips, a USB charging socket… the only that’s missing is the kitchen sink.

It costs £14,000, but if that’s a bit excessive in terms of spec there’s also the standard model which comes fairly bare at £12,055, while the M Package, costs £17,325 and includes everything from a snazzy colour scheme, to magnesium lightweight wheels. Still no kitchen sink though! The point is, much like all high end BMWs, you can spec a S 1000 R pretty much how you (or your bank manager) want it. But how does it perform in the real world?

Sure, BMW has never been the most aggressive in terms of their styling, but it’s fair to say that the S 1000 R really does look smart in the flesh. That’s particularly true in that very recognisable BMW red, white and blue colour scheme, although I would’ve liked for that front headlight to a bit sharper and more distinctive if I could change anything, especially as it’s so technologically advanced.

Jumping on, even though so much is new it really does feel familiar and related to the old model, with a comfortable seat and a sporty, yet not too aggressive riding position. Although the seat is slightly higher than before it’s still a fairly low reach to the ground (you can opt for a higher seat as standard if you wish) and the pegs felt in a really nice location, with everything just where I expected it.

Having the 6.5” TFT dash is a smart addition and although it’s a little confusing to get used to – after a bit of usage, it really is an intuitive system, with so much personalisation and so many options. 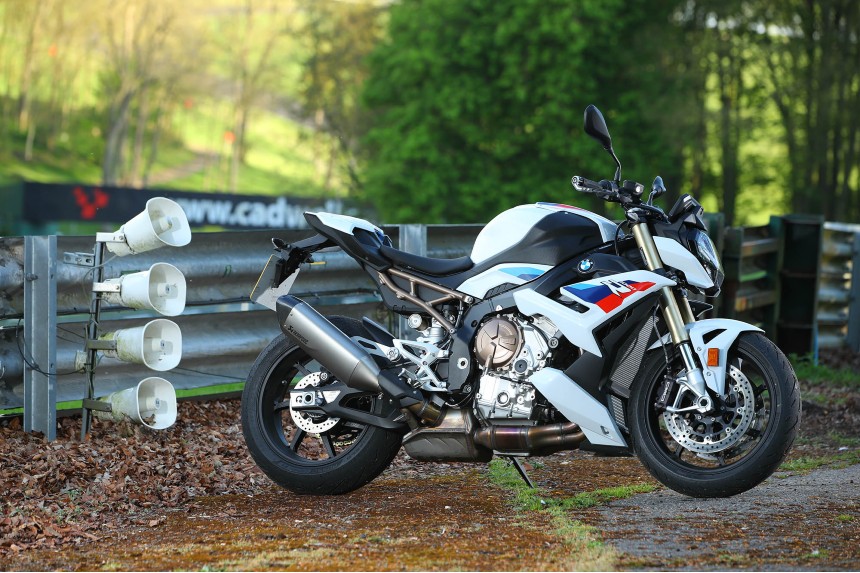 Considering it’s a supernaked, the first thing that struck me about the S 1000 R was just how soft, easy and composed it is at slow speed. When BMW said they wanted to improve its urban behaviour they really weren’t lying, as the power delivery and throttle response is so soft, it almost made me feel like I was sitting on top of an oversized G310R.

Thanks to that softer clutch and better turning circle, it’s effortless to manoeuvre around and ride at the very depths of the rev range, and really is a doddle to roll around at walking pace.

But BMW clearly didn’t build a 160bhp naked for bumbling around in single figures, and when the taps are opened is when that latest-gen motor really does come into its own. It pumps out its power so easily and with impressive urgency, piling all the way to 12,000rpm with an addictive buzz from the exhaust (and a little burble on the overrun, if you’re into that sort of thing).

In fact, it feels similarly smooth to the last generation but with that little extra in terms of go and an impressive shove from the bottom of the rev range thanks to that serious amount of that torque on offer.

It’s so smooth that it almost makes accelerating too easy, effortlessly punching forward with every twist of the wrist. In all honesty, if it’s just out and out excitement you’re after, it doesn’t have the same in your face aggressiveness of some of the competition, especially in terms of a feisty throttle pick-up, but that’s not always a bad thing.

Especially as, thanks to those longer gears at the top, it’s more than happy to cruise along and sit at speed, so if you want a supernaked for serious mileage and every day riding, this would be a great tool for the job. 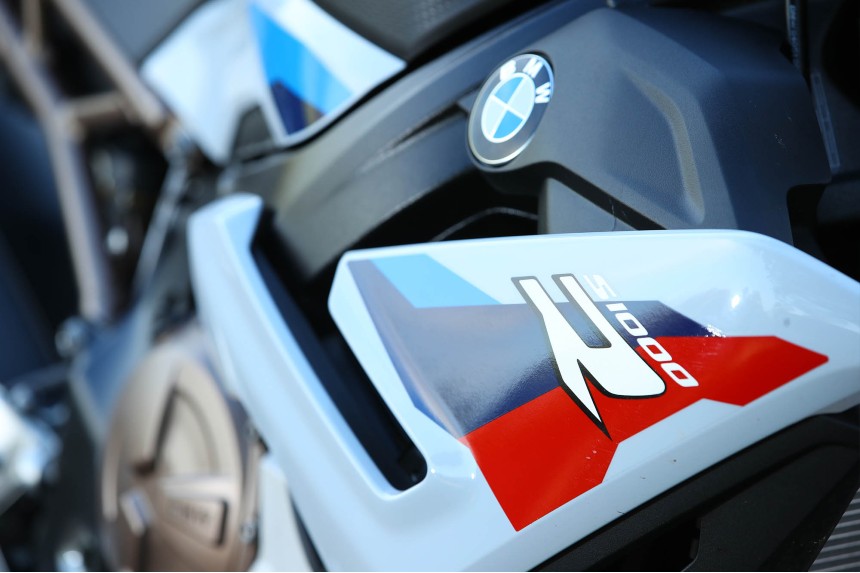 Don’t get me wrong, it’s by no means boring, but it just delivers its excitement in a different way by being so easy to ride quickly. This is not just down to the engine though, as the big loss in weight combined with that chassis and swingarm setup work immensely to provide one of, if not the most agile machines in the sector.

I know it’s a bold claim, but the S 1000 R really does feel like a lower capacity machine in the way it flicks from side to side, and when I managed to sample the M package with the lightweight wheels (among other bits), it was even better. It isn’t the most refined machine when it comes to the bottom stroke of the electronic suspension soaking up bumps, yet even so the ease of riding is the biggest tool in the S 1000 R’s armoury.

It makes fast riding an absolute doddle, especially on smooth roads in the stiffer suspension mode.

We were even lucky enough to spin some laps at Cadwell Park, and that exact same feeling transferred to the track. The faired S 1000 RR, with which it shares so much of its components, has to be one of the easiest bikes in the world to ride fast, and its naked brother is absolutely no different in that sense.

The engine pulls with incredibly urgency without being overwhelming, helped by those sublime rider aids which offer a really gentle of intrusion, almost working incognito. The only niggle I’d have when pushing on what that the suspension actually comes up a little short in terms of dive when hitting the brakes hard, so I would’ve liked the ability to change the set-up a bit more in depth and have a proper play around.

Oh, and on the subject of changing things I would definitely ditch the keyless ignition on a bike like this, as it’s a real annoyance when wearing one piece leathers, and fairly pointless as you have to use the key to open up the fuel tank too.

But then again, that is a very small price to pay considering how good the whole package is. Considering it’s pretty much a whole new bike, it actually feels more like evolution rather than revolution when compared with the previous S 1000 R. It’s just slightly better than the previous generation in every way.

For those of you who are fans of something with a bit more razzmatazz and if you’re reading this and wondering where the new S 1000 R sits in terms of the sector, I’d summarise it by saying that it’s the gentlemen’s super naked.

It’s well behaved at low speeds and when cruising, yet is insanely composed and incredibly easy to ride fast. What you make up in lap times though, it does lose actually lose touch of zest in terms of pure riding insanity compared to what some of the more extreme machines in the segment offer.

Sure, it won’t blow your face off completely every time you crack a throttle, but it will guarantee a massive smile every time you jump on. It’s BMW doing what they do best.