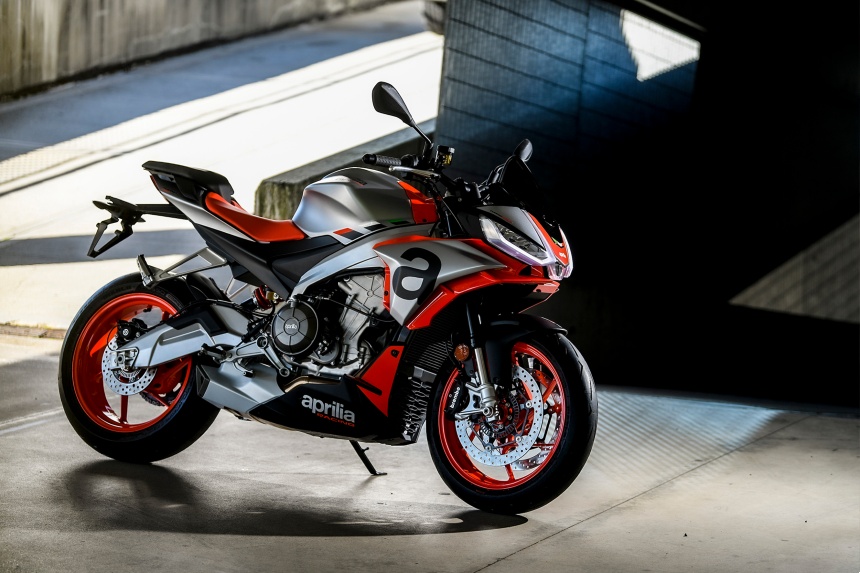 It’s usually easy to categorise bikes based on their performance and price, but the Tuono 660 is a bit of an oddity. It’s a 660cc naked twin, so at first glance it looks set to compete in the naked middleweight market alongside the likes of Triumph’s new Trident, the ever popular Yamaha MT-07, Suzuki’s bargain SV650 and the versatile Kawasaki Z650.

Yet a quick glimpse of the impressive spec sheet, not to mention the asking price of £9,700, suggests otherwise. The Tuono is well equipped but comes in at thousands of pounds more than those machines. So why is that? Well, the Tuono 660 is based heavily on Aprilia’s impressive, faired RS 660, using the same engine, chassis and components, which means that it really is no normal ‘budget’ middleweight…

For starters, the engine may only be the relatively small 660cc twin from the RS 660, but Aprilia have gone above and beyond to make it as mighty as possible.

Not only has it been developed from the front bank of their 1100cc V4 superbike engine, with the same cylinder head, combustion chambers, ducts, cylinders and pistons, but Aprilia have done their utmost to make it feel as much like a V4 as is possible from a parallel twin – everything from how the crank has been crafted, to the actual firing order, has been done in order create a saucier soundtrack and, say Aprilia, a better riding experience.

It’s also been gifted lower gearing than the faired machine for a bit of a peakier throttle response, although it has lost five horsepower at the top end, in order to make it eligible to be ridden on an A2 licence (after fitting a restrictor kit). 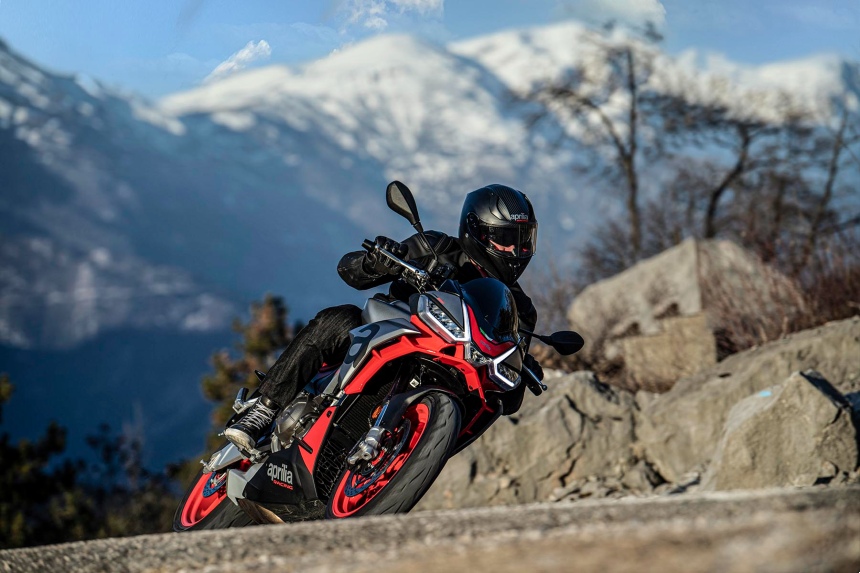 Aprilia have also gifted the Tuono 660 whopping great Brembo brakes and adjustable Kayaba suspension at both the front and rear. It’s the same stuff that’s equipped on the RS, although it gets its very own revised setup with includes higher, flatter bars, dedicated yokes and a slightly different fork offset, in order to create the sort of agility that we’d come to expect from a naked machine.

Aprilia have also gone to town electronically, gifting the Tuono nearly all of the electronic goodies from the RS 660. We say nearly, because for some reason they didn’t bother sticking on their quickshifter and autoblipper, nor the cornering ABS, but it does come with the new Magneti Marelli ECU. That powers a full raft of aids: traction control, wheelie control, cruise control and ABS, and these are all fed through a six-axis IMU.

It also comes equipped with changeable rider modes, engine map and engine brake strategies, which can all be seen on the chunky and smart looking TFT dash. This all means that the Aprilia is pitched against bigger engined bikes likes of the 890 Duke, Z900 and MT-09. But is it worthy and, more importantly, can a naked twin be worth nearly ten grand? 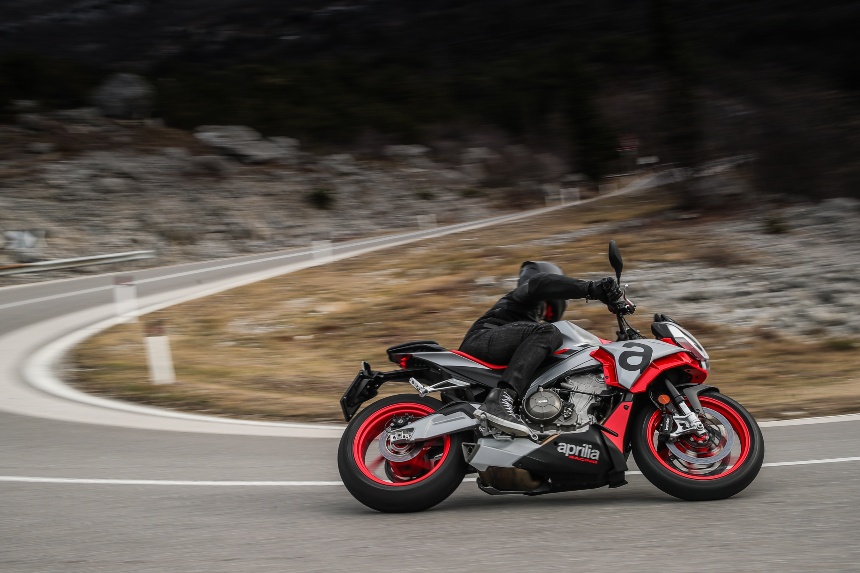 The answer is a surprising yes. Not only does the Tuono 660 have an edgy, aggressive look, but its big-bike stature makes it appear more like its higher-capacity brother, the Tuono V4, than a toy-like budget middleweight. It’s got a real quality finish up close too, with everything from mini winglets on the fairings, to a nicely lit and intuitive TFT dash.

The riding position feels instantly perfect for a naked bike for my 5’7” frame, as the handlebar and footpeg position combines just the right level of comfortable and sporty, with more than enough space to fit in if you’re built bigger. The cockpit, in general, is a lovely place to be, and for a naked bike there’s a fair bit of wind protection from the little screen, which combined with the cruise control, makes the 660 a surprisingly effective mile muncher.

In fact, the 660 feels like a serious bit of kit; the motor is fairly wide and although it’s not weighty, it feels every bit a proper machine and not just a middleweight naked toy. That very same feeling continues with the engine – even though it’s a 660cc twin, it’s got a roar that’s reminiscent of the V4 engine with which it shares so many of its parts, and a hefty dose of DNA too.

Now normally I hate all the press release guff and advertising puff that talks about such stuff, but with the Tuono 660 it is spot on, as although it does sound aggressive, in the softer, ‘Commute’ riding mode, the engine is incredibly smooth and has a mightily impressive throttle response. Switching into the more responsive ‘Dynamic’ mode, the delivery felt every bit as smooth, but with some additional urgency. And and by altering the gearing ever so slightly, the Tuono 660 feels like it packs more than the 95 horses.

It’s an exciting ride, singing all the way to the 11,500rpm redline. Here is where I found one of my biggest issues with the Tuono 660 however, as on arrival to the redline I really would expect a quickshifter and autoblipper to make the gearshifts just effortlessly smoother – especially when the asking price isn’t far short of the £10k mark and it’s been gifted nearly every electronic gadget under the sun.

Don’t get me wrong, the Tuono’s electronics are amazing, easily switchable and are just the right level when it comes to intrusion, but on a bike that makes this amount of power, I’d actually swap the intelligent six-axis IMU for a ‘shifter any day of the week - but that’s just personal preference.

Saying that though, the way Aprilia have dialled in the chassis, suspension and geometry will soon (almost) make you forget about everything else, as they really have done a cracking job.

The faired RS 660 was an incredible package in the corners, but by gifting the Tuono those higher bars, a slightly different offset angle and a tweaked suspension set-up, its agility has got even better, as the Tuono flicks effortlessly from side to side yet still glides into corners with incredible precision.

Even though it feels light and easy to muscle around and absorbs bumpy roads nicely, it never feels too soft, which is handy as those hefty Brembo brakes offer up the sort of stopping power that some machines double this price can only aspire to. 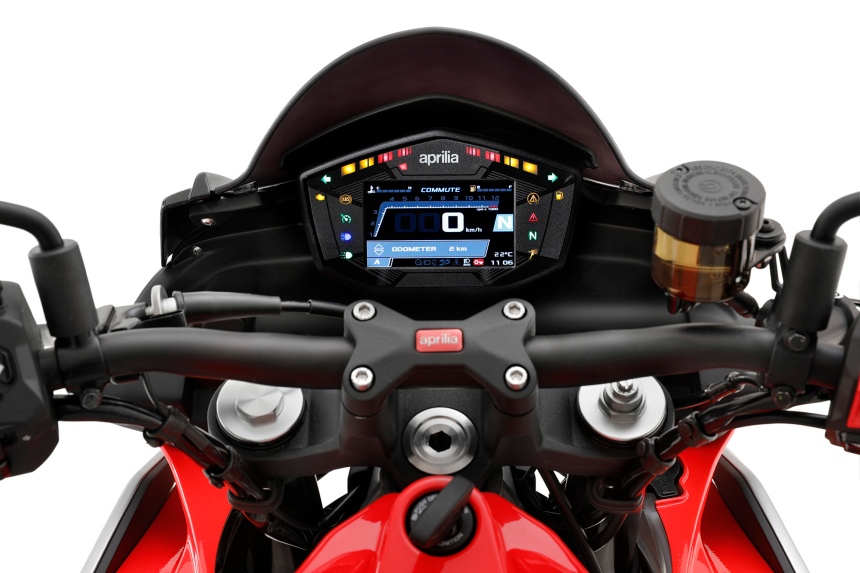 While riding, the TFT dash is incredibly useful and is easy to navigate, although another small niggle I found with the Tuono was the positioning of the full beam button. I found that every time I went for the clutch (which is a lot, without a quickshifter) I kept knocking it on, although it isn’t the end of the world.

After a full day in the saddle I had no aches and pains whatsoever. It really is every bit a proper naked in so many ways, as it feels comfortable and sporty without being excessively aggressive in terms of the riding position, and it offers up such an impressive riding experience that you really do forget that it’s just a 660cc. 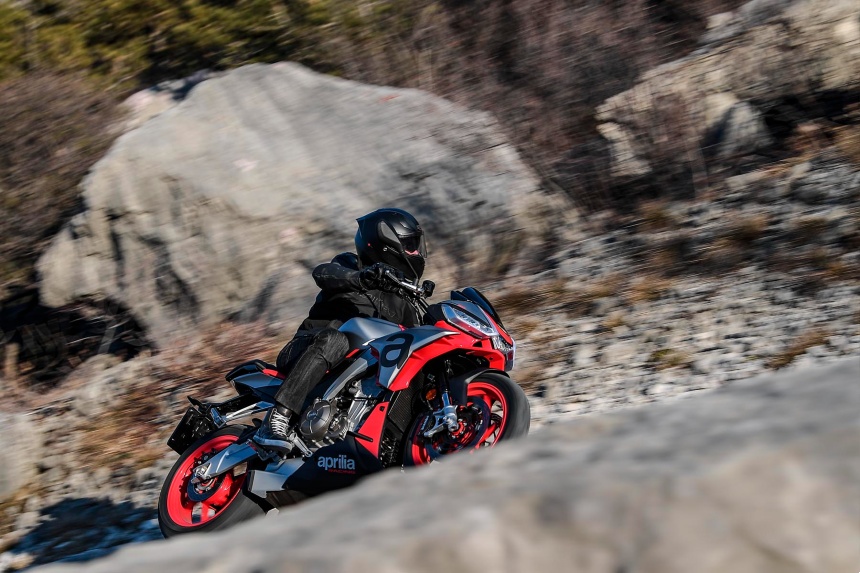 As far as riding experience goes, the Tuono 660 is an incredible package. At its heart is a truly amazing engine that could fool the best of us into thinking that they were sitting on a miniature V4, rather than a twin cylinder unit that doesn’t even make three figures in terms of horsepower.

Aprilia have then stuck that engine into an incredible chassis, which is complemented by a superb suspension set-up, and have thrown some quality components its way, like the Brembo brakes and a (nearly) full electronics suite. It really does feel like a special machine, but then again, it does come in at a whopping £9,700.

But is it the best naked middleweight capacity machine on the market? I’d say yes, but I’d also caveat that by saying that it isn’t in the same league, as the other machines in that category, which are all built to a lower price. This is more suitable to go up against the likes of KTM’s 890 Duke, Kawasaki’s Z900 and Yamaha’s MT-09 as far price is concerned, and if you don’t mind sacrificing a bit of their performance in return for some Italian zest, then this could be the bike for you.