A2 licence sportsbikes have risen in popularity in recent years, and KTM’s latest RC390 promises to be one of the best yet…

We may have lost our appetite for sportsbikes in the UK, with today’s sales a fraction of what they once were, but when it comes to street-cred, anything boasting big horsepower and speed still commands a high rank among British bikers.

On the contrary bikes with modest performance still have little clout, but  KTM’s new RC390 challenges that short-sighted thinking. Though the 373cc single cylinder machine only makes 44bhp, thanks to its light weight and quality chassis components, which make it all the more usable, the sporty RC can provide masses of fun. Not to mention a surprising turn of speed on both road and track.

We rode the latest KTM at its press launch along the challenging routes above Maranello in Italy, and it performed more than capably, quickly silencing anyone doubting it could cut the mustard. To be fair, a couple of years ago, before I rode a 390, I myself never thought I’d be won over by such a weedy-sounding machine. But just as I was in Italy, I soon began smiling broadly, wholly entertained and impressed by this little gem of a bike.

KTM, who let’s face it, have a bit of experience making some pretty decent motorcycles, ranging from small capacity two-stroke enduro models to race-winning MotoGP bikes, have put some serious time into getting the design of the latest RC390 just right. The chief aim of the Austrian company was to make the new bike more rideable. It’s achieved this by fine tuning the existing machine, more than giving it a more radical overhaul. The result is very impressive.

Of course, the RC390 is not a new concept. It’s a model which has been the the Austrian manufacturer’s range for a few years now and it even has racing heritage of its own, being homologated of Supersport 300 racing and starring in its own one-make series a few years back.

Key changes for this iteration include a 1.2kg lighter frame, designed with more flex to improve rider feel and feedback. Just as influential is the 3.4kg weight saving from the wheels. This results in lighter steering, less unsprung and rotational mass to improve suspension and braking. The suspension itself has been improved with extra adjustment and finer control. That’s also the case with the class-leading electronics package which provides the safety net of cornering ABS and traction control. Adjusting the settings is quick and easy via the bar-mounted switchgear, and can be monitored on the colour TFT dash, which also gives you the chance to link your phone.

The redesigned front brake arrangement is nearly a kilo lighter, the tank  four litres bigger, rider and pillion seats plusher, and the completely redesigned wind-tunnel influenced bodywork gives the bike a higher top speed as well as improving rider cooling. There’s a chance of more comfort for the rider too, thanks to the more forward position of the new height adjustable bars.

Less altered is the single-cylinder engine. It benefits from improved mid-range torque courtesy of a 40% bigger airbox, but performs as keenly as ever, revving freely and keenly. Flexible and tractable enough to make good progress without needed too many revs, it’s nevertheless worth spinning a little harder thanks to the extra pull that generates and the involving and rewarding feel that comes with it. With perfect fuelling, and a very friendly character overall, it’s an easy engine to use, even very hard, and is one of the main reasons behind the user-friendly nature of the bike. 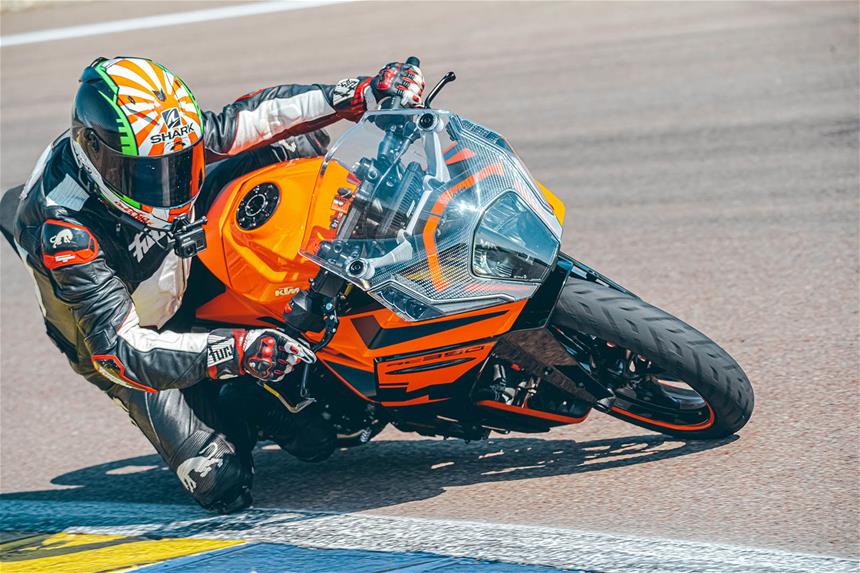 Half a day in the Maranello hills let me assess the handling of the agile 155kg bike really well. They weren’t the sort of roads where any sort of mistake would be forgiven, especially when you were riding harder. But the 390 felt really safe and manageable. Much of that was down to its lightness and the feedback it offered. The WP Apex forks and shock provided superb control over some pretty rough surfaces that undoubtedly would have limited the progress of the vast majority of the KTM’s rivals. Like the electronics, the suspension quality is a virtue that sets the RC390 apart from the A2 class competition, which includes the Honda CBR500R, Kawasaki Ninja 400 and Yamaha R3.

With its relaxed riding position, and commendable wind protection, I’d wager longer rides are possible without aches and pains. Of course, I can’t vouch for the all-day comfort of the seat, though the longer range offered by the bigger tank will make touring all the more convenient. Longer-legged riders might find the position of the new folding footrest a little high mind you, although a good chunk of buyers will be supple youths for whom comfort will be low on the list of priorities.

The thoughtful nature of the new bike’s design is emphasised by its bolt-on subframe, making accident repairs more economical, as does the repositioning of the centrally-mounted electronics to give better access to service items, as well as a more preferred weight distribution.

The improved performance of the RC390 was certainly highlighted when we were taken to the Autodromo di Modena, a very tight and twisty circuit. Again, nothing seemed to faze the KTM and though in the 30°C heat, the relatively skinny Continental ContiRoadAttack rubber felt a little short of feedback right on the edge to begin with, but overall the tyres were grippy enough for me to lap quickly and safely. No doubt in the cooler climes and less toasty road surfaces of the UK they’d be fine.

The new RC390 will be on sale early next year at an estimated cost of £5500. While that may seem like a lot of money for a small capacity single, buyers will be getting a very highly specified machine for their money. It’s also a machine that blows away the theory that smaller bikes have no right to sit at biking’s top table.