Piaggio’s MP3: a three-wheeled machine, that can be ridden on a car licence. It may have seemed like a wacky concept when it was released in 2006, yet 15 years later, it’s still going strong.

The Piaggio MP3 is a funny thing. Although it looks a lot like a generic scooter in its appearance (ignoring that extra hoop on the front, of course) it’s actually a bit of an oddity and by just holding a car licence and being over the age of 21 you can ride one of these things.

Yep, no CBT, no restricted licence, nothing. And that’s exactly the point in it, it’s meant to give the fun and ease of two wheels, but with the stability of three. This is thanks to the tilt lock, which is a device that lets you lock the front wheels when you get down to 3mph, so it will stay upright. Yep, it really means that there’s no need to stick your legs down or try and balance at every set of traffic lights.

So essentially, it’s a 300cc four-stroke engine in a scooter type chassis, that offers the practicality and fun of a scooter, without the need to completely commit to one – whether that’s as far as getting your licence, or even just getting used to the concept of balance.

Aimed at attracting new riders to the world of motorcycling, the MP3 has range has sold impressively (especially in mainland Europe) since it hit the market all those years ago. But just how does it ride? I’ve been riding motorcycles for most of my life, but this would be my first experience of a Piaggio MP3. 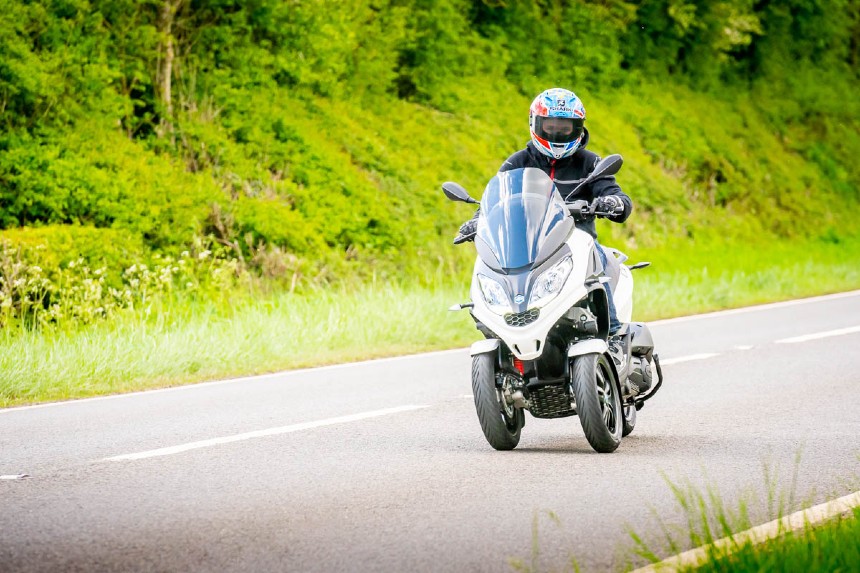 In all honesty, I really wasn’t sure what to expect. I mean at first glance, the MP3 does look fairly strange with its third wheel, but it’s by no means a dealbreaker. It’s got a lovely finish to it and looks sharp, and the riding position feels just like a scooter should.

In fact, sitting on top of it, there’s absolutely no way even an experienced scooter rider would know that are two wheels up front, besides a couple of unfamiliar looking buttons, a footbrake (which operates the rear brake, as does as the usual lever on the left handlebar) and a handle below the ‘bars, which is actually the handbrake.

You have to actually press a button to engage the steering lock, otherwise it can fall over like a normal bike, so just to get used to it, I decided to have a play around without the locking mechanism, to see how just much like a scooter it really did feel. Hoofing the MP3 of its centre stand for the first time, the weight of it says otherwise, as it feels every bit of the 225kg wet weight, which is pretty hefty for a scoot in a world where most 300s actually weigh in under 190kg.

Besides the chunkiness, everything else seemed completely normal, and the ride felt as smooth as can be expected, with a comfortable riding position, smooth power delivery (although given the chance, I’d opt for the 500 for a little more go) and powerful brakes.

The handling aspect is where it does feel slightly odd to someone brought up on more traditional two wheelers. Don’t get me wrong, it doesn’t feel unresponsive or unpleasant, but especially on the change of direction, it’s produces a different feeling as the weight transitions from one wheel to the other. It does mean that there’s a slight feel of understeer, but even so it actually feels incredibly safe, because there’s double the grip up front, which I wasn’t expecting. As far as riding experience goes, the MP3 does deliver an impressive ride.

But the real test came when I hit the town and tried out its front wheel locking mechanism. That does feel incredibly odd at first, because when the MP3 hits 3mph or lower (which is still enough to balance with ease) a little light comes up on the dash, which means that the wheels can be locked in place.

The first couple of times I did it, I honestly found it a little dangerous as I was still moving but couldn’t lean at all, which was one of the strangest feelings I’ve ever had a on ‘motorcycle’. It’s so at odds with anything I’d ever learnt, but after a few attempts I had the hang of it, engaging just as I came to a standstill.

Once you pull away and get over the speed threshold, it automatically disengages which is good, but I have to admit it took me longer than expected to fully trust it; 15 years of muscle memory of putting your feet down to not fall over doesn’t just disappear straight away, and in all honesty, I always felt more comfortable just having a little bit of a hover too, although I did enjoy just locking the wheels and sticking the handbrake on when getting off.

It was fun, but I do think for a competent motorcycle rider it’s unnecessary. But then again, this isn’t a machine marketed for your everyday motorcycle rider, and if that extra safety net of being able to stay upright when stopping is what you need to convert to two (okay, three) wheels, then it’s absolutely spot on.

There are probably two types of buyer: commuters who want a scooter bigger than 125cc but don’t want to go through the process of getting their licence, as well as those who like the added security of having that extra wheel up front.

For me though? It was a different experience, that really was fun. But in all honesty, the main benefit of the MP3 is the stability at a standstill, and that is something that I’ve never had an issue with. But for a new rider, or a driver who doesn’t have a licence to ride a 300cc two-wheeler? It’s genius.

From full race systems to external road vests, airbags have become an increasingly integral part of a riders’ gear over the last few years. So just how effective are they? Carl Stevens had the chance to try one out.