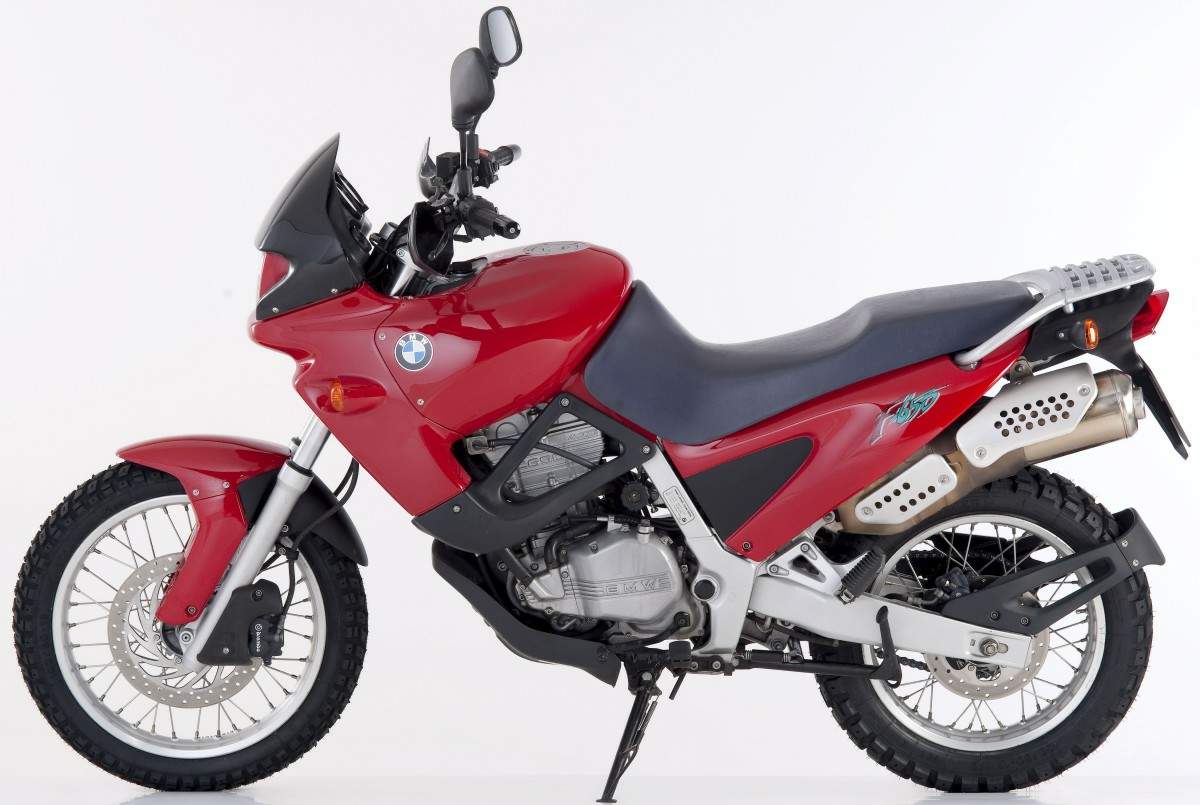 The Thunderbolt was the first model produced making full use of Harley Davidson’s financial and development resources following the acquisition of 49% of Buell by HD.

The Thunderbolt´s 65bhp 1200cc motor may not sound that exciting, but this was also a unique handling, and dramatically styled machine.

From the Thunderbolt onwards, Buell have increased their production rapidly and begun a process of honing Erik Buell´s own vision of the perfect sporting American V-twin motorcycle.

The ride through the sunburnt Californian hills was fantastic. For mile after mile, the Buell S2 Thunderbolt’s smooth and torquey motor gobbled up the straights in lazy V-twin gulps, and its quick-steering, sticky-tyred chassis sliced through the bends with ease. Ducati riders could definitely relate to this.

But sheer performance is not what makes the Thunderbolt the most important streetbike to come out of America for years. Previous Buells such as the RS1200 have combined speed with very acceptable handling. The Thunderbolt is better in many areas. And what makes this bike so special is that it represents a serious move into the sports bike market by Harley-Davidson itself.

The name on this bike’s petrol tank is that of Erik Buell, a former Harley factory engineer and national-level TZ750 racer. Almost ten years ago Erik set up the Buell Motor Corporation to design and build a Harley-powered sports bike. His small firm produced several quick and neat models over the years, and had some encouraging results in twins racing. But the hand-built Buells’ inevitably high prices kept sales low, and limited opportunity for expansion.

Enter Harley-Davidson, looking for a way to get into the lucrative sports bike market without either spending a fortune on R&D, alienating its current riders or risking an embarrassing flop like the XLCR1000 Cafe Racer of 1977. Last January the Milwaukee giant paid Erik an undisclosed sum to take a 49 per cent stake in a new firm, the Buell Motorcycle Company. Later last year, the firm moved from its cramped garden-shed base into modern and much bigger premises nearby at East Troy, not far from Milwaukee.

The Thunderbolt is the company’s first product designed and built by Buell, with vital input from Harley in development, finance and marketing. And this is just the start. Erik Buell talks excitedly about export plans, about new models including a naked bike along Ducati Monster lines, even about a Buell based on the watercooled VR1000 motor.

But more of that later. The more urgent need for the new firm to launch a bike quickly ensured that the Thunderbolt owes much to previous Buells, although it incorporates a vast number of changes. Fresh styling gives a more flowing look from half-fairing to tailpiece, and also shows more of the engine and frame. The seat and footpegs are set further forward, adding practicality in favour of the previous models’ uncompromisingly racy riding position.

The chassis remains based around a space frame of chrome-molybdenum steel tubes. Steering geometry is unchanged at 25 degrees and 99mm, but the new frame is narrower at the top and simpler in layout. Front suspension consists of upside-down forks from Dutch firm WP, adjustable for both compression and rebound damping and held in hefty alloy yokes. Marchesini’s 17-inch front wheel holds a single 340mm disc, which is gripped by a six-pot caliper of Buell’s own design.

In traditional Buell style the multi-adjustable rear WP shock unit sits horizontally beneath the engine, allowing a short 1397mm wheelbase, and works by extending its body to compress the spring. Also like previous Buells, the Thunderbolt holds the engine via Erik’s patented Uniplanar system, which combines rubber mounts with three rose-jointed rods which prevent side-to-side movement, but allow the 45-degree V-twin lump to shake up-and-down.

The 1203cc motor sits slightly further to the left to allow space for the fatter, 170-section rear tyre and a Harley-style Kevlar final drive belt. It’s a 1200 Sportster unit, left internally stock for the sake of reliability, and benefits from extensive development work to free its breathing on both intake and exhaust sides. Asked by Erik to design a power-enhancing exhaust system without worrying about its size, Harley’s engineers produced an efficient and huge silencer that sits alongside the shock.

Over on the right, the Thunderbolt’s 40mm Keihin carb sucks through a large, oval K&N filter that sits under a neat carbon-fibre cover. The result is a 20 per cent increase in peak power, to about 65bhp at 5500rpm (like H-D, Buell doesn’t release power figures), and a torque output less remarkable for its claimed 76ft.lb maximum than for a curve as flat as Lake Michigan. So you ease the bike off its rear-set, Harley-style sidestand, reach down to the Harley-style ignition switch and fire-up the motor, which sounds no louder than a stock Sportster as it idles with a typically lumpy note. The riding position is upright by sports bike standards, with footrests set fairly well forward and the raised clip-ons (higher than the bars originally fitted) giving only a slight lean forward towards the distinctive and neat instrument console.

First surprise, when you pull away, is just how smooth the Sportster motor is “or at least feels” when restrained by Buell’s Uniplanar mounting system. The gentle pulsing makes the rider aware that there’s a big twin down below, but at most engine speeds the Thunderbolt transmits less vibration even than a BMW boxer. That’s partly because the Buell is just so long-legged and slow-revving. On the first straight I accelerated briefly, glanced down and was amazed to find the speedo reading over 80mph and the tacho alongside showing just 3500rpm.

The Buell makes sub-100mph speeds seem effortless, partly due to the efficiency of its half-fairing, but mainly because the old pushrod V-twin feels so relaxed. Even at less than 2500rpm, the bike responded strongly and without the slightest splutter when the fat, Harley-style twistgrip was wound open. On winding and unfamiliar roads that meant I could use the torque to minimise gearchanges (although the five-speed box worked pretty well), letting the revs run low without fear of losing drive out of a bend. It was often hard to believe that this was basically a stock Sportster motor.

Acceleration above a ton was uninspiring, but given enough space the Buell kept on pulling towards a top speed of about 130mph. The motor felt a bit rougher between 5500rpm and the 6200rpm redline, though, suggesting that the last few hundred revs weren’t worth chasing too hard or too often. The pushrod motor hasn’t exactly proved bulletproof in Sportster racing, and its midrange performance means there’s little point in abusing it too much. There are no such doubts about the Buell chassis’ strength, although the bike’s handling is also best appreciated at slightly less than brain-out thrash mode. The Thunderbolt is fairly softly set-up, and felt less like a hard-core sports bike than a competent but slightly squidgy sports-tourer. For cornering at eight-tenths pace the maximum advisable for blind canyon curves it was superb, changing direction quickly with a nudge on the bars, and staying stable through and out of a bend.

For out-and-out scratching, though, the Thunderbolt felt slightly soft at both ends, even with the damping wound right up. That was particularly true at the rear, where the underslung WP shock, which doesn’t have the benefit of a rising-rate linkage, occasionally lost its cool over a series of bumps. For the majority of riding situations that wouldn’t have been a problem, but the Buell would still benefit from being firmed-up a touch.

Other motorcycle parts worked pretty much as intended. The single-disc brake gripped well in normal use and didn’t give any nasty moments, although it required a fair amount of lever pressure. (The fat Harley hand controls didn’t help.) And the respectably wide Dunlop Sportmax radials were sticky enough to make good use of the Thunderbolt’s heaps of ground clearance. Even so, the Buell isn’t quite the super-sports bike that its styling and racing heritage suggests. It’s a little softer, a little slower and a little more laid-back perhaps inevitably, given the slow-revving V-twin motor at its heart. But the Thunderbolt is still very fast on a twisty road, and a genuinely good bike for real-world motorcycling, working best at the 50 to 100mph speeds at which even most quick riders spend most of their time.

Get Buell bike insurance for the S2 Thunderbolt.

Get your free motorbike insurance quote »