We take a look at the history of bike building in the People’s Republic and consider what’s next from the country which manufacturers almost 30% of the products we use today.

Cast your mind back 30 years ago and, if you can, you might remember the odd Chinese motorcycle being imported in the UK.

They were terrible. This writer’s own recollections were of badly made copies of sub-125cc Japanese commuters (like the venerable Honda CG125 and Suzuki GP100) and clones of 1930s BMW boxers that made Soviet boxers look like the greatest motorcycles ever made.

A few of these Chinese domestic quality bikes were imported to Europe and flogged by various Del Boys at rock bottom prices. When they broke down (quickly and inevitably) the lack of spare parts meant that they ended up on the scrap heap, where they turned to dust quicker than they could make it to 60.

Those early imports massively harmed the reputation of Chinese motorcycle manufacturers. It was probably justified but, although the country had a reputation for making low quality products, many Western companies were subcontracting their manufacturing to China – particularly in the technology sector. Chinese factories were producing good quality products and this included in the automotive sector, where Western companies were lowering their costs by getting components made in Asia. In 2005 BMW signed an agreement with Chinese manufacturer Loncin, who have been making complete engines for the German giant since 2007.

It was around this same time that new brands like Lexmoto, Sinnis and Zontes started to appear in the UK.

While previous attempts at importing small Chinese bikes had failed, Lexmoto in particular proved that they could be a massive success and have regularly topped the sales charts in recent years.

Lexmoto’s model was to work closely with the various Chinese factories to ensure that the products met European quality expectations, while also putting in place good spares and dealer support. The motorcycles (and mopeds and scooters) still had their roots in older, more basic, designs but they were well proven and updated to meet changing market needs and tastes.

A number of more niche companies even took the concept a stage further. Brands like Herald and Mutt took these basic Chinese machines and reengineered them locally to create trendy learner legal retros with plenty of appeal to the Shoreditch set. Like Lexmoto, they continue to do brisk trade and, as their reputation and dealer network continues to develop, they are expanding their range to include larger and more expensive machines. 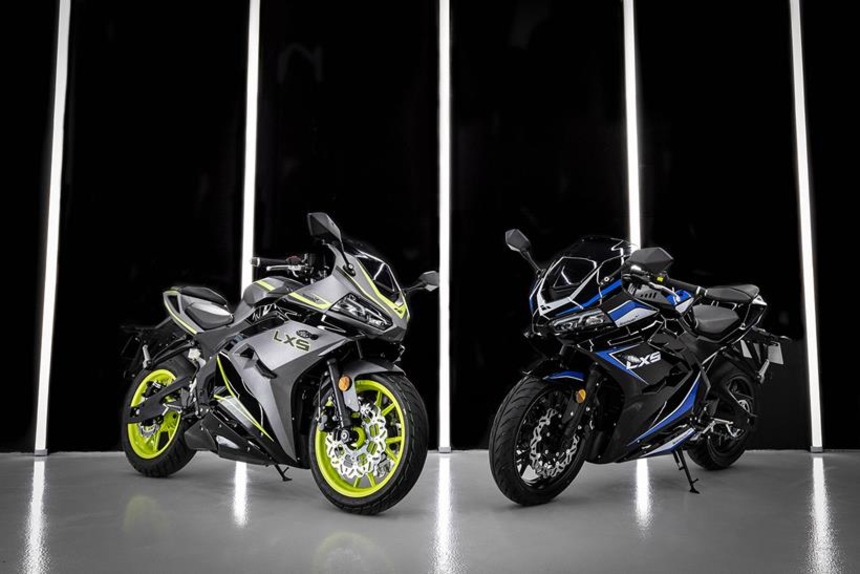 It’s sometimes hard to imagine, but in just over a decade we fully expect that the petrol motorcycles we know and love will no longer be built.

This has created an opportunity for some new brands to emerge, going all-in on electrification, and while startups like Italy’s Energica and Californian company Zero Motorcycles have made a play to become the two-wheeled answer to Tesla, it is in China where the volume produced bikes are being developed.

NIU and Super Soco have been regular names in the British sales charts in recent years, with technologically advanced learner legal small motorcycles and scooters. The pair are hoovering up sales to commuters and in particular to couriers at the new breed of delivery companies, while Sunra has also recently joined the party with its range of electric scooters.

With consumerism changing immensely in recent years, these low powered Chinese mopeds will likely become omnipresent in our cities for years to come. 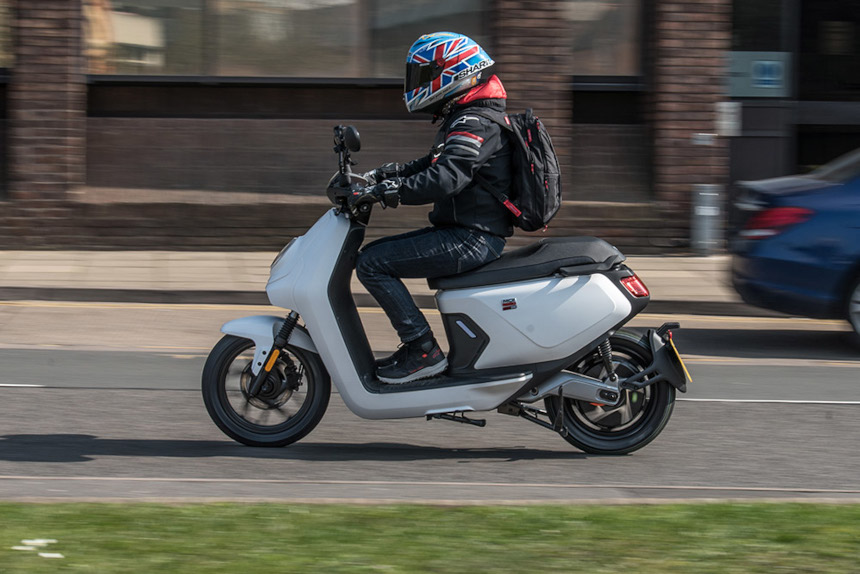 One of the most surprising narratives coming out of China is the development of larger capacity petrol bikes.

The CF Moto name has been around in the background for many years in the UK, with a 650cc twin selling in small numbers (and being raced occasionally at the Isle of Man TT Races) but they’ve recently upped their game. The company has a partnership with KTM, which has seen a series of new models designed by KTM stylists Kiska and the emergence of a new adventure bike powered by the old KTM 790 parallel twin motor. The extravagantly named Benda is another Chinese brand which is taking on Europe. Currently only on sale in Spain, Benda has recently announced a new V4 engine to go alongside its range of small capacity V-twins. It would be no surprise to see Bendas on sale in the UK and Ireland in coming years. 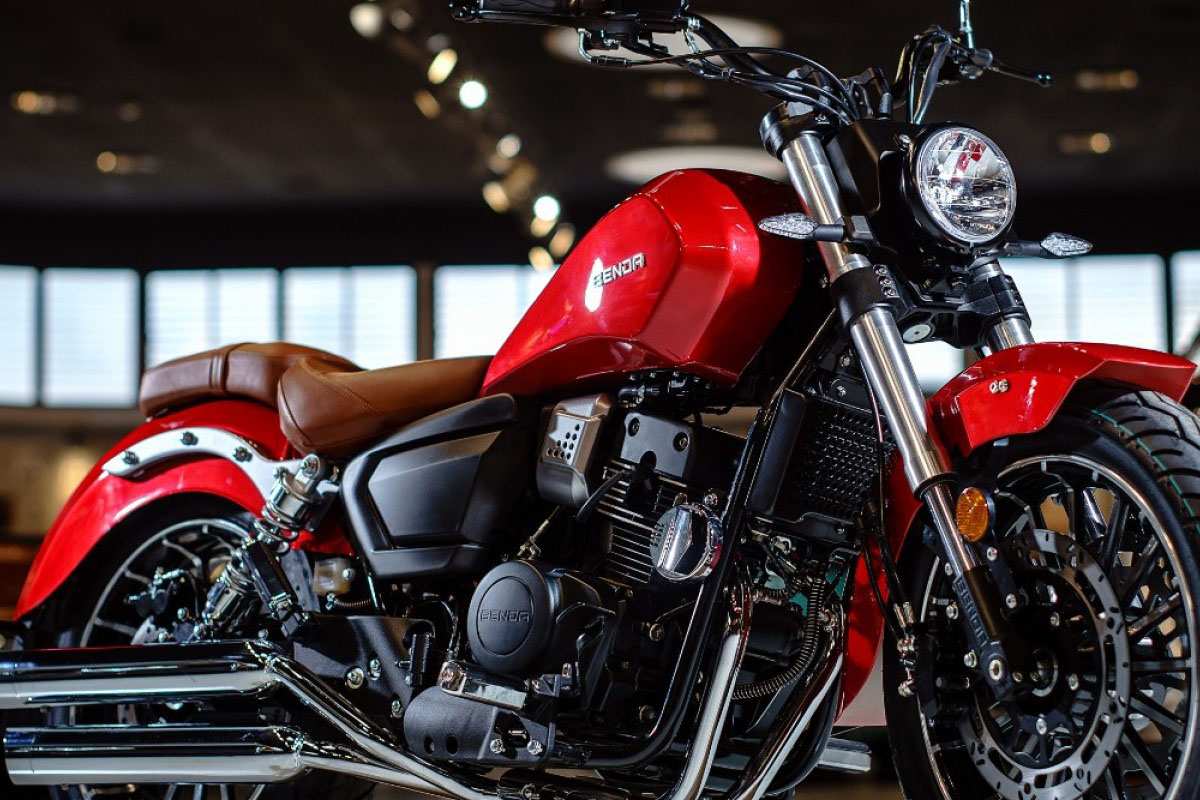 Perhaps recognising that brand names like Loncin, Benda and CF Moto lack emotion, Chinese companies have been snapping up some of the most evocative Italian brands from motorcycling history. Just as historic British names like BSA, Norton and Royal Enfield are now Indian owned, Benelli and Moto Morini combine Chinese funding and value engineering know how with Italian design flair.

Both have announced new designs aimed at global markets, including the recently announced Moto Morini 6½ range. The reborn Benelli also has the clout to take on the biggest names in the motorcycling industry, with parent company Geely also majority shareholders in some massive automotive brands – such as Lotus, Volvo Cars and LEVC, the company behind the latest generation of electric London taxis.

The challenges for these new Chinese manufacturers are the same as for any other new motorcycle brand.

Motorcyclists have traditionally been a conservative bunch and the idea of riding a Chinese brand still seems ridiculous for many, however the emergence of the Japanese motorcycle industry should provide a cautionary tale.

They were laughed at in the 1960s, but within a decade the Big Four were dominant and the American, British and Italian manufacturers were on their knees. Times are different of course and legacy manufacturers will not be complacent this time.

However, Europe and America may no longer be the focus for these bike makers in coming years and this, combined with the drive for emission free vehicles, means that the market is changing and open for new companies to emerge.

Of course, building a motorcycle is one thing, but there’s a lot of hidden work that needs to go on behind the scenes to get them to market and to deliver a customer experience that will keep us coming back for more – and that still gives the established manufacturers a head start.

Building distribution networks, appointing dealers, creating warranty departments, spares supply, training, homologation are just a few of the hurdles any manufacturer with ambitions for volume sales needs to tackle before going on sale. On top of that they’ll need to work with insurance and finance companies to ensure that consumers can actually buy and insure their Chinese motorcycles.

It’s a lot of work and one of the reasons why many new companies prefer joint ventures with established companies and distributors, to allow them to take advantage of their experience and infrastructure, but one thing is for certain: we are pretty sure we’re going to see these new Chinese motorcycle and scooter brands play a major role in the changing landscape of motorcycling in the UK and Ireland, and indeed across the globe.