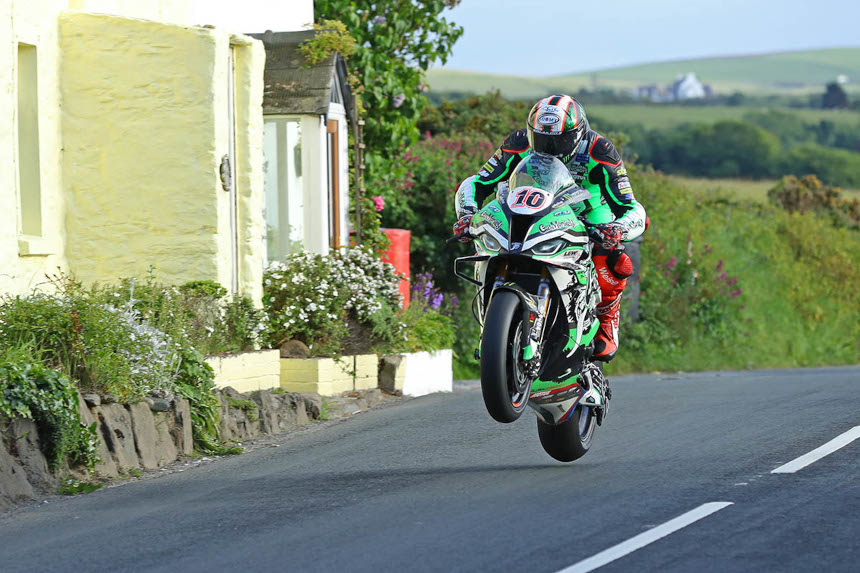 Love it or hate it, the Isle of Man TT Races is a unique event. The ultimate motorcycling challenge sees competitors take on the unforgiving 37.73 mile Mountain course in a time trial competition, while bikers from around the world make a pilgrimage to Mona’s Isle to create a two-week festival environment.

The eagerly awaited 2022 running of the races saw the introduction of live TV for the first time, with subscribers able to pay £15 and watch a TV quality broadcast of all the races and qualifying sessions. Despite the massive technical challenges, the innovation proved to be a hit, while neither Covid nor the current travel chaos did much to deter fans from making it to the event in person, with the Government reporting higher than expected visitor numbers – with the number of those travelling by boat up 10% alone over 2019’s figures.

Pre-event, there was much anticipation of the resumption of the rivalry between Peter Hickman and Dean Harrison, who had been the dominant pairing back in 2019. Michael Dunlop had been touted as a spoiler after signing to ride a Ducati Panigale V4R for the Paul Bird Motorsport team, but a last minute split saw the Northern Irish renegade switch to a Suzuki GSX-R1000.

There was a further drama for Dunlop when he switched tyre brands at the last minute. He dumped his contracted Dunlop rubber for Metzelers after namesake brand suffered a series of failures at the North West 200. Dunlop withdrew its slick tyres for the TT but still suffered some delaminations in the opening superbike race, encouraging Harrison to make an unprecedented switch of tyre brands to Metzeler mid event.

Despite running a treaded rear Dunlop, Hickman was dominant in the opening six-lap Superbike TT, a race which marked the 100th TT start of racing icon John McGuinness.

The combination of Michael Dunlop and his Suzuki may not have quite had the pace in the superbike races, but he took out both supersport races on his Yamaha R6. The second, a delayed two-lap dash, saw a good battle with Hickman, while the single Supertwin race was an epic between the two riders and their Patons – settled only when Dunlop’s machine expired on the third and final lap.

It was a quiet TT for Honda, although local rider Conor Cummins scored two podiums – in the Superstock TT and the week ending Senior TT – delayed until Saturday. Both races were won by Hickman, taking him up to nine career TT victories. Dunlop took the other two solo honours, moving him to 21 career wins. Only McGuinness (23 wins) and his uncle Joey Dunlop (26) have won more times on the Island.

Honda’s British Superbike rider, Glenn Irwin, made his debut and became the fastest ever TT newcomer with a 129.85mph lap in the Superbike TT. The Birchall brothers, Ben and Tom, won both sidecar races, but there was much sadness surrounding the three wheelers. French competitors Cesar Chanal and Olivier Lavorel crashed at Ago’s Leap just minutes into their first TT and, after an initial misidentification, it was confirmed that driver Cesar had been killed, while Olivier remains gravely ill in hospital. The second race saw when father and son team Roger and Bradley Stockton died in an incident at the same spot. In total five competitors lost their life during TT 2022, with supersport riders Mark Purslow and Davy Morgan also paying the ultimate price.

Away from the track, the island was buzzing with the festival atmosphere for which it is famous. The organisers invested heavily in a new fan zone, while the ever popular Carole Nash stage at the Bushy’s TT Village brought live music to the promenade each night.

With the most iconic scooter design of all time, it’s a case of evolution rather than revolution for Vespa but for 2023 there’s something new coming out of the Tuscan factory.

Big adventure bikes lead the way as BMW sells more bikes in one year than ever before during its 100-year history.

We don’t usually review motorcycle gear on Insidebikes, but when the opportunity to try out the world’s most advanced crash helmet came along we couldn’t help but make an exception…

At under £7000, Moto Morini’s new 6½ range offers a lot of machinery for an impressive amount of cash. But just how good are they?

Ducati’s Panigale V2 might seem like the ‘baby’ in their sportsbike lineup, but is it right in the sweet spot for going fast and having fun?