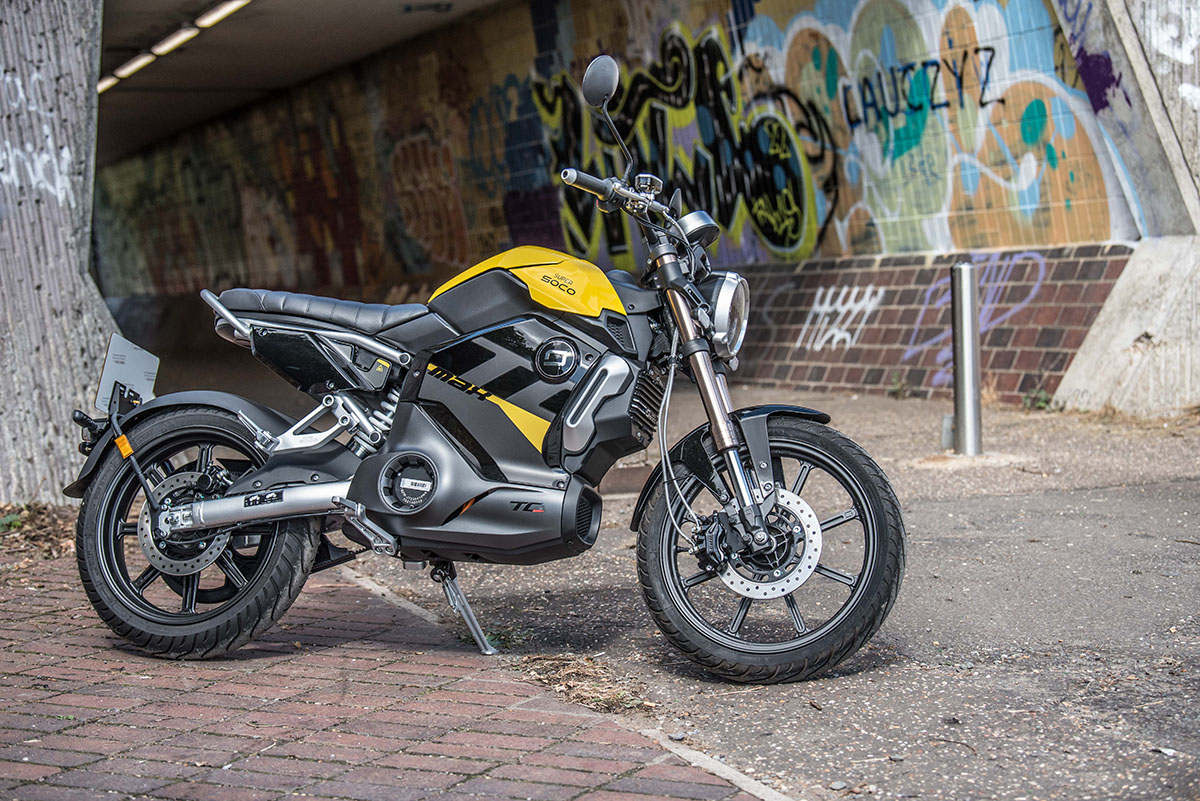 So often when you speak to an experienced motorcyclist about electric motorcycles they’ll trot out a well used phrase like ‘it’s coming’ or ‘it’s the future’ when the reality is that they are very much already here.

Sure, most bikers aren’t chopping in their BMWs and Fireblades for Energicas and Zeros just yet, but electric bike sales more than doubled again in 2021 and they represent a significant enough number of units to be very relevant these days. Much of that comes down to products from a new generation of Chinese motorcycle and scooter manufacturers, like NIU and V-Moto, the latter selling their products under the Super Soco brand.

You may not be familiar with Super Soco, but they have been around for a few years now. They specialise exclusively in small electric motorcycles and scooters which, in their own words, are ‘zero-emission electric vehicles that are quicker, better value than any 125cc or 50cc, and more flexible to use than public transport or a car’. 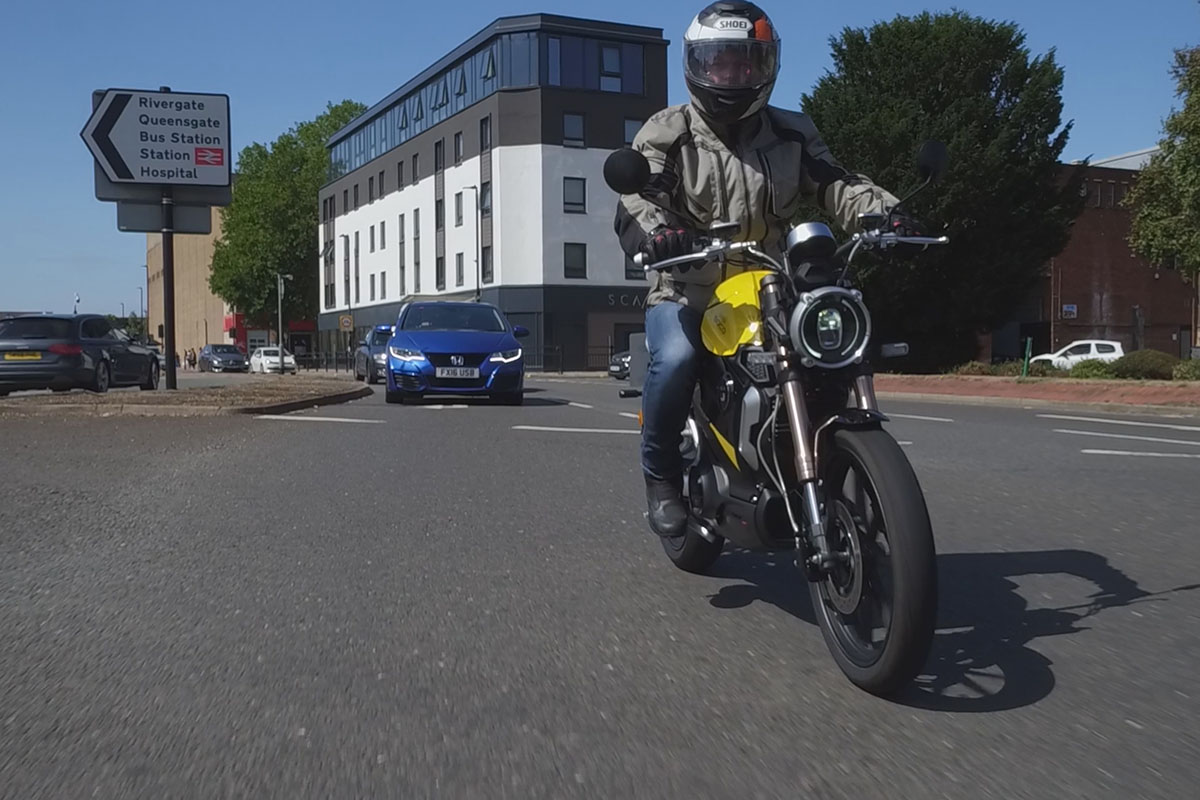 It’s certainly quite a claim, but they must be doing something right as Super Socos have been a regular fixture at the top of the UK’s motorcycle sales charts in recent years, with their mopeds proving popular with inner city delivery riders and this, the TC Max, becoming increasingly attractive to commuters looking to avoid the stress of public transport.

The TC Max is Super Soco’s range topper. The UK Government offers a £500 plug in electric vehicle grant, meaning that it costs £4399 for the version we are riding here, with an otherwise identical spoked wheel version costing £100 more. As an A1 licence bike, it can be ridden on L plates by riders aged 17 and above, once they have completed their day’s compulsory basic training (CBT). For 16 year olds, the standard ‘TC’ model can be specified as a moped, priced from £2899.

You’ll need to look at the pictures and make your own mind up on the styling, as I find it difficult to put into words. It’s an unusual mash up of modern and retro, with fully enclosed bodywork and slightly more compact dimensions than a typical small motorcycle.

It sounds like a recipe for disaster, but personally I think it looks rather smart – although I am a sucker for a yellow vehicle, as our test bike was. More subtle black and grey and black and red combos are also available, alongside a not quite so in your face orange option.

The price is in line with some of the mid-to-higher spec 125cc petrol bikes on the market and overall it feels like a quality product. The bodywork may be very plasticky, but the touch points on the bike are anything but.

The rather retro stitched saddle looks very cool and was comfortable enough for me, while I liked the fact that the handlebar grips were also nice and, erm, squishy. Something else I appreciated was the silver detailing on the brake levers and brake fluid reservoir. Small things, for sure, but I think that it gives a more premium feel than simply painting everything black.

Physically the TC Max is smaller than most petrol powered motorcycles, even 125cc learner bikes. On one hand that makes them very accessible, although I have a feeling that some taller riders might be put off by the diddy dimensions. As a smaller rider myself, I found it to be very comfortable, although even I would have liked it to have been a bit taller in order to give me extra presence and a more commanding view in city traffic. I’d also have preferred larger mirrors although, being a vibration free electric motor, the view was clear and vibration free.

City is where the TC Max is really at home. It is so light and agile and, combined with the instant power only an electric motor delivers, it darts through traffic like little else on the road. The term ‘125cc equivalent’ is banded around a lot when it comes to small electric motorcycles and while that applies to licence requirements to ride them, there can be huge differences in the actual performance of the machines.

A1 electric bikes (ones you can ride on a CBT and L plates) cover everything from the super trendy new Maeving RM1, with its 45mph top speed, through to the (much more expensive) Zero Motorcycles range, which have performance more akin to a 400cc petrol bike than a 125.

In terms of the Super Soco, top speed is a smidge under 60mph on flat stretches, which means that short stretches on dual carriageways are just about doable. It’s just about fast enough to stay in front of buses and trucks, which are often restricted to 56mph, although if I needed to regularly run on the open road I would probably feel more comfortable with a touch more top speed.

It’s good to see that Super Soco have fitted Michelin Pilot Street tyres to the TC Max. Rubber is often one of those areas where manufacturers scrimp on budget bikes, but it can be a false economy when they make riding treacherous in cold and wet conditions. Our time with the Soco coincided with 2022’s heatwave meaning we didn’t have a chance to sample what it’s like in the rain, but I know from experience that the Michelins are among the very best commuter tyres in miserable conditions.

When I first got on the TC Max I wasn’t overly enamoured with the brakes. As an A1 category motorcycle, it isn’t mandated to have ABS and, like many lower end 125s, it has linked brakes instead.

My initial impression was that these lack feel and need a good tug to pull the bike up, although the more I rode it the more my opinion on them mellowed. Would they put me off buying a TC Max? No. Could they be better? Yes, in my opinion.

While we’re on with things that aren’t my cup of tea, I really didn’t like the indicators. The switch is awkward to operate and there’s no push to cancel function, as you’d find on many other machines.

There’s also no aural indicator that the blinkers are on, such as a traditional clicking sound or even a synthesised bleep as found on some other electric bikes. And in bright sunlight – as most of our time with the Super Soco was – the warning flasher on the dash was difficult to see, which meant that there were more than a few times when I ignorantly rode around with my indicator on.

Again, it wouldn’t be a dealbreaker for me but I don’t think an established manufacturer would have let such a design make it to market.

The big single dial clock looks good but is a bit awkward to read in general. The traditional speedo sits a little too low for my liking, and I found the mph readings difficult to pick up at a glance.

Not only did I really have to look down, but the outer (kph) numbers are far more dominant and readable than the mph markings, which face a triple whammy of being smaller, orange coloured and in a somewhat stylised font. I also found the LCD inset, which shows riding mode, range and battery state of charge to be a bit busy and hard to read, although those riding the TC Max regularly will no doubt get to grips with it over time. 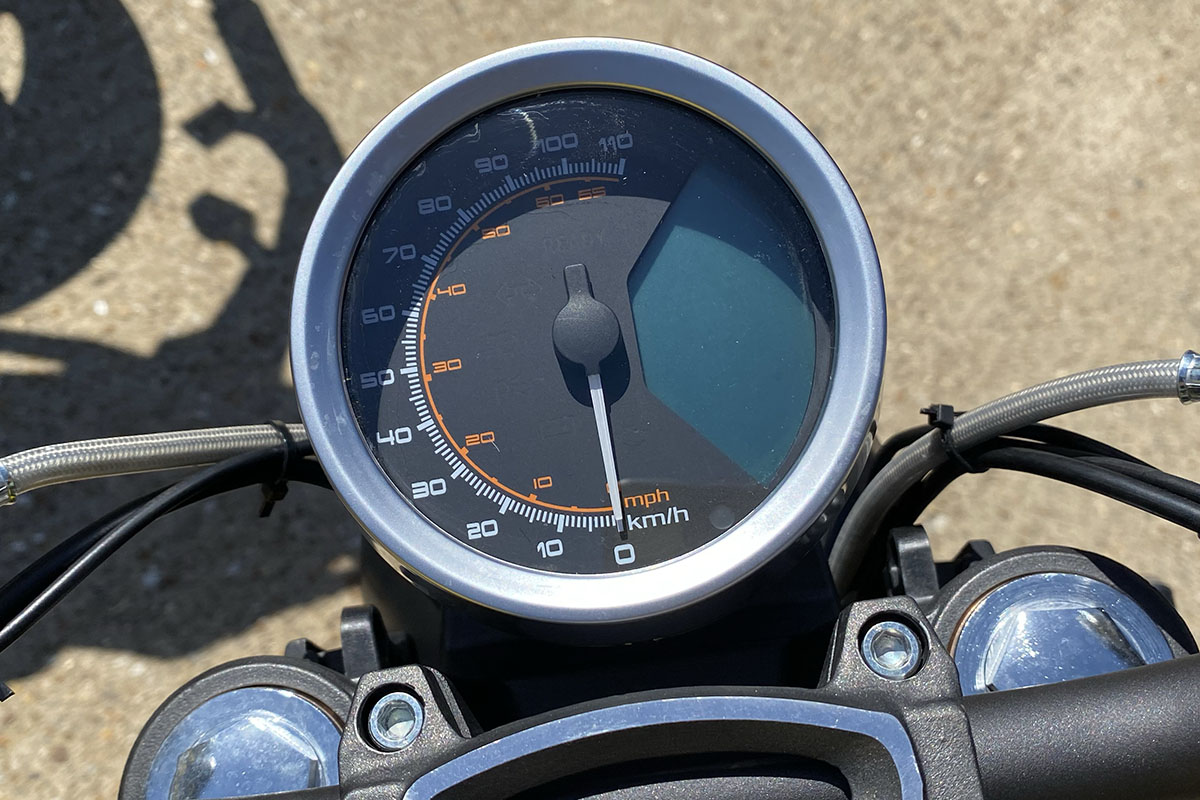 I’m conscious that I’ve had what appears to be a real gripe about the brakes, indicators and dashboard and that’s a shame because I genuinely do like the TC Max and want to end this review on a high. I totally get what it’s about and who it’s aimed at.

We borrowed our test bike from Wheels Motorcycles, a Super Soco dealer and electric bike specialist in Peterborough, and they told us that they are appealing to a wide demographic, with many being bought by youngsters who’ve just passed their CBT and others being used as inexpensive commuters by all sorts of older riders.

That’s the real appeal of small electric motorcycles. Veteran bikers will often dismiss electric motorcycles as soulless white goods, and for sure the Super Soco is not noisy and smelly like the Yamaha RD125 I rode as a teenager, but they are brilliant at getting people moving. Whether you’re a teen looking for independence, a shift worker who can’t rely on public transport or just a cost conscious commuter, small motorcycles can make a massive difference to people’s lives.

Of course, when we talk about electric motorcycles three questions almost inevitably get asked. How much does it cost? What is the range? How do you recharge it?

Cost, as we’ve already mentioned, is in line with mid-to-higher spec 125s, like the Kawasaki Z125 and Suzuki GSX-S125. Although these 125s are frugal and cheap to run, the Soco should be even less expensive to run based on a cost of around 50p to fully recharge that 2.7kWh battery.

Range will depend on how the TC Max is ridden. There are three riding modes, mode one limiting top speed to 35mph and mode three giving full power. We found Super Soco’s claim of 60 miles on a full charge to be pretty accurate in mixed riding, although this will go down if you find yourself riding everywhere at full throttle.

When it comes to recharging, it really is very simple. The bike comes with an external charger, which connects to a regular three pin plug and gives a full charge in around three to four hours. If you can take the bike indoors or up to a power socket, a port on the side of the bike allows it to be plugged in quickly and easily. If you can’t take the bike to the plug socket, don’t fear. The battery can be removed and taken to the power source. It’s pretty heavy and bulky, but its straightforward enough.

The battery is locked into place and needs the key to get it out. Indeed there are quite a few security features built into the TC Max. Operating the bike requires the use of the large remote control key fob, and this also activates the built in alarm. The security system also locks the wheels, meaning that the bike cannot be easily wheeled away by bike thieves – while the Super Soco app also provides a tracking facility.

There’s a lot to like about the Super Soco TC Max. It’s well made and offers good value for money. For city riding, there is more than enough performance and it certainly meets the company’s claim that it is cheaper and more flexible to use than a car or public transport.

Whether or not it represents better value than a traditional 125cc motorcycle is more subjective, but it is certainly very easy to ride and live with, and proves that there is a very viable alternative to petrol for those who want it.