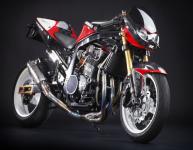 After thousands of bikers from across the UK cast their votes a “Yoshi fighter” built in honour of the famous Yoshimura race team has won the battle to be named as Britain’s best bike.

Lee Workman’s one-off Suzuki GSXR 1340 1990 drag-styled streetfighter was today (Saturday February 16) revealed as the winner of the prestigious Built in Britain contest. Lee, of Solihull, was presented with the award at the MCN Carole Nash London Motorcycle Show at the capital’s ExCel centre.

Having been voted by the great British biking public as the nation’s finest the stunning machine which Lee built over five years earned him a £1,000 cash prize and a Draper Expert toolbox worth £1,110. Second place went to Kevin Miller of Effingham, Surrey for his 1962 AJS 7R, restored in memory of his late father who raced the same model in the 1962 Isle of Man TT. Kevin will ride out of London with £500 to spend at bike parts and accessory specialist, M&P.

The contest’s new Pro-Build category was won by the “Dunkley-Harton” created by father and son team, Glenn and Gary Dance from Swindon’s Rolling Art Motorcycles.  The bike was commissioned by West Midlands based enthusiast Peter Dunkley as a one-off build with a 1960s period feel. It marries a 1200cc Harley-Davidson Sportster bike with a Norton replica featherbed frame, Honda components and custom parts engineered by Glenn and Gary. Taking the inaugural pro title earned its creators £1,000 and an Draper Expert  toolbox, both of which are likely to come in handy to their fledgling motorcycle customising, repair and servicing business.

OW16 Replica, a reincarnation of a Yamaha classic and  claimed to be the UK’s only new, hand-built, road legal, parade eligible two-stroke motorcycle.

As well as prizes the winners and fellow finalists have also enjoyed the prestige of having their machines photographed by top professional bike photographer Adam Duckworth. His stunning images were then used in Carole Nash’s 2013 calendar which is distributed free to over 65,000 UK and Irish bikers. In addition all 12 finalists bikes were displayed on a special Built in Britain stand at the NEC hosted Motorcycle Live as well as this weekend’s MCN Carole Nash London Motorcycle Show.

Commenting on the contests grand finale, Rebecca Donohue, head of marketing at Carole Nash, said: “The quality of entries this year has been absolutely tremendous and victory was incredibly hard fought as thousands of bikers discussed and voted for their own personal favourites online. To reach the finals was in itself a tremendous achievement, to win a momentous one. It’s great to be celebrating both the impressive creative and engineering skills which have gone into creating such a magnificent array of motorcycles”

The contest – previously known as Britain’s Got Biking Talent – is now in its sixth year. With six categories it embraces entries from across the biking spectrum from nostalgia drenched classics to cutting edge customs.

1st. From the Streetfighters category, Lee Workman, Solihull:  For Suzuki GSXR 1340 “Yoshi’ Fighter,” five years in the making from a a GSXR1100 engine bored to 1340cc, modified GSRX1100L frame with nitrous bottle, serving 240bhp at the wheel

2nd. From the Classics category, Kevin Miller, Effingham, Surrey:  For a 1962 AJS 7R, the “Boy Racer,” fully restored in memory of Kevin’s late father, who won a Silver Replica in the 1962 Manx Grand Prix and bought this bike. Kevin, his mother and a friend completed the project and Kevin rode the bike in honour of his father at this year’s Manx GP.

Shaun Wainford, Middlesborough: For Barbarian, a totally bespoke custom with 3D modelling and all parts by the owner.

David Stanley, Cambridge: For 1949 Vincent Rapide Series C, restored over six years after being off the road between 1964 and 2005 and resurrected “to be ridden and not hidden.”