What is an A2 class motorcycle? 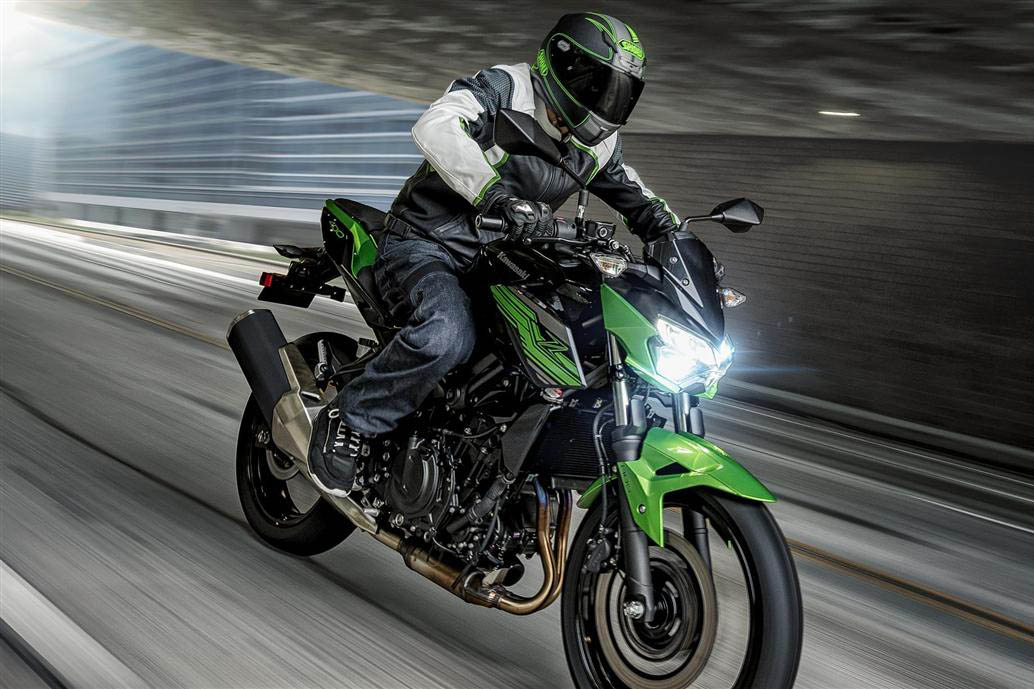 In recent years the term ‘A2’ has entered the lexicon of British motorcycling. It’s not the road out to Dover, nor a rather large piece of paper – instead it’s a category of bike that’s limited to 47bhp (or 35kw, to be more precise) and designed to be ridden principally (but not exclusively) by novice riders holding an A2 class of motorcycle licence.

In general there are two categories of A2 licence motorbikes you can buy new today. Most manufacturers build out the box bikes that fit the requirements. Honda’s CB500 series, for example, has been developed precisely with the regulations in mind and delivers bang on 35kw. Other A2 bikes include Kawasaki’s Z400 and Ninja 400, as well as Yamaha’s 321cc YZF-R3 and MT-03, and the KTM RC 390 and Duke 390.

The second type of A2 bike are the ones that can be ridden with a restrictor fitted. This includes things like the Honda CB650 range, Kawasaki’s 650 models, the Yamaha MT-09 and Triumph’s new Trident 660. These bikes make more than 47bhp in standard trim (but not more than 95bhp) but have been designed to have an official restrictor kit fitted by a dealer where required, which will reduce the power to below 47bhp and make it legal to ride on an A2 licence.

Am I limited to an A2 licence bike?

The A2 licence regulation was brought in some years ago, to stop inexperienced young riders jumping straight on to high powered machines.

Below 19, riders have to serve their apprenticeship on a bike of 125cc or less – called the A1 category. It’s not necessary to pass a full test to ride a 125, you can ride on L plates after passing the CBT (compulsory basic training) but to ride an A2 bike unaccompanied you will need to pass the CBT, theory test and then a two-part practical exam. The first part (MOD1) focuses on slow speed skills off-road, while the second (MOD2) is a traditional on road driving examination.

After two years on an A2 licence, at a minimum of 21 years old, riders can upgrade to a full unrestricted licence by taking a further test on an eligible bike. Riders aged 24 and older can go straight to this ‘direct access’ and don’t need to be restricted to an A2 category bike.

It’s a little complicated! The A2 test must be taken on a motorcycle which complies to A2 regulations, but which is at least 395cc (therefore excluding Yamaha’s ‘300’ models) and making at least 27bhp.

The driving examiner may ask for proof that your bike is eligible, in the form of an official letter from a main dealer or the bike manufacturer, although as most candidates take their test on a riding school’s bike it’s not usually as complicated as it seems.

Can I just get a powerful bike and restrict it?

There is no maximum engine capacity for an A2 licence bike, but there are some other criteria. Firstly, the unrestricted version of the bike cannot make more than 95bhp – which is why you will find that many new middleweight bikes on sale today are engineered to deliver this power output.

There are also power to weight criteria as well, to stop people creating a loophole by riding superlight 47bhp motorcycles. Restricted bikes must have power to weight ratio of 0.2kw per kg or less and cannot be restricted by more than 50%. That means that you cannot restrict high performance modern sportsbikes (although some older 600cc machines may fit the criteria) but there are a wide range of motorcycles that can be modified, including big capacity cruisers and touring bikes.

How are bikes restricted?

There are no hard and fast ways to restrict a bike to meet the A2 rules. Most modern bikes are restricted through the electronics, reprogramming the bike’s brain (the ECU) and throttle. Older, more analogue, bikes can use a variety of other methods such as putting restrictors in the inlet or exhaust ports, or through stopping the throttle from fully opening.

In the case of modern bikes, not really as the manufacturer kits will retune the bike seamlessly and create a motorcycle that should provide great performance. Most new A2 bikes can still comfortably exceed the national speed limit and have enough grunt to carry a passenger if required.

DIY restriction may be trickier and there’s a risk that the characteristics of the motor might not feel so great, especially if you are trying to restrict a high revving four cylinder engine. Restriction kits are available for some popular older bikes, which a competent home mechanic should be able to fit, but if you go completely DIY you’ll need to ensure that you meet all the regulations. Get the numbers wrong and you might find yourself in hot water if it gets checked by the police and is found to be over the power limit, as you’ll essentially be riding a bike that’s not eligible under your licence. That’s likely to get you into trouble with the law, as well as invalidating your insurance.

So can I ride a classic motorbike on an A2 licence?

If it meets the rules, absolutely! Many older bikes will already slot into A2 territory, while others may need a restrictor to keep them legal.

What about electric motorcycles?

What happens when I pass my full test?

If you pass your full bike test you can continue to ride your bike as it is. If your bike has been restricted to make it A2 compliant, you can have it derestricted to unleash full power. Don’t forget to inform your insurance company though!