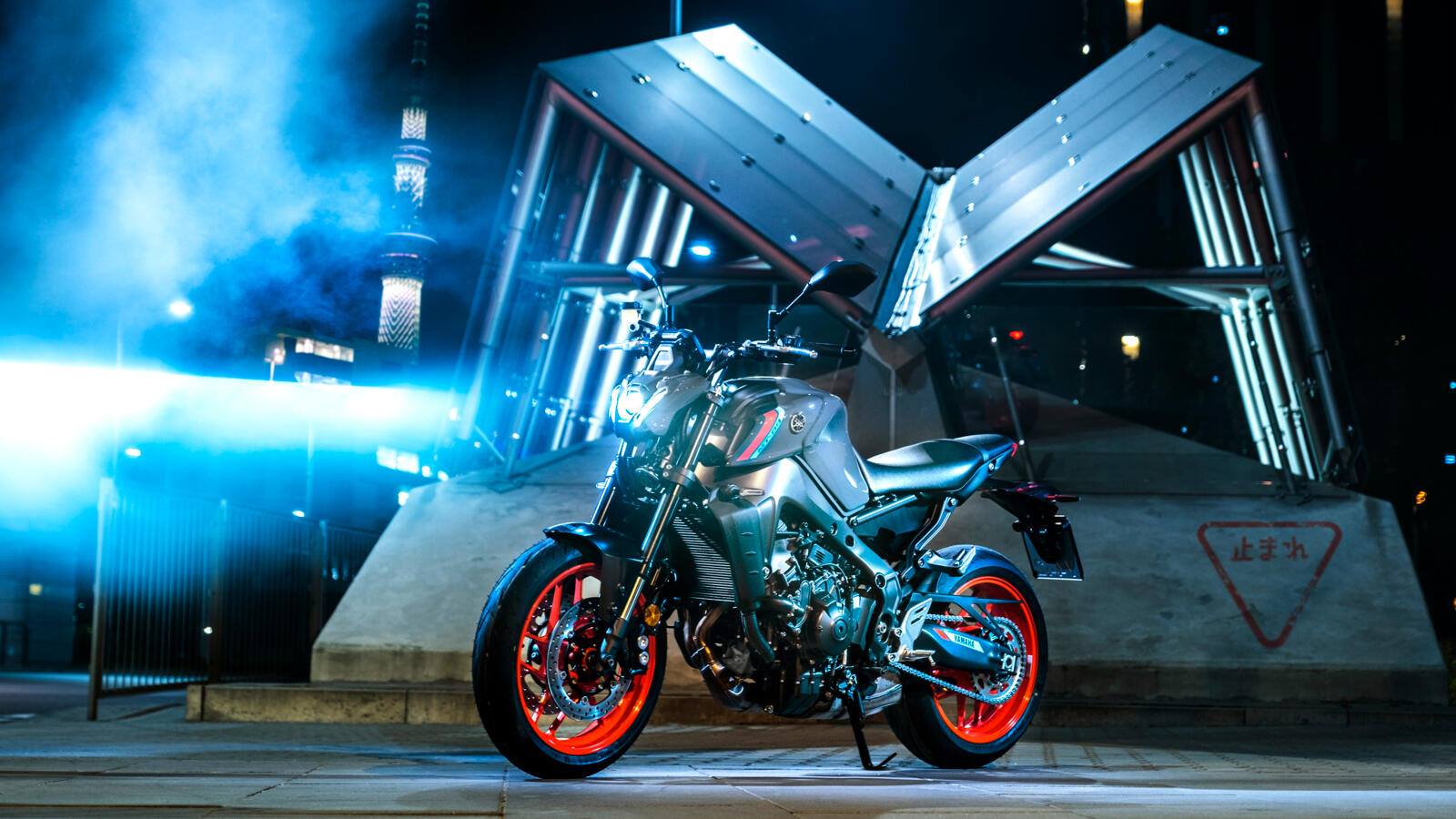 Manufacturers across the world have been busy launching new models over the past few months, updating their existing line-ups to comply with the new Euro5 regulations and in turn taking the opportunity to significantly upgrade the foibles and outdated components of the outgoing bikes.

It also looks like there’s a big emphasis on unfaired motorbikes this coming year so, with that in mind, here’s a selection of the most anticipated naked bikes we can look forward to in 2021. 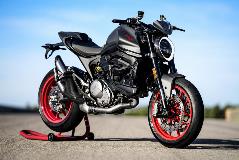 Ducati hasn’t disappointed with their 2021 line-up, introducing a V4 Multistrada adventure bike, reviving the SP suffix for an addition to the Panigale V4 range, as well as releasing this all-new Monster.

It’s fair to say that the Ducati Monster is an icon of the Italian brand. Over the decades the Monster has remained a staple in the Ducati range, evolving over time and selling more than 350,000 units over 27 years. So, what’s the new one all about?

At first glance the styling looks more generic than recent Monsters, almost like a Japanese naked, as opposed to the model’s usual distinctive stance. The reason being is that Ducati have decided to go back to the basics and create a new generation of motorcycle which is lighter and more accessible than the outgoing model.

The trellis chassis, a key design element of Ducati for the past three decades, has been swapped in favour of an aluminium front frame, too, in the style of the Panigale V4 superbike, that weighs just 3kg, a huge 4.5kg less than the old one!

Replacing the old 821cc model, the 2021 Monster harnesses Ducati’s 937cc Testastretta motor which has previously been seen in the Hypermotard and SuperSport bikes. The Euro5 spec engine is claimed to deliver 111bhp, similar to the outgoing engine, but is almost two-and-a-half kilos less in weight. 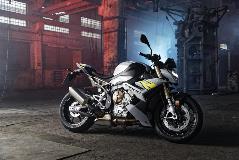 With the new Euro5 regulations coming into force, BMW have taken the opportunity to completely revamp the S1000R for next year, a model which has been a standout in the range since its introduction six years ago.

Since its release in 2014, the R has always been the disrobed brother of the S1000RR superbike, with the German firm taking the motor from their superbike and modifying it for their roadster and detuning it from 200bhp to 165bhp. But it’s never been the case of just reducing the R’s power, the techs at BMW Motorrad have optimised the mid-range and have changed the gearing to put an emphasis on acceleration rather than outright top speed. Which makes complete sense for a naked machine.

The frame and swingarm are also based on those found bolted to the latest double R and is 5kg lighter than the one used on the outgoing S1000R. It all adds up to 165bhp motorcycle that weighs in at 199kg: that’s a boost of 5bhp and a weight loss of more than 6kg over the model you could buy in 2020.

As standard, the naked R comes with three riding modes, dynamic traction control and cornering ABS but, the optional extra ‘Riding Modes Pro’ allows for even more adjustability, including the ability to tweak the engine braking and torque control. There’s also launch control and a ‘Power Wheelie’ function with the optional package, which allows the rider to change how much they can let the bike wheelie on corner exit should they so wish.

The base model costs a reasonable £12,055, although it’s easy to spend more than half as much again if you tick all the option boxes. Topping the options list is the £2,800 ‘M’ package, which brings lighter, forged aluminium wheels, lightweight battery, chain and silencer, as well as a sports seat and a livery in BMW’s traditional motorsport colours. Not quite enough? Swap your forged wheels for carbon fibre hoops for an additional £2,100! 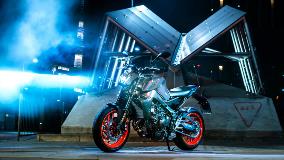 Announced in November, the new MT-09 SP is smarter, sharper and more exclusive than ever, with trick suspension and a new colour scheme inspired by the Japanese marque’s flagship R1M superbike.

The standard MT-09, which the SP is based on, has also been revised for 2021 comes with a heavily revised, 119bhp, 889cc Euro5-compliant CP3 engine enclosed in an all-new aluminium die-cast frame. It also comes with revised rider aids, such as a quick shifter, traction control, wheel lift control and a brake control system. On top of that, the dashboard has had an upgrade, introducing a modern full-colour 3.5-inch TFT display, while the styling has been revised to reflect the new ‘MT’ family design, which is also seen on the new MT-07.

The fancy SP version gains upgraded suspension, with a fully-adjustable KYB front suspension package to go with the Öhlins rear shock absorber. There’s also a new double-stitched seat and the R1 inspired colour scheme, which features a new blue and black livery on the air duct and fuel tank. Adding to the rider aids featured on the standard MT-09, the SP will also include a cruise control system for a more relaxing ride.

Expect to see the MT-09 SP in dealerships next March. 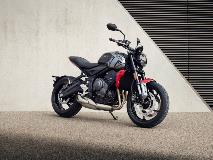 Triumph have added to their roadster line-up to accompany the existing Street and Speed Triples in the form of the brand new Trident 660. The Trident name returns to Triumph’s model range in 2021 for the first time since the 1990s, and it could be a very popular model.

Introduced to rival the likes of Yamaha’s MT-07 and target the next generation of Triumph riders, the Thai-built Trident is powered by a 660cc triple producing 80bhp, including road and rain riding modes, traction control, slipper clutch and a colour TFT display. The starting price is an encouraging £7,195, putting it right in the mix with the MT-07 and Kawasaki’s Z650.

As part of the Triumph’s strategy to engage with the next generation of riders, there’s also an A2 licence kit available with the Trident, making it accessible and legal for people as young as 19 to ride. And with the British-owned manufacturer claiming the perfect combination of punchy linear power and torque across the whole rev range, it could prove to be the ideal stepping stone for new riders. 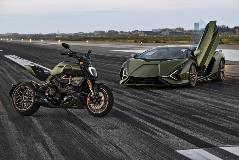 At the other end of the scale, Ducati has teamed up with Italian supercar manufacturer Lamborghini to create the limited edition Diavel 1260 Lamborghini.

Ducati’s and Lamborghini’s design teams collaborated on the project, with the bike taking the standard 2021 Diavel 1260 platform and adding a number of high end components and styling elements lifted straight from the new Lamborghini Siàn FKP 37 hybrid supercar. The 1260 uses the same ‘Gea Green’ paint as the car, while the frame and forged rims are painted in the same gold as the supercar’s wheels. Only the dash of red paint on the Brembo M50 brake calipers hint at the 1260’s Ducati heritage. Mechanically speaking, the Diavel Lamborghini edition is unchanged from the standard version, with the same 1262cc V-twin motor pumping out a healthy 162bhp.

Lamborghini is only making 63 examples of the $2m, 819bhp, hybrid car. The cars are all sold, but Ducati is making 630 examples of the £27,795 motorcycle. That feels like a relative bargain!