Changes to the European emissions laws has meant that many popular 50cc mopeds have gone off sale or been updated in recent years, but there’s still plenty of demand for stylish scoots that can be ridden by 16-year-olds.

Thinking of getting onto two-wheels with a moped? With fully automatic ‘twist and go’ transmissions, they’re all simple to ride and perfect for commuting in busy cities. Why not go get your CBT and consider one of these brilliant bikes we’ve picked out?

There was a time when Aprilia were all about the scooters. The company’s sporty step-thrus swarmed around Italian towns and cities throughout the 1990s, but since being taken over by Piaggio in 2004, Aprilia has been redefined as the group’s brand for sports bikes.

But there’s still a few scoots left in the Aprilia portfolio, and for that we should be truly thankful. The SR50R is at the higher end of the sports scooters you can buy in the UK today and still uses a two-stroke motor that isn’t quite as clean running as the four-stroke competition. 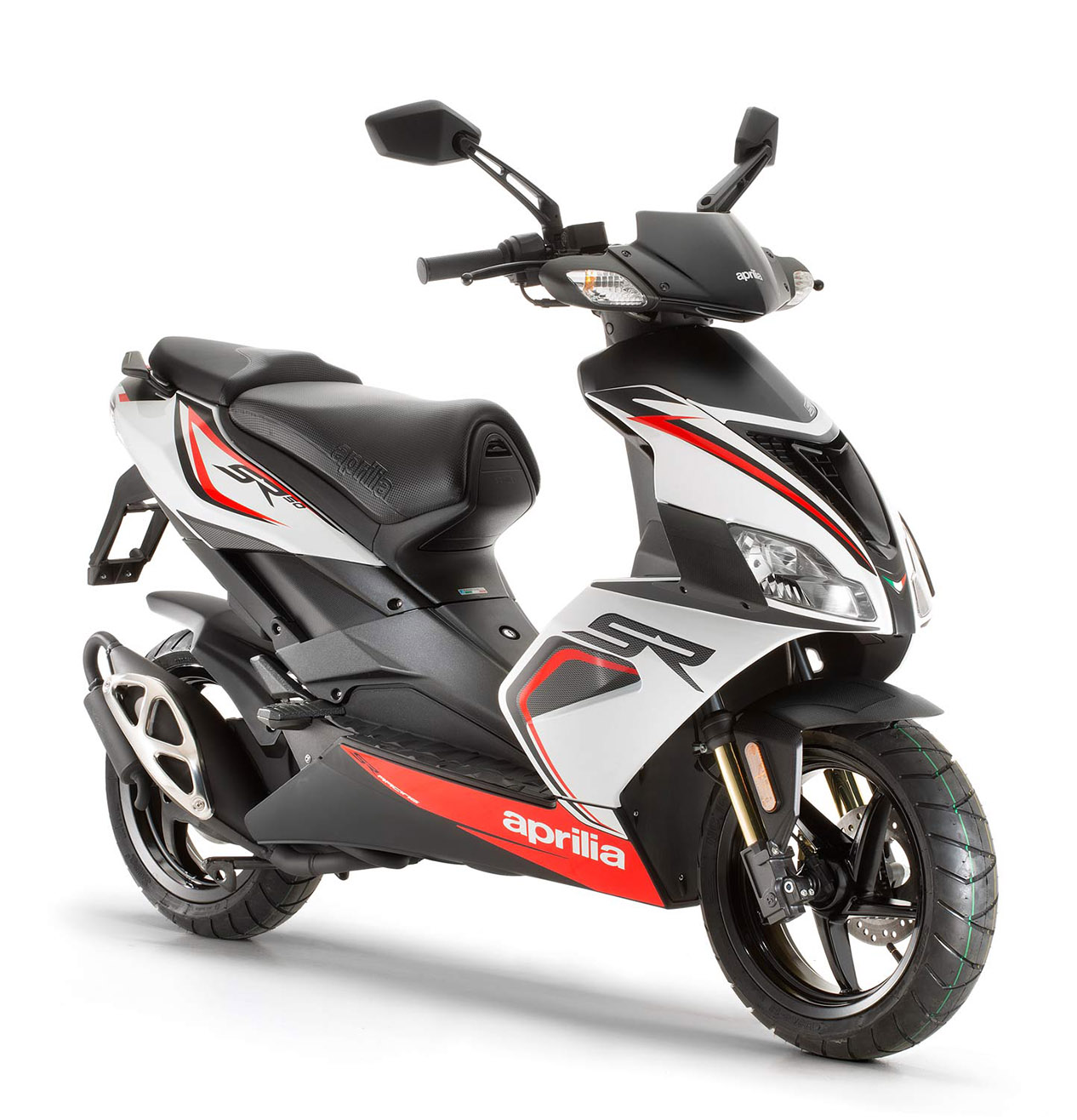 The SR first appeared in 1992 as one of the unsung models that proved a foundation of the Aprilia company in its golden period in the 1990s. This model alone has sold over 800,000 units as it has evolved over the years. The lines remain sharp though and, as always, echo the design elements and colour schemes of Aprilia’s sports bikes and factory racers. At £2629, it’s more expensive than its main rivals from Peugeot and Yamaha, but if you’re in the market for a sporty moped that’s dripping in top spec chassis parts, the SR50R is well worth consideration. There’s often a discount to be had on new ones, while the longevity of the model means that decent ones can usually be found on the second hand market.

Yamaha’s AeroX R was the most venerable of all sports mopeds. Despite a design dating back to 1997, the AeroX remained contemporary looking thanks to annual colour updates that were usually inspired by the liveries of Yamaha’s MotoGP racers.

Unfortunately all good things come to an end and, in the case of the AeroX, the need to replace the zippy little two-stroke motor with something cleaner saw the old R retired on its 21st birthday.

Fear not though, as a new version was introduced for 2018. With a clean running four-stroke motor, the Aerox 4 meets all the latest regulations. The styling has been given a bit of a makeover, but it’s still undoubtedly an Aerox to look at and ride.

At £2699, it’s one of the more expensive mopeds out there. It’s a quality scoot though, with a high spec and well built. What’s more, with Honda ending production of its long running NSC50 Vision, if you want a 50cc scooter from a Japanese manufacturer, your only choices are this, or Yamaha’s similarly powered (but lower spec) Neo’s at £2499.

Get Scooter Insurance through Carole Nash

Peugeot created a scootering icon when it created the Speedfight in 1995, and the fourth generation of its iconic sports model remains a popular choice for style conscious teens across Europe today.

But for all that’s great about the Speedie, we’re going to call out Peugeot’s entry level Kisbee for our top 10. 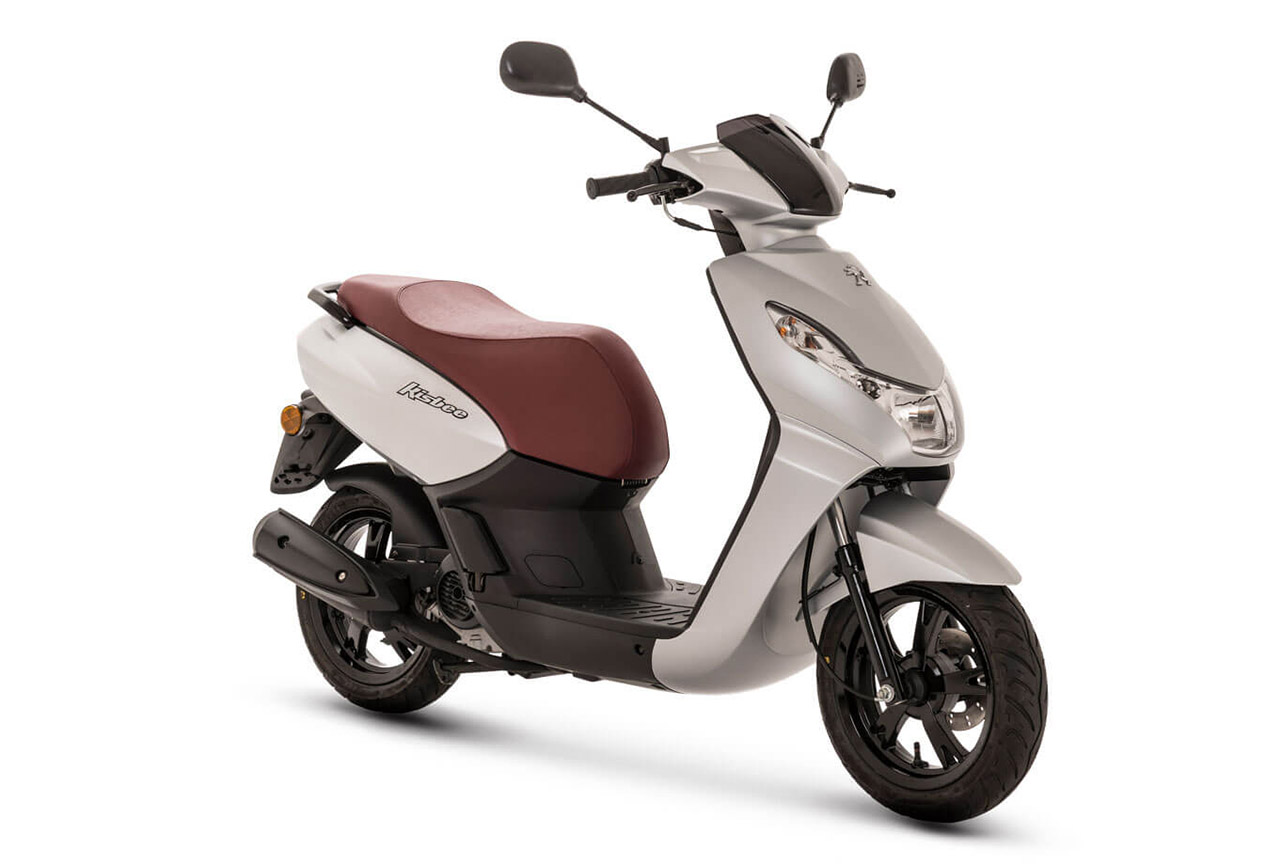 Priced at just £1599, £700 less than the Speedfight, it’s little wonder the Kisbee continually features at the top of the European moped sales charts. True, its specs are pretty basic, but it’s well built and good fun to ride. These scoots are all restricted to 30mph by law, but there’s no cap on acceleration. The Kisbee is powered by a wonderfully responsive four-stroke motor that gets off the line well and is much more engaging than most other 50s.

In the value stakes, it’s hard to beat the little Peugeot. We love it!

The Gilera Runner was arguably THE scooter of the 2000s.

Introduced in 1997, the Runner was the dream wheels of pretty much every Italian teenager of the time, as well as quite a few over here too. Gilera made 125, 180 and 200cc versions, as well as the restricted 50, and these provided the kind of headbanging performance that made them the machine of choice for a generation of Max Biaggi and Valentino Rossi wannabees. As if that wasn’t enough, tuning companies like Malossi and Polini made a full range of tuning parts to punch the motor out to 210cc and give even more performance. 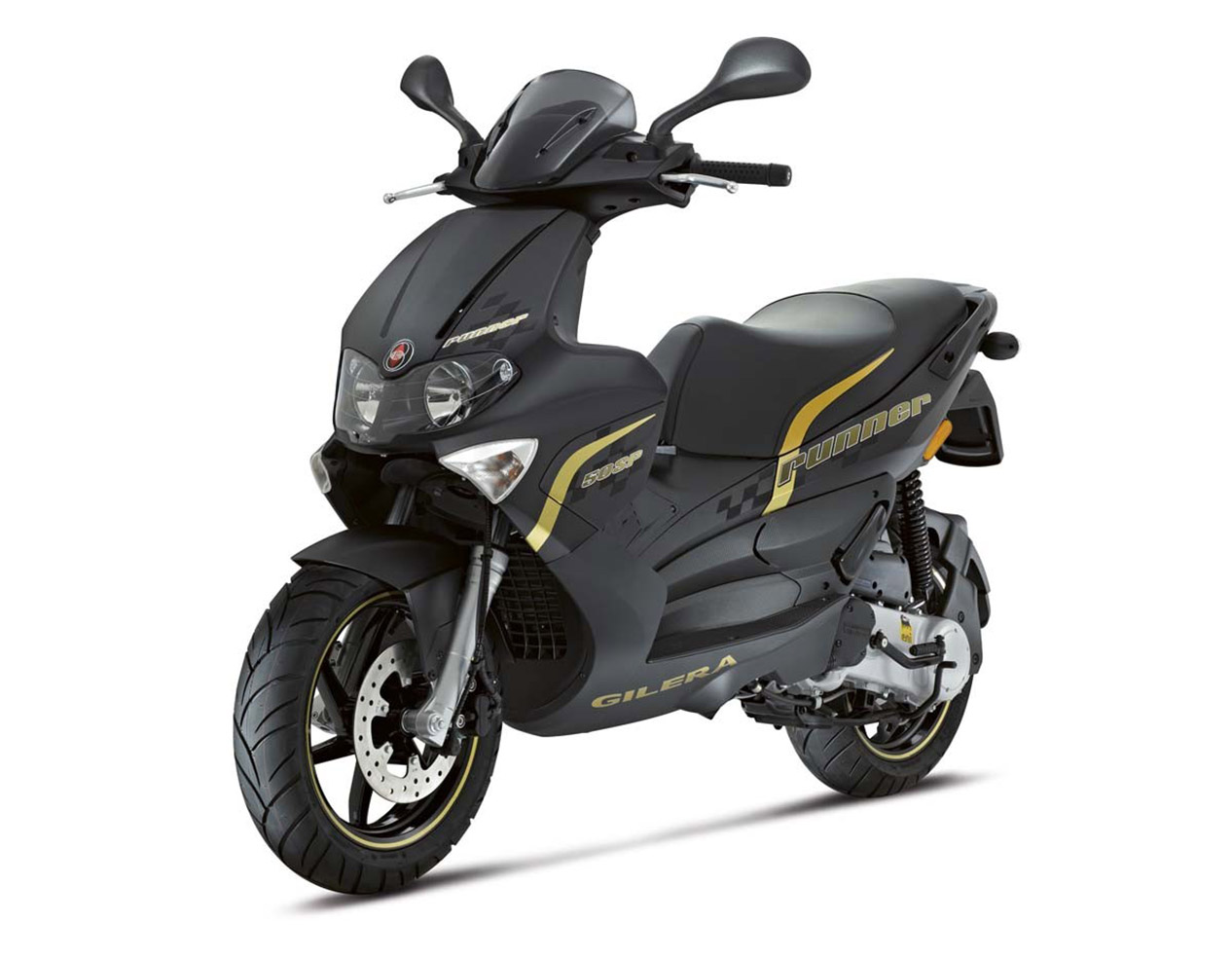 These modified bikes have all but disappeared, having been crashed, blown up (or both) by several careless owners. If you do want a Runner, the smart money would be buying a new one. The range is seriously rationalised these days, with just 50 and 125cc versions available.

The 50 is restricted, like all mopeds, but its powered by one of the last remaining two-stroke motors. It’s light, zippy and a modern day icon. A new one costs £2499.

The Vespa name needs little introduction, even to those without any knowledge of motorcycling. First introduced in 1946, the ‘little wasp’ became famous for its two-stroke rasp, curvy steel body and design so elegant it could only have come from Italy. These days the Vespa name is applied to contemporary designs inspired by the scoots of old (think BMW Mini or the modern day Fiat 500) and they remain a scooter of choice for the most style conscious of riders.

Vespa is, as it always has been, a brand of the giant Piaggio corporation and the latest scoots feature thoroughly modern four-stroke engines (not to mention a recently announced electric powered variant) with twist and go transmissions. 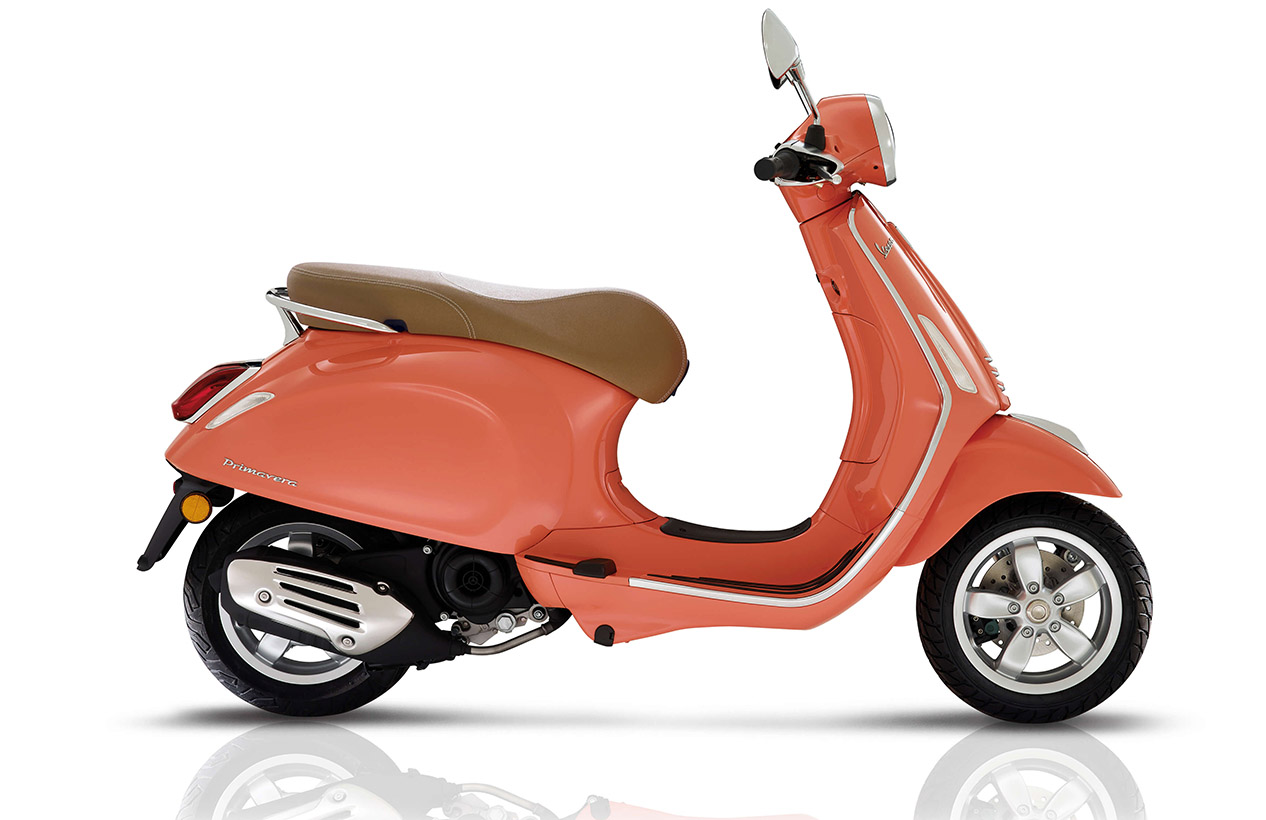 Engines go up to 300cc but, if it’s a 50 you’re after, the Primavera (Italian for Spring) is your model of choice. It’s the most traditional looking of the current line up, and comes in a range of bright colours that positively radiate happiness.

Indeed, there’s only really one downside – the price. At £3429 (at the time of writing) the Vespa is by far and away the most expensive 50 on the market today, however many buyers use them as a long term commuter choice, rather than a short term starter bike, which takes the sting out of the purchase price for many.

Lexmoto has been one of the great success stories of the British motorcycle industry in recent years.

It’s probably fair to say that the brand lacks the cache of the others featured here, but for riders looking for an inexpensive workhorse, these Chinese bikes are well worth a second look.

Essentially Lexmoto models are rebadged Chinese scooters, but the Devon based importer has taken great care to make sure that it only brings in models that are suitable for the needs of British riders – while offering the kind of spares back up that one would expect from a mainstream manufacturer. 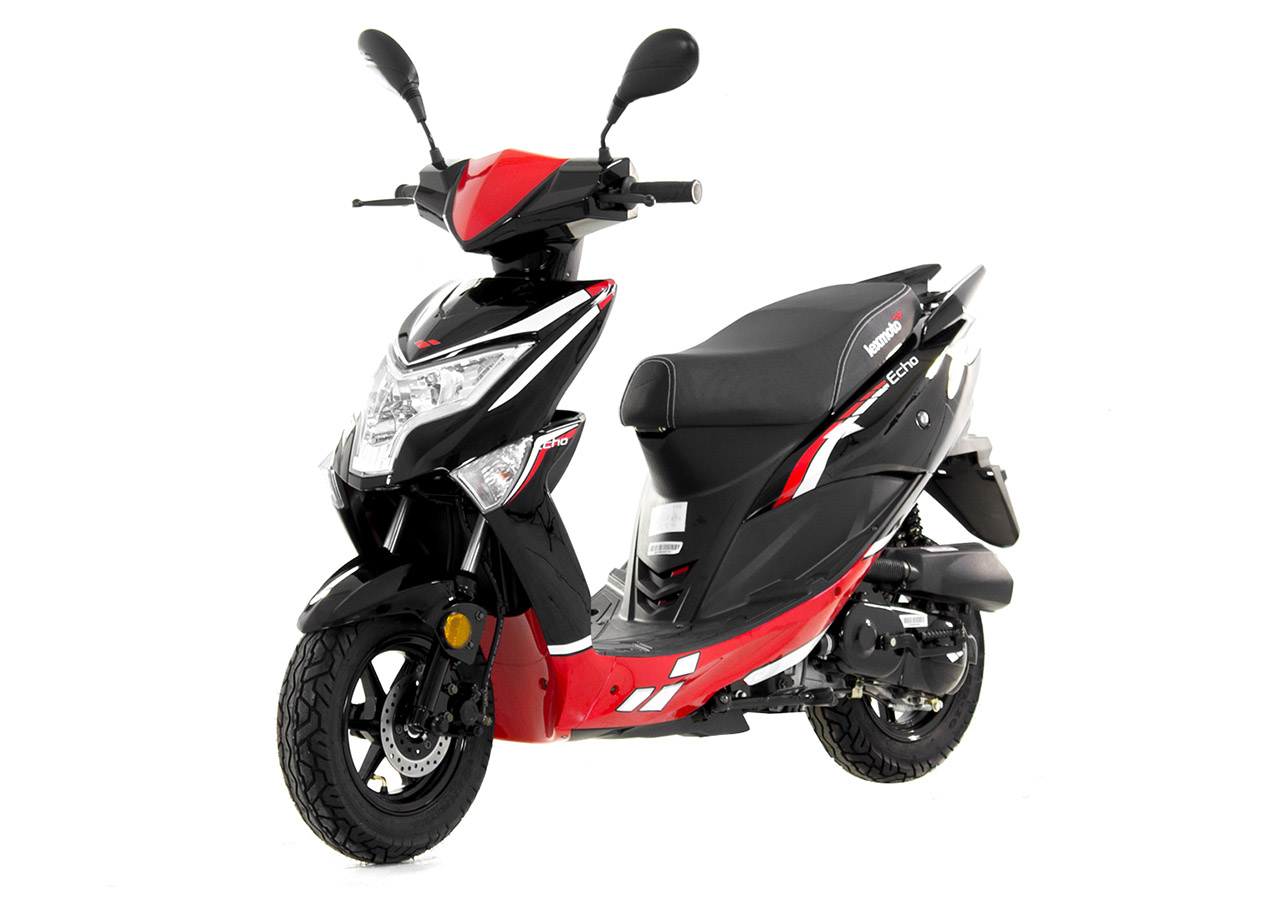 The result is a company that has ridden high in the sales charts for many years now, with products that seem to improve year-on-year.

Our pick is the £1099 Echo. Sure, the spec and build quality isn’t quite up to the more premium brands featured here – but then again it costs half the price of most of them. There are fewer ways to get commute to work.

The little 10” wheels make for a very quick handling bike that is a little nervous on bumpy roads, but the looks are modern and it’s practical too, with a decent storage space under the seat, a fuel gauge and an optional top box for those who need a bit more carrying capability.

The Piaggio group owns three brands with scooters but where Aprilia are the sporty ones, and Vespa the classic retros, the eponymous Piaggio brand represents a no-nonsense, everyday proposition.

In the middle of their three bike 50cc range, price wise, is the Typhoon. It’s got a funky, semi off-road, style not seen since Yamaha’s BW’S with its balloon tyres and quirky style. 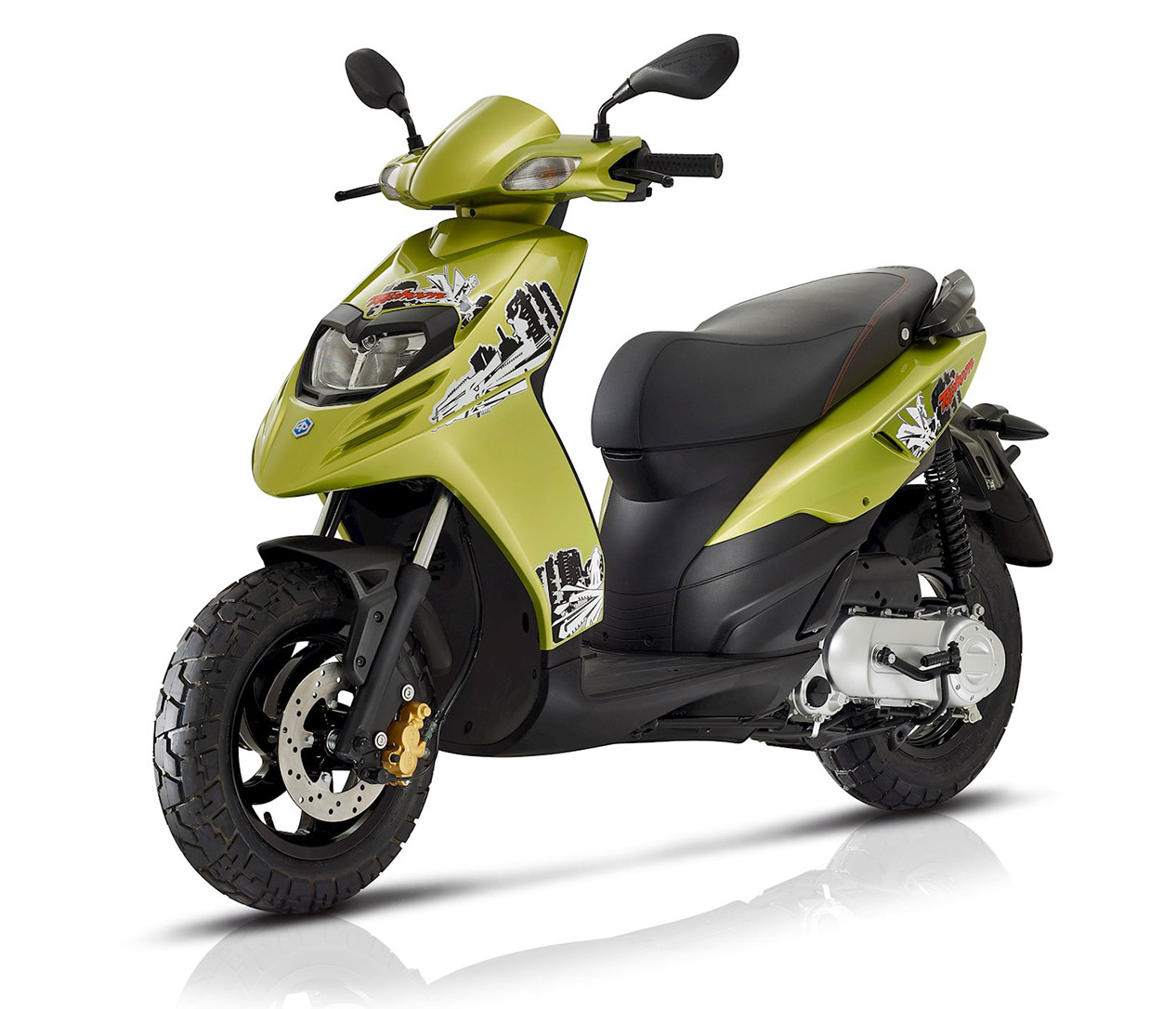 Power comes from an old-school two-stroke that’s now Euro4 compliant. It’s not the typical Italian scoot and has plenty of character for a little guy. £2029.

Kymco is a Taiwanese brand that has steadily built its reputation over the years.

While the company makes geared motorcycles and ATVs, scooters remain the company’s bread and butter. The brand’s 125 and 300cc scoots are right up there with the best (indeed Kawasaki’s J125 and J300 are essentially rebadged Kymcos) and the company has three mopeds in the range, the sporty Super 8, the retro Like 50, and the utilitarian Agility. 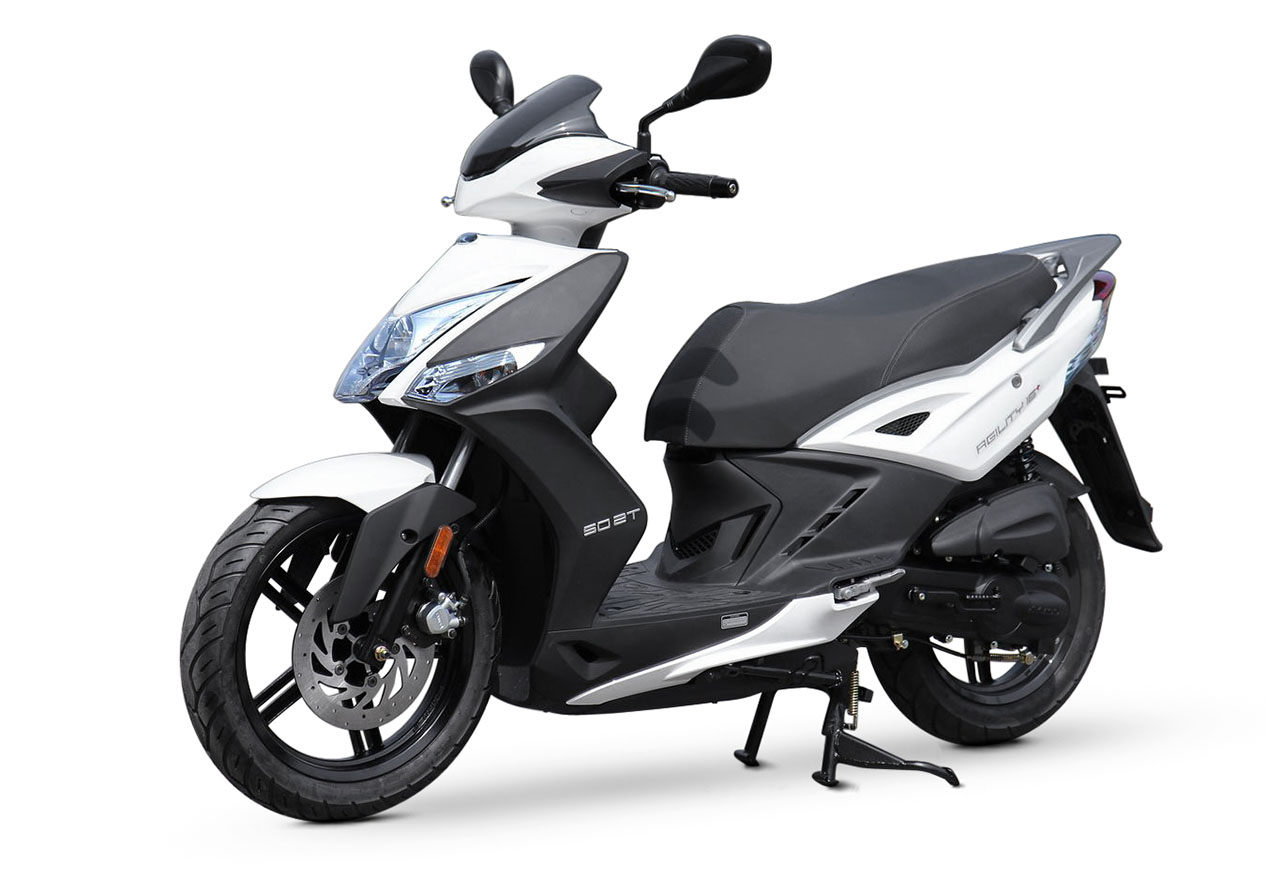 It’s the Agility we’re featuring here, as its just one of those no frills scooters that does what it says on the tin. The basic model can be had for just a few hundred pounds more than a basic Chinese scooter. This comes with 12” wheels, while the City+ model has bigger hoops (16” front and 14” rear) for greater presence and increased stability.

Build quality is right up there with the premium brands and although the name might not mean anything to most buyers, it’s definitely a manufacturer to consider when in the market for a practical and reliable moped.

You want classic? You want traditional? You’ll be wanting a Scomadi, then.

Chances are you’ve never heard of one, but the British owned company (which builds the bikes in Thailand) has created quite a buzz since starting up over 10 years ago. 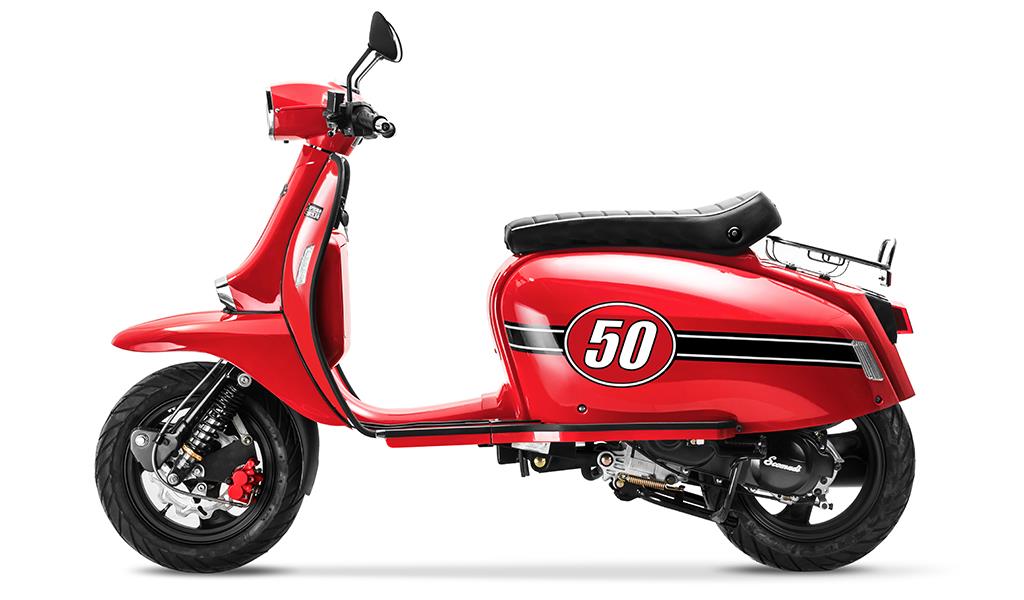 The bikes are the closest you can get to a modern day Lambretta and the TL50 is a traditional steel bodied design with an air-cooled, two-valve four-stroke engine at its heart. Its spirit is truly Italian, with the ‘TL’ in ‘TL50’ standing for Turismo Leggera, or Lightweight Tourer. The Scomadi 50 does employ a novice friendly CVT, or twist and go, transmission, unlike the manual bikes of old. And there’s 125 and 200cc versions for older riders.

The 50 costs £2299, which has undoubtedly helped contribute to the popularity of this quirky modern retro.

Another Taiwanese company, SYM is not that well known in the UK but definitely one to keep an eye on.

The well-established company is a partner of Hyundai, building many cars and trucks for the Korean company. 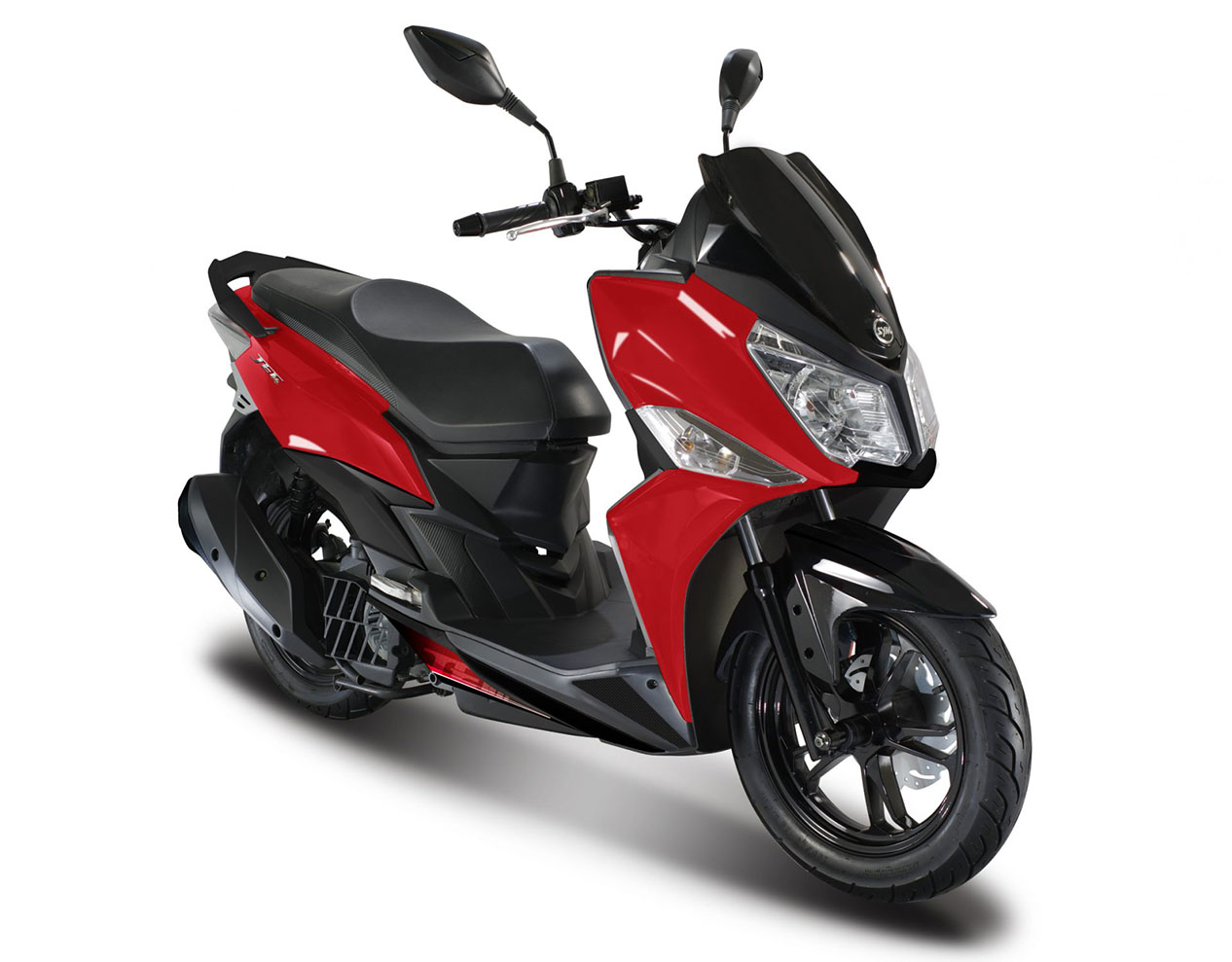 The Jet 50 really catches our eye due to the sophisticated styling, which has more than a touch of Honda Forza or Yamaha XMAX about it. The Jet also comes in 125cc and 200cc variants, which really does give the Jet a bigger bike feel (in no small part due to the 14” wheels from which the Jet 14 derives part of its name).

The spec is good too, with LED headlights and plenty of storage space. There’s a three year warranty too. At £1799, it’s one of the most competitively priced mopeds on the market – and the manufacturer is also offering PCP deals that come in at less than £10 a week.

Get Moped Insurance through Carole Nash