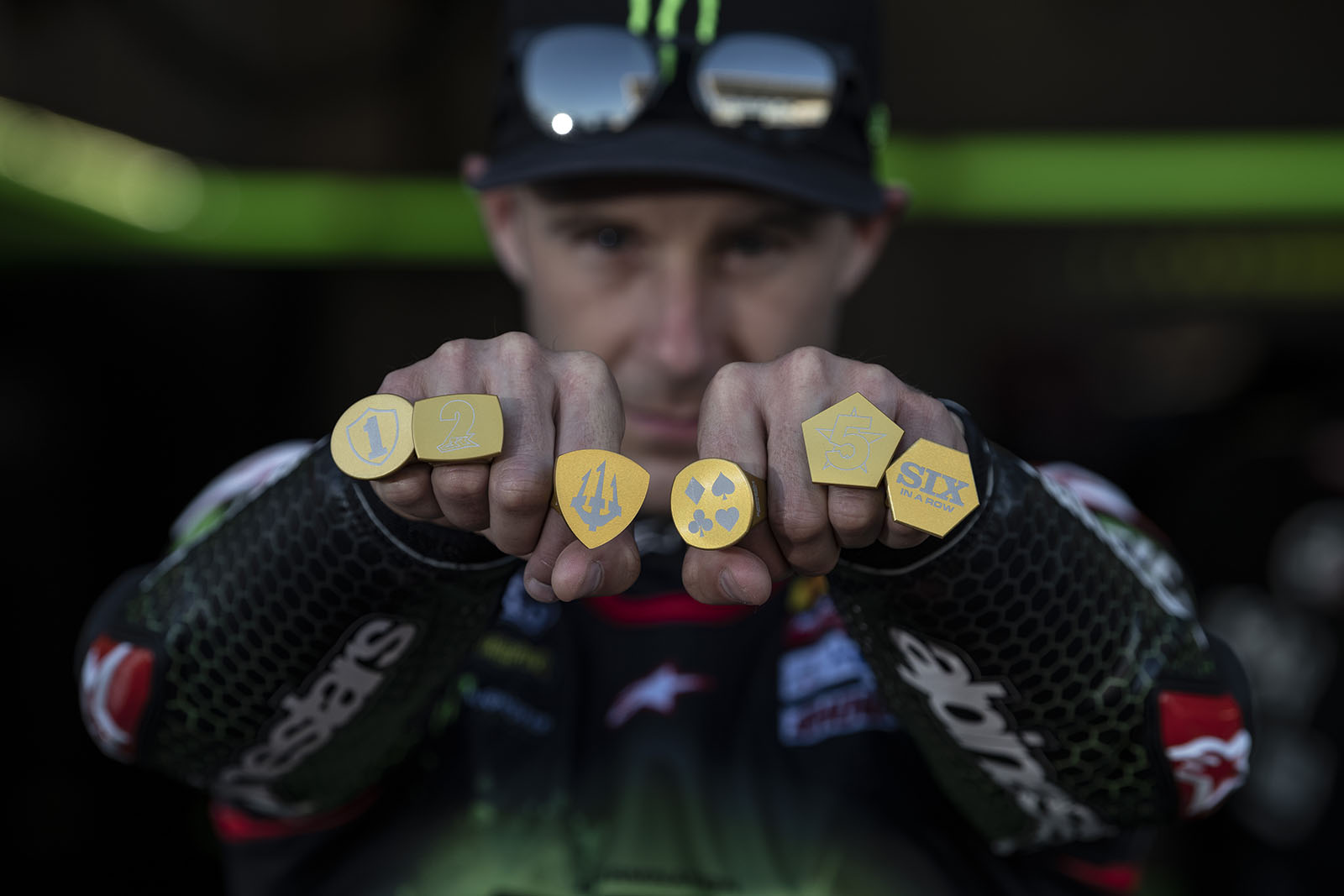 There’s no doubt that 2020 has been a very different year to any that’s gone before it, but in the world of world superbike racing it was very much business as usual for Carole Nash ambassador Jonathan Rea. We caught up with the now six-time world champion less than a week after his latest title to chat about yet another record breaking season.

When the 2020 Superbike World Championship got underway in Australia, on the last weekend of February, few could imagine what lay ahead. The world was only just waking up to the enormity of the coronavirus pandemic but for most it seemed to be a problem taking place far, far away. Two weeks later the Australian Formula One Grand Prix would be cancelled at the last minute due to the crisis and the scale of the situation became clear, but the superbike circus had gone ahead as planned despite the situation running out of control in Italy, where many of the people working in the championship were based.

For Rea, aiming for a sixth successive title in 2020, Phillip Island provided another inauspicious start. The iconic circuit has often served up an unhealthy dose of bad luck and once again this was the case in 2020. A rare crash in race one, as he fought back through the pack after an off track excursion, saw him leave Oz fourth in the standings, despite a win in the Sunday morning Superpole race and second in the afternoon’s full length outing. Little did anyone know at the time, but it would be five months before he and his Kawasaki Racing Team would race again, in a championship that would be like no other before it.

The world title would be decided over a further seven race weekends, compressed into less than three months. The series remained in Europe, in a calendar that bore no resemblance to the one originally planned, with two rounds in Portugal, one in France and four in Spain, including two race weekends back-to-back at Aragon. It was an unusual season but a credit to all who made it happen. And when the lights went out in August the action was enthralling.

JR moved into the championship lead with a perfect weekend at Portimao in round three and remained there until the series concluded in Estoril, however the complexion of the series was different to his five previous successes – and not just because of the Covid complications that saw the enforced mid-season break, an intensive year end and a host of new protocols that saw most races take place without trackside spectators and teams confined to their own ‘bubbles’.

Rea also faced a new set of rivals to see off in 2020. Honda, or more specifically their HRC racing division, joined the championship with the new Fireblade – headed by 2019 runner-up Alvaro Bautista and Leon Haslam, Rea’s 2019 Kawasaki team-mate and 2018 British Superbike Champion. Haslam’s successor as BSB champ, Scott Redding, replaced Bautista at Ducati, forming an all-British pairing with the experienced Chaz Davies, while Yamaha fronted up with a talented pair of youngsters in Turk Toprak Razgatlioglu and Dutchman Michael van der Mark on the improving YZF-R1.

Another former British champion, Alex Lowes, joined Jonathan at the factory Kawasaki Racing Team and it was the Lincolnshire rider who led the series as it left Australia. In one of the most open superbike seasons in many a year, there were a total of seven different race winners – but in the end the Carole Nash-backed man’s sheer consistency proved impossible to beat for his rivals.

Speaking immediately after the final round, Rea told the media: “I have no feeling right now. This season has been an incredible journey and I want to thank WorldSBK, Dorna and all the circuits and organisers to get racing this year. In the middle of what everyone has experienced in 2020, sport always comes second but we managed to race. I missed the fans and not having my friends and family with me, and all my travelling support from back home in Northern Ireland. They could not be here but this (title) is for all of them and my Kawasaki Racing Team. We started behind, like last year, but never gave up. It’s been a hell of a journey and I am so happy.”

We caught up with Jonathan in the days following his sixth title success. As down-to-earth as they come, away from the races he’s the complete opposite of what you might expect a globetrotting superstar to be, juggling our interview between two of the loves of his life, looking after the kids and loading up his Kawasaki motocross bikes in the van.

“It was really hard because I’ve never spent that much time away from my bike before,” he said. “Even when I’ve been injured I’ve been back quicker than during lockdown. It was strange not having a target but, saying that, I really enjoyed the intensity of the championship when it got going again.”

Despite being cooped up at home, Jonathan remained focussed on a racing restart despite not really knowing when, or indeed if, they would be given the green light. He added: “I never really had a target. You’d wake up in the morning and there was no calendar. Normally you’re always working towards a date, for a race or a test, so I threw myself into training pretty hard. I lost a couple of kilos and got pretty addicted to online cycling, together with Jake Dixon. We buddied up and ended up covering a lot of miles together in our online training. It passed quite well and it was nice to get some time away from racing as well. It was enforced leave with the family and it was nice to play dad. I enjoyed the time.”

Action finally begun with a test in Barcelona in July, followed by the resumption of racing behind closed doors on the first weekend of August. “We felt really fortunate,” Jonathan continues. “All around us, the world was at a standstill but we were able to go racing and, luckily we were able to turn a crash in the first race of the season into a really positive year, where we were able to win a sixth world championship.”

Much of the pre-season interest focussed on Redding’s switch to the world superbike scene and in the end he finished the year as runner-up, the only other rider in with a shout of taking the title going to Estoril.

“Scott is a seasoned MotoGP rider,” Rea added. “He came via a season in BSB, where he got up to speed with a superbike and Pirelli tyres. I expected him to be super fast from the off, so it was no surprise to see that he was my main rival. It was a strange season, because there were a lot of race winners compared to the past. There were a variety of different bikes working at a high level, so you always have to be there. You can’t afford to have a bad weekend and be off the podium, because you lose big points. That was the mentality of the year, trying to minimise our bad days and capitalise when we could do well.”

With wins in both main races at the Jerez restart, Redding took briefly led the points standing but, once again, it was the Kawasaki man’s sheer consistency that broke his rivals and he was able to take the crown despite having his worst weekend of the year in the Estoril finale.

He continued: “The target is always to win but there were some weekends we went into thinking they would be more difficult than they turned out to be. Not having expectations is sometimes a positive thing but it is hard because there’s such a winning mentality in this team and the expectation is always very high. It’s hard to sacrifice races to think about the championship and I never did that until the last round of the championship, when it was done and we could afford to take some more chances. We changed the bike a bit more from the Friday morning to the Sunday than usual and we made a huge tyre gamble we probably wouldn’t have done if we were still in a fight for the championship, but it was good fun racing that way.”

And the good news for us, and the bad news for his rivals, is that JR has no plans to hang up his helmet any time soon. Despite having raced in the world superbike paddock since 2008, the champ will still only be 34-years-old when the lights go out on the 2021 season. He remains fit, motivated and loving life as a professional motorcycle racer at the top of his game.

While the ongoing Covid-19 pandemic has meant a delay to next year’s world superbike race calendar being published, Jonathan’s preparation for a seventh season with Kawasaki is already underway. With a number of rider and bike changes among his rivals it promises to be one of the most competitive campaigns in many a year, yet one thing will remain true – Jonathan Rea and his Kawasaki Racing Team will once again be the benchmark they are all aiming at.