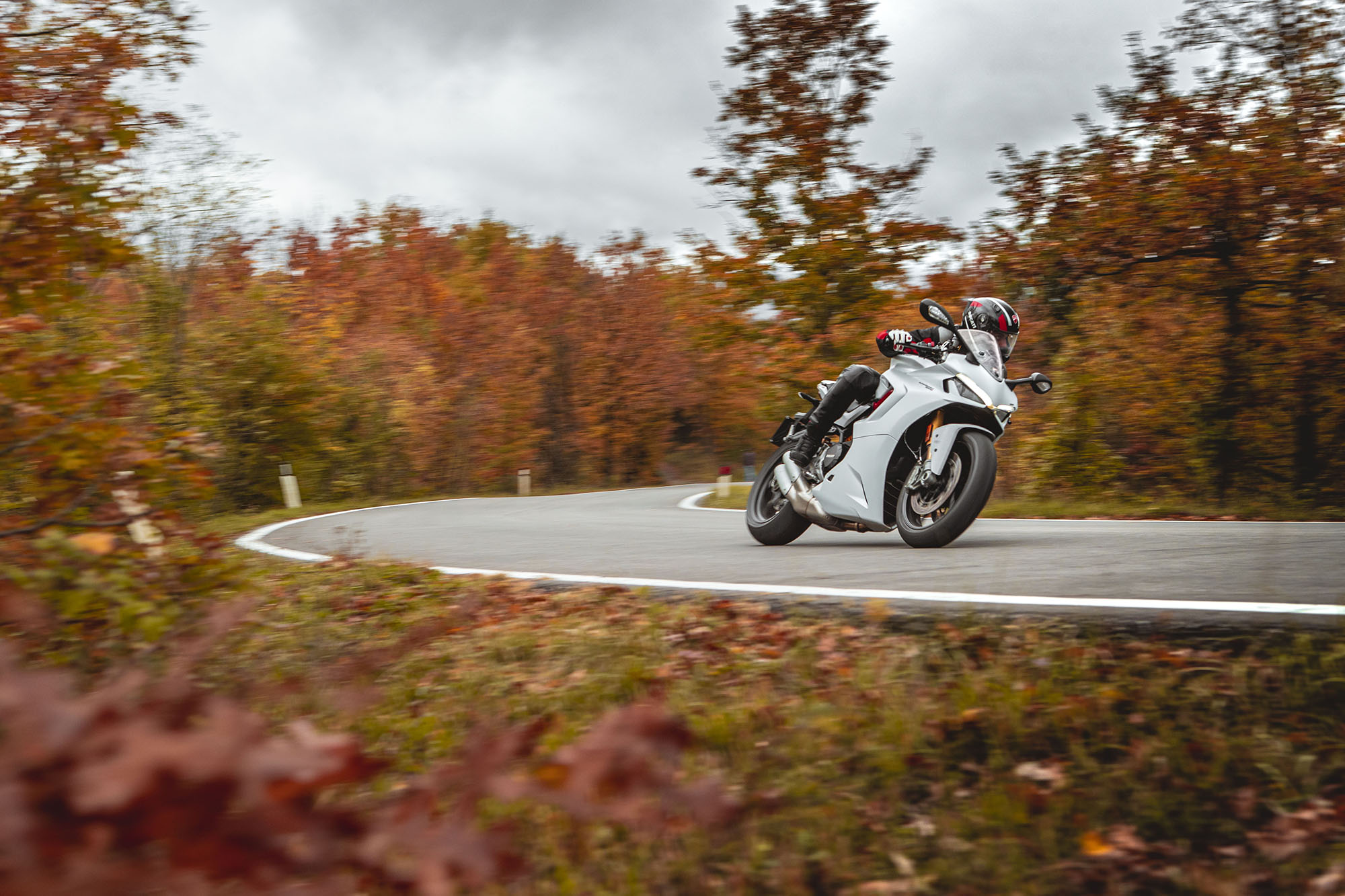 Iconic Italian manufacturer Ducati has given its versatile SuperSport model a makeover for 2021, giving it a sharper new family face and a reworked motor to make it comply with the latest Euro 5 emissions regulations.

Aimed as an alternative to all-rounders like the Honda VFR800F and the Kawasaki Z1000SX, and to riders looking for a sports bike that’s not a race replica, the SuperSport has been an often overlooked model in the Ducati range but remains a steady rather than spectacular seller. Next year’s bike, which will be in dealerships from February, is an evolution rather than a revolution with the main highlight being a new upper fairing and headlight design that takes its inspiration from the Panigale V4 superbike.

The new bodywork certainly gives the SuperSport a sharper and more distinctive look than the first generation models, with full LED headlights flanked by an unusual (though not unattractive) fin and air intake arrangement. With simple but high quality single colour liveries (red or white) and red painted frame, the SuperSport retains a classy look that’s sporty without moving into superbike territory.

The 937cc V-twin motor, shared with the Multistrada and Hypermotard 950 models, is now Euro 5 compliant and has unchanged power figures, 110bhp at 9000rpm and 93Nm of torque at 6500rpm, although the modifications to the 2021 model has seen the SuperSport gain a kilogram, up to 184kg dry or 210kg fuelled up.

Ducati says that improving comfort was a key objective with the latest SuperSport and to that end the seat has been redesigned, with more padding and a new cover, while the electronics package is in line with what would be expected from a high end sports bike.

Based around Bosch’s six-axis IMU, which constantly monitors the bike’s actions, the electronics package includes cornering ABS, advanced traction control, up and down quickshifter and wheelie control, all adjustable through the newly designed 4.3” TFT dashboard, which is similar to that found on the Panigale superbike range.

Chassis-wise, there’s little to distinguish the 2021 SuperSport 950 from earlier models. That means a steel trellis frame with single-sided aluminium swingarm, 43mm upside down forks, Brembo motobloc radial brakes and three spoke alloy wheels shod with Pirelli Diablo Rosso III rubber. As before, an S version will also be available, which replaces the Marzocchi forks and Sachs shock of the base model with fully-adjustable Öhlins units front and rear, including more substantial 48mm units up front.

At the same time as unveiling the new SuperSport, Ducati has also announced a special edition SP (Sport Production) of its Panigale V4 superbike.

Running a livery inspired by those used by race teams during winter testing (matt black fairings with an exposed aluminium fuel tank) the V4 SP is an evolution of the 214bhp V4S and features components from the super-exotic Superleggera V4 model, making the SP a kilogram lighter than the S.

Parts filtering down from the £86,000 limited edition Superleggera include the lightweight five-spoke carbon fibre wheels and Brembo Stylema R front brakes, while there’s also adjustable rear sets, a dry clutch and lightweight 520 pitch chain. Ducati says that the Panigale V4 SP is aimed at track day enthusiasts, albeit wealthy ones as it carries a £32,295 price tag. It’ll be in British showrooms from March, just in time for the start of the track day season.