Kawasaki is expanding its popular retro range with the introduction of a new Z650RS two-cylinder machine for 2022.

Already much anticipated, the Z650 based Z650RS sits between the four-cylinder Z900RS and the W800 in Kawasaki’s modern classic range.

Styling wise, the Z650RS owes more to the 1970s inspired 900 than the more traditional W800, which plays homage to the classic British twins of the 1940s from which Kawasaki drew its early inspiration.

Just like Yamaha’s equally retro XSR700, expect the Z650RS to give a thoroughly modern ride. The chassis and 649cc motor are shared with the standard Z650 (as well as the faired Ninja 650). The water-cooled, eight valve, unit pumps out 69bhp with an A2 restrictor kit available for A2 licence riders. 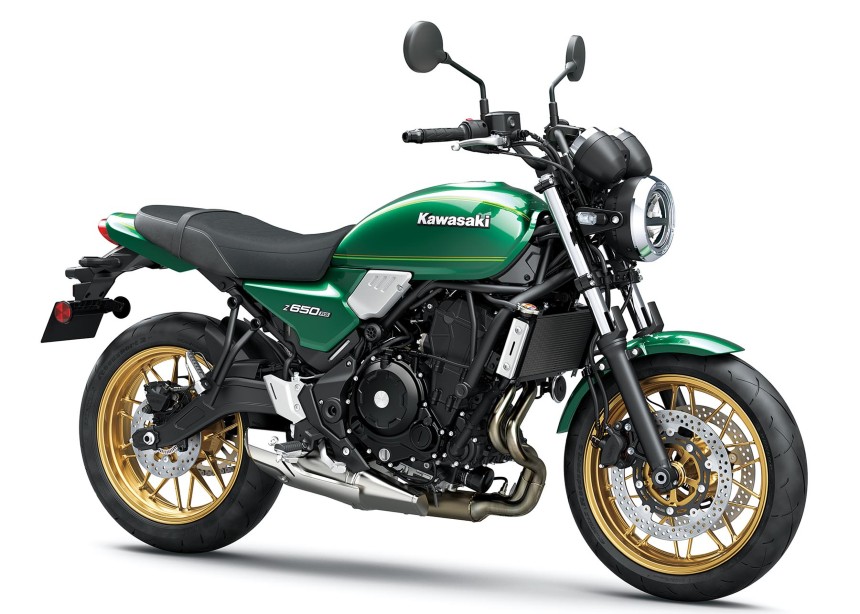 The main differences appear to be cosmetic, with the aggressive futuristic lines of the Z650 replaced by smoother retro curves on the RS, as well as a palette of 1970s inspired paint jobs. Other neat detail touches on the £7699 roadster include the period correct duck tail rear end, pinstriping and some pretty sweet stitching on the saddle.

The plain black version is a little cheaper, at £7549, but it’s hard to see past the Candy Emerald Green option, complete with gold wheels. We’re also a fan of the twin clock set-up and modern/retro circular headlight. The black painted frame creates a much more elegant design than the non-retro RS, which uses liberal amounts of green paint as a design element.

The sumptuous looking saddle gives a seat height of 820mm, 30mm taller than the Z650 upon which it is based, but an accessory seat is available to drop that down to 800mm. Overall it looks very accessible for new riders, with a relatively low weight and the same kind of easy going nature as the donor motorcycle.

Sound like your kind of thing? Your local Kawasaki dealership should be able to hook you up from November.