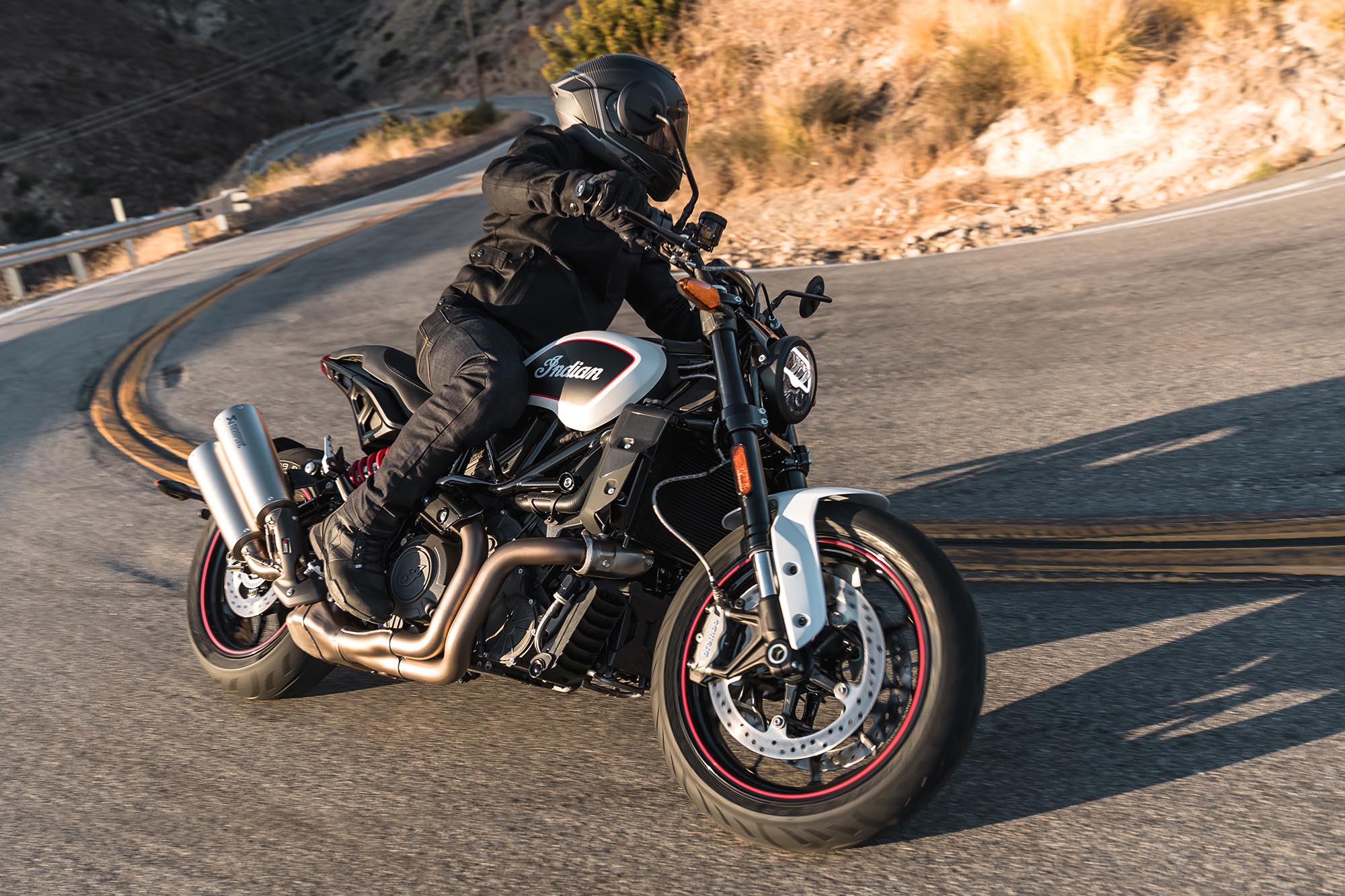 American brand Indian Motorcycle has gone big on the flat track racing scene in recent years, entering a factory team to take on the might of Harley-Davidson on the big oval dirt tracks in its homeland and launching a range of race inspired road bikes, known as the FTR models, to some success. For 2021, the FTR1200 line is getting an injection of new tech and updated styling to further broaden the V-twin’s appeal.

Of course, flat track racing is far removed from day-to-day riding and the FTR1200 models are road bikes through and through, and the changes for 2021 are living proof of that fact.

Where previously the FTR1200 sported a 19” front and 18” rear wheel, shod in semi-knobby rubber, three of the four 2021 models (base, S and R Carbon) now run 17” items front and rear. While the smaller wheels are a move away from the dirt track look, they should offer significantly improved handling and agility on the street. They come fitted with pure road tyres, Metzeler’s excellent Sportec, as standard and make the bike more accessible thanks to a lower seat height. Of course, changing the wheel size is a significant change to a motorcycle and Indian has also changed the suspension and geometry to accommodate the smaller wheels, and to sharpen up the model’s road manners. The more road focussed geometry features a steeper rake angle and a shorter trail and in addition to the 36mm lower seat (down to just 780mm) the tapered aluminium handlebars are also 40mm narrower.

Combined, we would expect these changes to lead to a significantly different riding experience that’s sportier and more planted on the road. For those who still want a more off-road focus, the retro/scrambler FTR Rally runs the 19”/18” spoked wheel combination and knobbly Pirelli Scorpion Rally tyres, and carries a £700 premium over the base model, which costs £12,299.

A few other updates have been made to the FTR1200, albeit ones that can’t be seen by the naked eye. Indian’s cylinder deactivation system, first seen on its big touring models, makes its debut on the range. The system cuts out the rear cylinder when idling, cutting down on emissions and heat transferred to the rider. Electronics have also been tweaked, with a new engine calibration aimed at giving smoother cold starting.

Indian are offering the base and Rally versions with an A2 licence compatible kit, while the S and R Carbon require a full A licence and pack additional spec as standard. At £1400 over the base model, the S features a TFT instrument panel with Bluetooth integration, Akrapovič exhaust system, three ride modes, wheelie control, traction control and cornering ABS, as well as a USB charging point. The R Carbon is the most expensive model in the range, at £15,599, and adds carbon fibre tank covers, mudguard and instrument nacelle, as well as fully-adjustable Öhlins suspension front and rear.