O.M.G. I bought a lemon on eBay (and I’m not too upset about it)

Regular readers might remember my excitement when I wrote about the BMW R1150RT I thought I’d bought for a song. Well, turns out the Bavarian bahnstormer wasn’t quite the bargain I thought it was. In fact, it seems I’ve bought a bit of a banger…

So let’s rewind a bit. One night back in June, as the lockdown started to ease, I made a bit of a drunken eBay purchase. I’d sold my previous motorbike in April, as I realised that I was going to spend the summer working from home – if indeed I managed to keep my job – so when the tax and insurance ran out I moved it on, and retained a hankering for another ‘new’ bike.

That clever algorithm on the internet auction site knows I like to search for old BMWs. I can’t help myself and this time I came across a 2004 R1150RT in silver, advertised with less than 48,000 miles on the clock. I liked the look of it and thought it’d go for around £2500, so didn’t think about it again until my phone alert pinged to tell me that there were only a few hours left to bid. What’s more, it was only down at £1500. I was interested!

That clever algorithm on the internet auction site knows I like to search for old BMWs. I can’t help myself and this time I came across a 2004 R1150RT in silver, advertised with less than 48,000 miles on the clock. I liked the look of it and thought it’d go for around £2500, so didn’t think about it again until my phone alert pinged to tell me that there were only a few hours left to bid. What’s more, it was only down at £1500. I was interested! 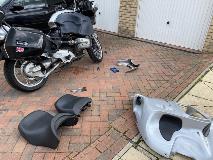 So this is a lesson in how not to buy a motorcycle. Internet auctions can be a brilliant way to buy or sell a motorcycle, but they can be a minefield too. It’s never wise to purchase a bike without going to see it first, but if you do want to take a gamble, you should at least have a chat with the seller and run an MoT check through the Government’s website (https://www.gov.uk/check-mot-history) which will show you the mileage when presented for testing, whether or not it passed or failed and details of any advisories.

Of course, I did none of this, but I did win the auction for £1800. And I was delighted to have scored what I thought was a real bargain as I sorted out my insurance and booked a train ticket to Derby to go pick it up. 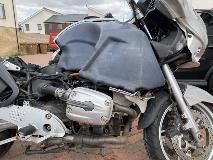 To be fair, first impressions were reasonable. Some of the nuts and bolts looked a bit corroded, but the fairings and hard luggage are top notch. Some alarm bells rang when the seller confirmed he’d only had it for a month, but his story that he mainly rode classic bikes and didn’t really get on with it (allied to the fact that he realised he wouldn’t be able to go touring in Covid Britain) seemed legit enough. The ride home was fair too, although the handling was a bit off thanks to the seriously squared off rear tyre.

It was only when we returned home that I realised that all was not exactly as advertised.

That doesn’t bother me unnecessarily, I’d have just like to have known. The bike comes with a service book and receipts for recent years. The service book shows it was supplied by a London dealer but after that the first five years are a mystery. It then gets main dealer serviced for a further five years, before it appears to drop its mileage (this too is documented in the service book, although no reasons are given). Invoices and documents suggest that it has been well enough looked after since, though why there is a mileage discrepancy remains a mystery.

I have my theories. I tracked down the previous plus one owner, who clearly purchased it after the mileage reversal, to see if he knew anything about the bike’s past. He was fastidious in his record keeping, although he hasn’t responded to my message through Facebook.

What I think, and I can only assume, is that this particular motorbike started out as a police motorcycle. These were standard fare for the Metropolitan Police in 2004, especially in silver. BMW did make police spec RTs, most notable for their single seat units and narrower panniers, although my research suggests that many of the Met bikes had the standard civilian panniers too. These police bikes also have different speedos, which are calibrated in order to prosecute speeding drivers, so it’s not inconceivable that the clocks have been changed to standard spec units five years ago.

The police scenario would go some way to suggest why there are no service stamps in the handbook for the first five years of ownership, as the force would do its own servicing in house, and also the good condition of the bodywork. The plastics are in fine fettle for a 100k mile motorway tourer, but if it spent half of that covered in police decals it’s hardly surprising that it’s in such good shape. Whatever the back story, I’m not too upset though. The bike has been well looked after in recent years and that’s been well documented. At the end of the day I’ve got a fully running and MoTed motorcycle for less than £2000. Hopefully it’ll see me through the winter, and unless it proves to be a proper lemon I will show it a bit of love in the spring and head up to Scotland for that much anticipated tour in the summer.

With its chequered history, the bike’s unlikely to be able to be worth any more than I paid for it which means that lavishing lots of money on it is out of the question, and any major repairs may not be economically viable.

Those repairs have already started coming in, and I have bought myself a Haynes manual to try and take on the jobs myself. A few weeks into ownership I noticed that the bike seemed to be misfiring on a soaking wet day. That turned out to be some perished fuel lines, which announced themselves by squirting fresh unleaded on the garage floor the next time I switched the ignition on, and these were easy enough to change. Indeed the big BMW is a fairly simple bike to work on, once you’ve removed that massive fairing and its numerous screws. Underneath, the bike is dominated by the huge, 25 litre fuel tank. That made getting in to undo the old fuel line, and in particular fitting the new one, a bit of a schlep, but not overly difficult. I kept the fairing off for a few days after changing the lines, just in case there was still a leak, as the biggest part of the job was removing and refitting the bodywork. I think it looked quite Mad Max without its clothes on.

The other urgent job was replacing the rear tyre. Originally I was going to invest in a new set front and rear, but in light of the bike’s sketchy past I then looked at just making a like for like change with a budget Maxxis at the rear, as there was plenty of life in the matching front. As it is was, my local bike shops couldn’t really make time for a cheap tyre change (I guess there’s not much margin to be made) and a pair of mail order Metzeler Interact Z8s weren’t much more expensive. As a few guys in the office were all in the same boat, we booked a mobile tyre fitter for the day and split the costs. In the end, I’m glad that I did because with new boots on the BMW is transformed. There’s still a little play in the Telelever front end though, so that’s on my list of DIY winter jobs to sort out.

So while my bargain bike isn’t quite what it appeared to be, I’m still pretty cool with it. As I am working from home when I can and trying to avoid any unnecessary travel, I haven’t been doing all that many miles on the big tourer. That said, I have been using it whenever I do need to travel and have clocked up the best part of 1000 miles so far. It always takes me a while to ‘trust’ older motorcycles and after realising its mysterious past and uncovering the problems with the fuel lines, I wouldn’t exactly say that it’s inspiring confidence yet. But the more I ride the RT the more I feel sure that it can give me good, reliable service over the next 18 months or so. And that, from a sub-£2000 motorcycle, is all I am looking for.