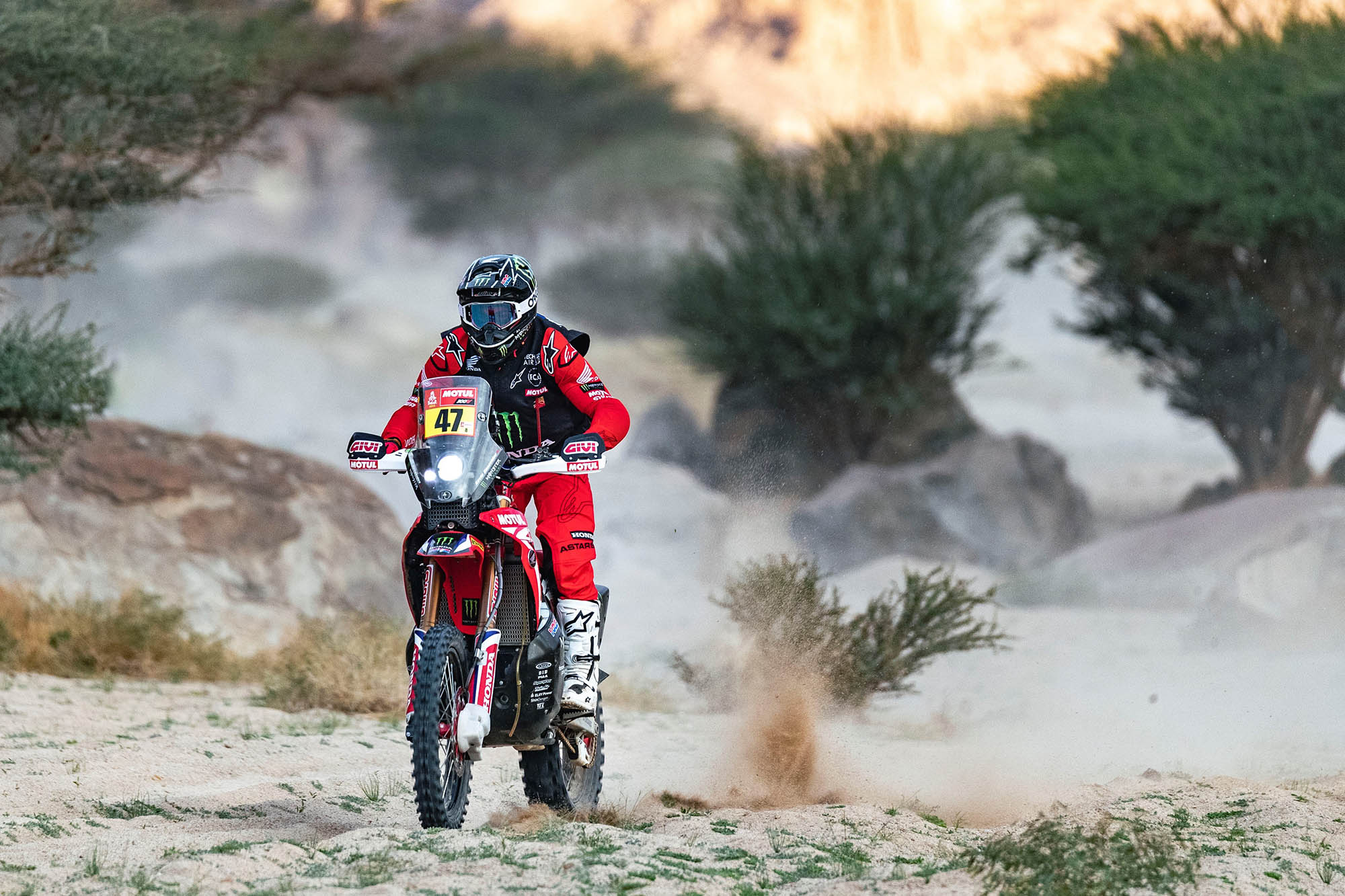 Argentinean Honda rider Kevin Benavides gave Honda victory in the 2021 edition of the gruelling Dakar Rally, the Japanese manufacturer’s second win in as many years.

Having visited the Kingdom for the first time in 2020, this year’s event was once again held in Saudi Arabia, with a wide open field among the motorcycling competitors in what is surely the world’s most challenging motorbike race.

Setting off on January 3, Covid-19 restrictions meant that the 2021 rally stayed entirely within Saudi Arabia for its whole 14 days. The 13 stages covered over 4700 miles, with Benavides winning on two days to take the overall win from team-mate, and last year’s winner, American Ricky Brabec by almost five minutes. Brabec won the prologue and three main stages during the event, with a third Honda rider – Spain’s Joan Barreda – also taking three stage wins but failing to mount a challenge for the overall win after running into navigation problems on stage five and then running out of fuel on stage 11.

“The final stage of this Dakar 2021 was very difficult,” said Benavides. “I started third (on the last stage) so I thought that it would be easier, but it was not like that. At kilometer 50 all the riders in front got lost, so I began to open the track. The stage has been very difficult to navigate so I stayed very focused on doing things well. I gave everything to achieve this win which is a dream come true for me. I am very happy and thrilled about it. I crossed the finish-line thinking about many things, with great emotions, Paulo Gonçalves (Portuguese rider killed at last year’s event) also crossed with me. It was a great moment. I am really pleased and I’m living this moment. I want to thank the whole team, starting with my mechanics, for the great job they have all done this difficult year. Thanks also to Honda for giving us such a great bike which made it possible to achieve the dream.”

With 18 consecutive wins ahead of the 2020 edition, KTM were desperate to regain the title lost to Honda last year. They looked to be in good shape, with 33-year-old Australian rider Toby Price leading on one of the orange bikes at the halfway point. The popular Queenslander had finished second in stage eight on a rear tyre lashed together using cable ties but, the following day, on a properly repaired bike he crashed out and was airlifted to hospital with injuries to his left arm and shoulder.

Britain’s Sam Sunderland, the 2017 winner, was another KTM hopeful and finished third overall, winning the penultimate stage. “I did my best over the whole rally so I can’t be too disappointed,” said the 31-year-old Brit. “I had to push hard to make up those minutes I’m super happy as I know I gave it my all. The other guys did a great job and after what was such a tough event with several crashes and people being forced to retire with technical issues, I’m glad to be here safe at the finish line and in third place. I honestly think that has been one of the toughest races I have ever done – the pace at the top is so high, we’re having to fight every single day and there is no time to relax. Congratulations to all those who finished and get well soon to those who crashed out.”

A notable debutant at this year’s event was enduro legend David Knight. The 42-year-old from the Isle of Man is a five-time enduro world champion achieved what every Dakar rookie dreams of and made it to the finish line but, unsurprisingly, ‘Knighter’ made a big impression as he built up speed throughout the fortnight. From running in the top 40 in the early stages, the Ballaugh man scored a best stage finish of 19th on stage nine and claimed 24th in the final standings, quite an achievement considering his effort had been crowdfunded, following the late withdrawal of a sponsor.

“We made it!” he said on his daily YouTube vlog. “When you see that finish line come into sight there is just a massive mix of emotions. To get to the finish was the aim, to repay everyone who put their faith in me, it means more than anyone will ever know. My whole life for the past six months has been about getting here. The past two weeks have been about coming in off the stage, preparing my equipment for the next day before getting straight to bed at 8.30 and up again at 3.30 in the morning to start riding again. It wasn’t easy but finishing was one of best moments of my life.”

There was one other British motorbike finisher in Dakar 2021, with 37-year-old privateer Neil Hawker finishing 37th on his second attempt at the rally. This year’s event also has one fatality, with French Pierre Cherpin, 52, passing away as a result of injuries sustained in a stage seven crash.