It’s been years in the making, but Harley-Davidson’s new Pan America 1250 adventure bike will be in showrooms in the next few months. And if the spec sheets translate into the real world, the all-American challenger to this hotly contested class may well prove to be a thorn in the side to BMW’s dominant R1250GS.

Harley-Davidson has been very open about diversifying its product range and announced the Pan America along with several other planned new models, including the Yamaha MT-09 challenging Bronx, in 2018. And while the Bronx looks to have fallen by the wayside, the Pan America 1250 will be on British roads by this summer.

Cynics may have sniggered at the thought of an adventure touring bike from the most traditional of cruiser manufacturers, but the Motor Company may well have the last laugh. They’ve revealed the final specifications and they suggest a machine that should be a match for the class leading GS, never mind competitors like the Triumph Tiger 1200 and Yamaha’s Super Tenere.

And while most manufacturers have tried to muscle in on Harley’s dominance in the custom/cruiser sector, the American brand had previously remained (with a few limited diversions, most notably the VR1000 superbike of 1994) loyal to its traditionally styled and engineered machines. The Pan America is a ground up new design and, barring a few H-D traditions, may well pull in new riders to the brand, ones who would never had considered owning a Harley before. 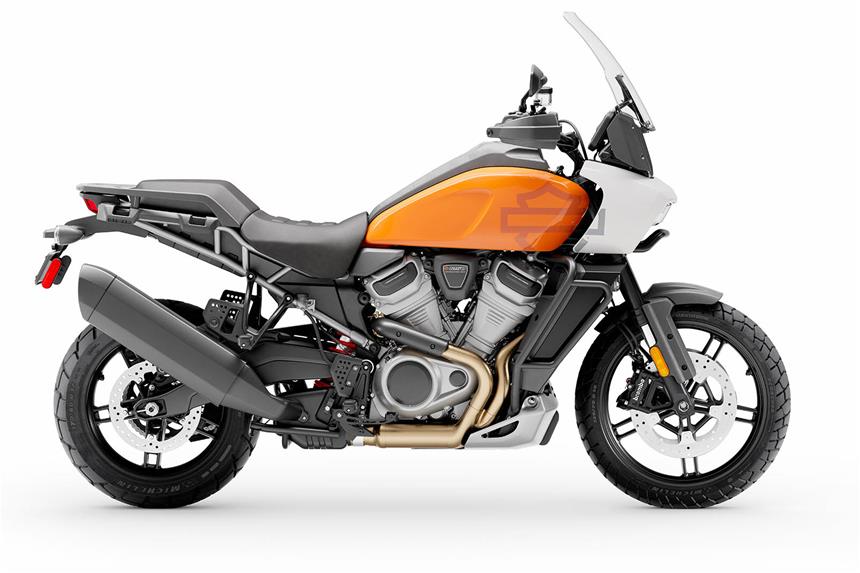 Traditionally Harley-Davidson have shied away from declaring power outputs, focussing more on torque and characteristics, but the so-called ‘Revolution Max’ unit is at the cutting edge and this time they’re happy to shout it from the rooftops. The headline figure is the all-new short-stroke V-twin engine, producing a claimed 145bhp – more than 10bhp up on its German rival – and the technology includes variable valve timing, which allows the motor to be tuned for a beefy mid range without sacrificing top end power.

The tech also includes the latest levels of electronics, inline with competitors, which features five pre-programmed riding modes and the ability for the rider to create their own custom mode using their own preferred parameters. Other electronic aids include cornering ABS and corner sensitive traction control. A 6.8” TFT dashboard presents the information, with Bluetooth connectivity for the Infotainment system.

Indeed, take the spec sheet alone and the Pan America could come from any mainstream motorcycle manufacturer. The styling is distinctive, especially the headlight, and the chassis follows the class norm with a 19” front and 17” wheel, shod with Michelin tyres, although only cast alloy wheels are available at launch.

That new engine is used as a stressed member, which saves weight, and the chassis has been designed to bolt together in sections, meaning that it can be easily repaired should it take knocks when ridden off-road. That ability to be ridden on the rough stuff can also be seen by the decision to adopt a tough chain final drive, a departure from Harley’s normal but more fragile belt and the heavier shaft drive seen on the GS and Tiger 1200.

The result is a wet weight of 245kg, a little lighter than its German rival, but of course the proof of the pudding will be in the riding and Harley-Davidson is bigging up its new model, although we’ll have to wait a few weeks to see how it performs against its rivals.

Two models will be available at launch and while the base version is already well specified, the Pan America Special adds electronic suspension and a unique adaptive ride height system, which lowers the bike at standstill. Pricing is also very competitive, starting at £14,000.