Exploring Scotland on a KTM 790 Adventure

With big European motorcycle tours unlikely to be on the cards in 2021, as the world continues to deal with the Coronavirus pandemic, veteran motorbike journalist Chris Moss shares one of his favourite biking holidays on the British Isles with us…

Riding in Scotland is hard to beat. I’ve enjoyed it on several occasions but all my visits have been fairly brief affairs and over too soon. This trip though, lasting over five days, let me appreciate this fantastic nation a whole lot more.

There was a very basic, albeit still pretty loose, plan. Three of us would ride from Manchester, head to Glasgow on the motorway, take the Gourock to Dunoon ferry and then go with the mood. I’ve ridden with my mates ‘Azzy and Shaun many times before and expected the trip would be great fun. It turned out to be one of the best road tours I’ve been on. My companion for the trip would be a KTM 790 Adventure – an often overlooked contender in the middleweight adventure bike class

Miles spent on the M6 and M74 motorways were hardly what you’d call fascinating, but they did let us make very good progress. The weather was a little changeable, but dependence on my KTM stayed constant. Its protective fairing kept me dry and reduced fatigue. The seat keeps my bum content, and just as usefully, the tank lets me do 200 miles or more between refills. I’d discover many more of its touring virtues in the miles to come.

Rolling off the ferry in Dunoon, the main town on the Cowal peninsula, it quickly became evident we’d arrived in the Scottish Highlands. Majestic landscapes constantly greet the eyes and with empty, winding and undulating roads to take you through said splendour, it’s hard not to be happy. That contentment continued over dinner and drinks into the night. We hatched a plan to get to Melvich, right up on the north coast, the following day. With an eight hour ride ahead of us, it wasn’t a late one.

That journey brought more regular gasps of amazement thanks to incredible views and brilliant routes. Scotland, I’m reminded, is one hell of a place to ride a motorcycle. Both the twisting routes of the A83 and A82 gave me a chance to enjoy the KTM all the more. Its parallel twin motor has plenty of pep if you wind it up a bit. But the beauty of it is, it doesn't need lots of revs to deliver good, strong drive. Allied to the agile, predictable handling and overall commendable balance, it made light work of navigating the area's unfamiliar territory. Given the smoothness of the engine, lovely steering, reliable brakes, and aforementioned excellent shelter from the fairing and screen, it’s easy to see the KTM’s potential at covering big miles capably. 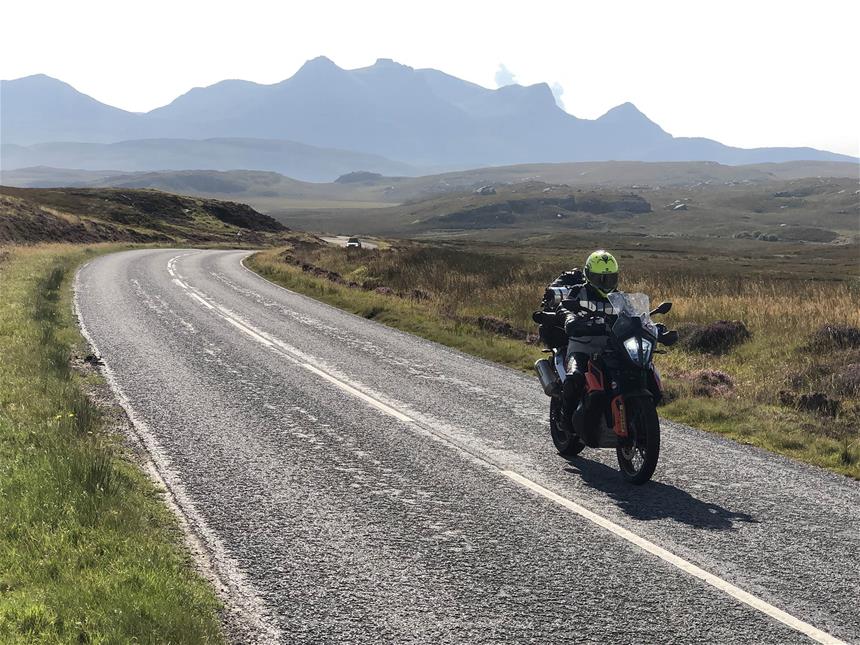 Tighter back roads took us to the campsite near Melvich where we spent the night in a fairly basic, but perfectly adequate ‘pod’. Over too much alcohol, following some general conversation about the place, we decided we’d take to the seas once more tomorrow, to visit the island of Orkney. Despite there being much to learn from the place, especially its connection with Second World War naval history around Scapa Flow, and utterly spectacular coastline, we chose to return to the mainland’s attraction that evening. Thurso saw us arrive, demolish several Indian curries and Belgian beers, sleep, and depart within what seemed like just a few hours.

Day three brought plenty of adventure, more miles and a humorous (for some at least) end to the day. The ride on the fabled North Coast 500 route along the north coast was a little busier with traffic, though rewarding all the same. But the laughs came when we decided to wild camp next to a Loch near Lochinver. Pitched close to the water the chuckles began when, after a hearty fireside dinner and beers, ‘Azzy noted my tent seemed very close to the water’s edge. The good reason for his accurate observation was because the Loch was tidal, with its water now near to lapping against my home for night! Having to re-site it in a hurry while worse for wear isn’t something I want to repeat.

More frequent jaw-dropping came the following morning from witnessing the staggering scale of the natural architecture along the NC500 route to Ullapool, and then on to the heights of Applecross Pass and its phenomenal, panoramic vistas. Then it was on to an equally phenomenally poor value hotel on the Isle of Skye. We were compensated well the next day though, with a spot of amusing confusion after a long but rewarding run down to the Mull of Kintyre. Ready for a break from riding, we went online to successfully book into a ‘nearby’ hotel. Trouble is, the sat nav then revealed it was actually another 85 miles away!  Fortunately, a few drinks after a tasty, if very late meal helped us see the funny side.

It was our last night in the great nation, as we soon boarded the Dunoon ferry to head for home the next day. A visit to the Lake District with a ride over the challenging Hardknott Pass softened the blow, as did some camping in Cumbria that evening – even if it did pour down. The deluge still couldn’t dilute the enormous pleasure we all got from the trip. I pretty much enjoyed each and every moment of it, and can’t wait to go back.