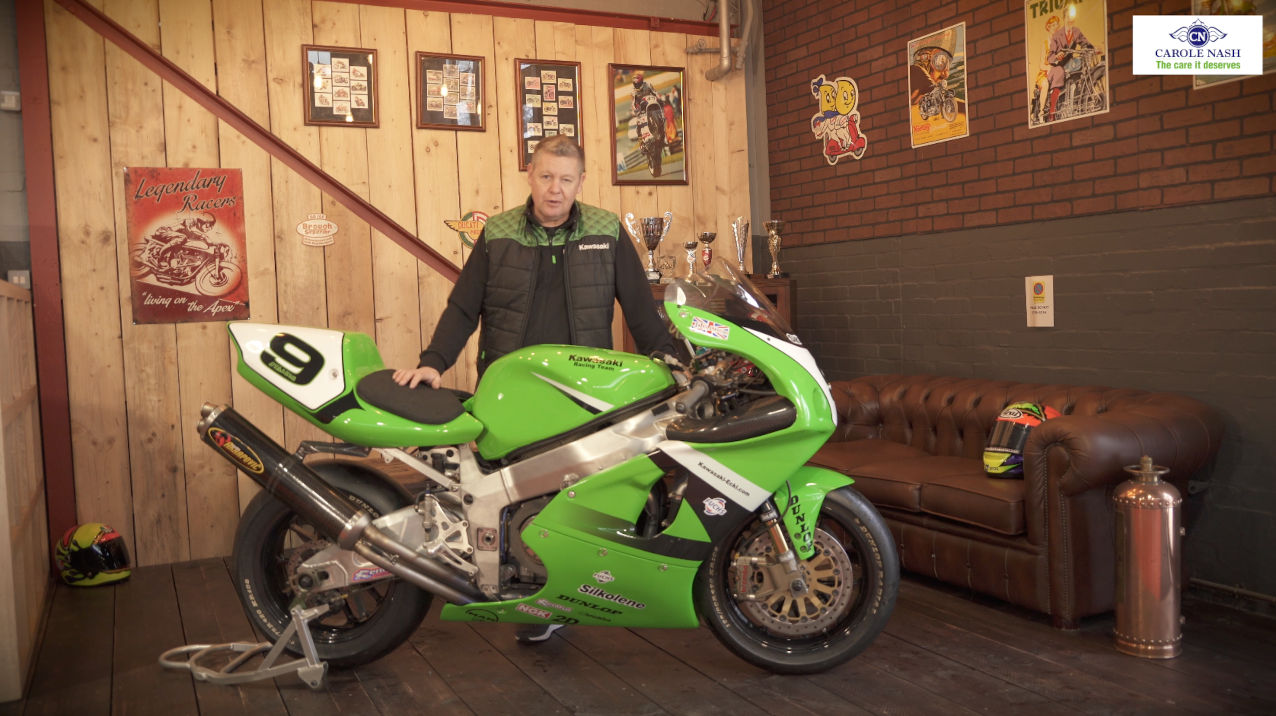 Every British Superbike fan knows Chris 'Stalker' Walker. For the best part of four decades Chris has been one of the best known faces of British racing and although he famously never won a championship (finishing runner-up four times in a row between 1997 and 2000), he was and still is a very firm favourite of the fans.

Chris’ battle with Neil Hodgson for the 2000 British superbike crown is the stuff of legend, with a staggering season that saw the pair knock ten bells out of each other at every round. Hodgson won the title at the last race, when Walker’s bike broke down. The scenes of his Suzuki billowing smoke and Chris making a tearful walk back to the pits remains one of the most famous moments in British racing history, and reinforced the position ‘Stalker’ held as the people’s champion. After BSB, he would go on to race on the world stage – taking on a season in 500cc Grands Prix before moving to world superbikes, where he won a round at Assen in 2006.

Now Chris has retired from racing he no longer gets bums on seats at race meetings. Instead, de gets bums on bikes at his motorcycle dealership, Chris Walker Kawasaki, where we met him to have a chat through his impressive collection of motorcycles and racing memorabilia.

Walker rode for all of the Japanese manufacturers in his racing career, as well as Ducati, but it is with Team Green that he is most closely associated, so it’s no wonder that he’s become a Kawasaki dealer.

The shop provides a real trip down memory lane for fans of the brand and you can tell that this is not an ordinary dealership by the plethora of old factory race leathers hanging on the wall and a collection of machinery that includes iconic classic motorbikes and trick factory racers, which should be on everyone’s dream garage list.

We met with Chris to talk us through the bikes he holds closest to his heart and the stories behind them. In part one of our video, he starts us off with one of the first bikes to come through the door of the dealership. As a kid he always lusted over the Kawasaki 750 Triple, the Mach IV, and he finally got his hands on one. The formidable two-stroke triple had a such a reputation for being dangerous that Kawasaki made a few ‘tweaks’ to it before releasing an updated version.

As well as the Mach IV, Chris walks and talks us through the Yamaha FS1E he lusted after as a schoolboy. He bunked off school to go for a ride on the day he was old enough to ‘legally’ ride it, before clocking up serious mileage over the winter months.

In part two, Chris takes a very sentimental turn when he talks us through the last bike his father sold as a motorcycle dealer. It’s a cracking tale of how Chris took possession of the Kawasaki ZXR400, and it will certainly make you realise why this particular bike is so precious to Chris.

The Kawasaki ZX-7RR that takes pride of place on the showroom floor is probably the bike with which Chris is most closely associated. It’s the full factory superbike he rode to ninth in the 2002 world superbike championship, when he was the top 750cc rider in a field dominated by 1000cc twins. It’s a one of a kind and irreplaceable, which is why Chris has it front and centre in his dealership.

Finally, Chris talks us through the bike he achieved 100mph on at the tender age of three years old! Watch the video for the full story!

As a racer, Chris always enjoyed a reputation for being very friendly and for always having time for his fans, so it’s no surprise that he hasn’t changed a bit now he’s a dealer principal. You’ll find him in the shop most days (they also sell Indians and have a very cool café, BTW) and is still always happy to talk about anything related with bikes, not just racing.

All of the bikes in the videos can be seen at Chris Walker Kawasaki in Grantham, Lincolnshire, so if you’re in the area why not drop by for a brew and enjoy some of the best classic Kawasaki motorbikes in the country.