BSA is back with all-new Gold Star 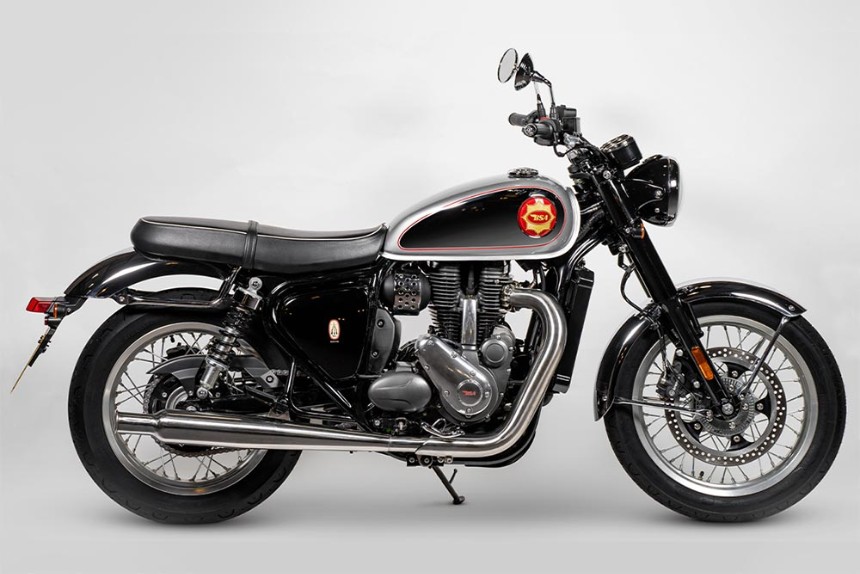 One of Britain’s most iconic motorcycle brands, BSA, is set to return in 2022 with a new bike wearing the famous Gold Star name.

Rights to the BSA name were purchased by India’s massive Mahindra organisation in late 2016 and the first fruits of the new company is currently being shown at Motorcycle Live in Birmingham, BSA’s spiritual home.

The new 652cc single is an authentic-looking machine in the style of Royal Enfield’s Interceptor 650, another Indian-led reboot of a classic British brand. Power is claimed at 45bhp, making it A2 compliant, and although the engine is water-cooled, a combination of a discretely mounted radiator and heavy finning on the engine give it that traditional air-cooled look.

Styling-wise, the new BSA company appeared to have nailed it. The Gold Star, more of a race bike than a roadster, was by far the original BSA’s most famous nameplate and reviving it for the comeback represents a bold move. It’s an unashamed reproduction of the classic 1950s Brit bike, although it enjoys thoroughly modern engineering and some 21st century touches like the compulsory ABS brakes, USB charging socket and LED readouts inside the otherwise very traditional looking twin chrome clocks.

Otherwise, the Gold Star, which is expected to go on sale in Spring, looks like it’s just rolled out of the British industry’s Golden Era – witness the spoked wheels (18” at the front and 17” at the rear), twin shocks (five-way adjustable for preload) and the classic flat bench seat design (with a claimed seat height of 780mm).

Although basic, cycle parts look to be of decent quality with Brembo providing two-pot callipers to grip the single 320mm front brake disc and Pirelli’s Phantom Sportscomp tyres keeping everything in check. Two versions will be available, with a shinier ‘Legacy’ version alongside the standard model.

The Legacy is even more reminiscent of the Goldie’s glory days, with its chromed up fuel tank, polished engine cases and white trimming on the bench seat. There’s no word on pricing yet, but we’re expecting BSA to join Royal Enfield in delivering a big value proposition.

Although the Gold Star is currently manufactured in India, the company has confirmed that it is looking for production facilities in the UK. The company does have R&D facilities in Coventry and is reported to be working on a range of electric motorcycles.