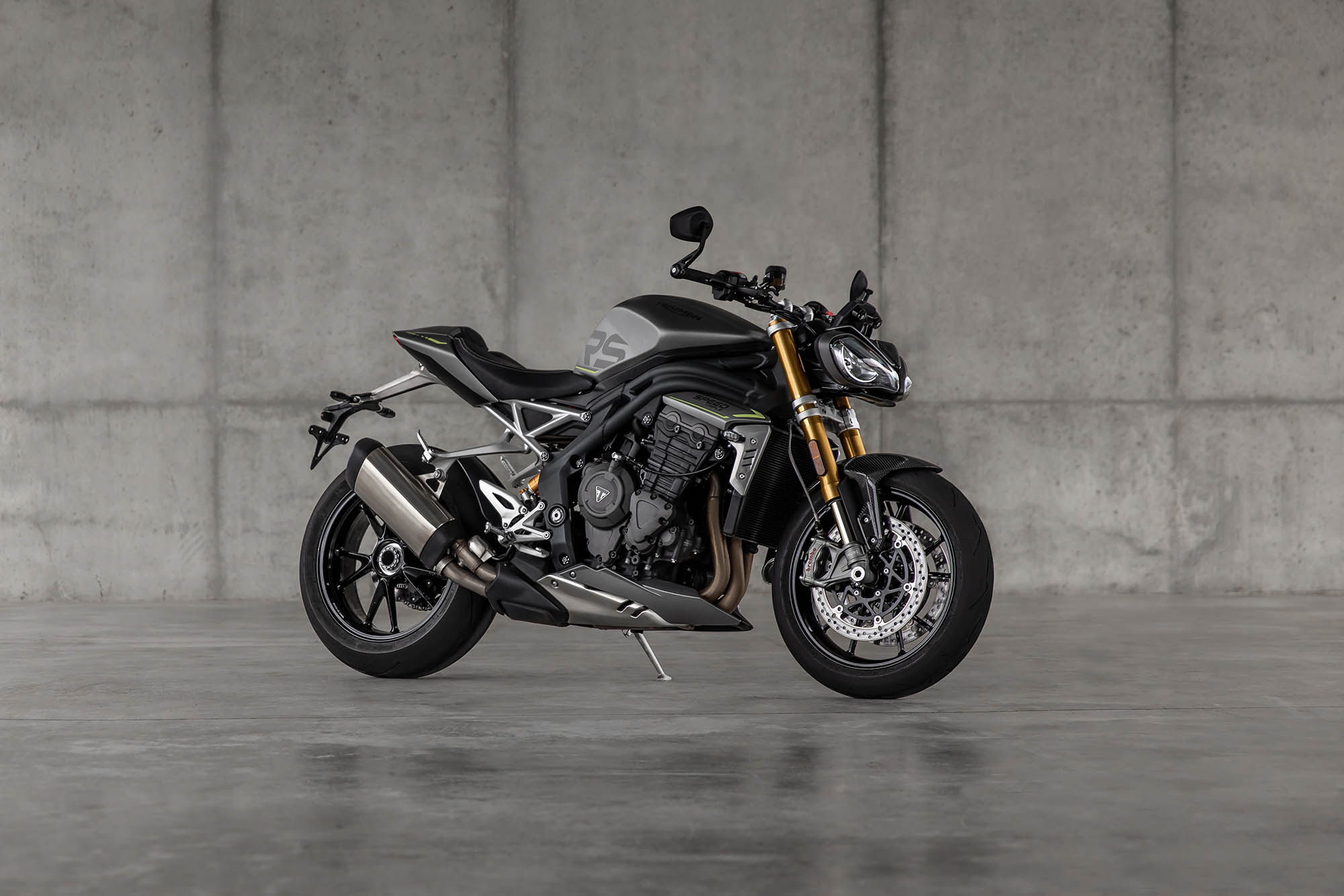 Triumph has announced an all-new version of its famous Speed Triple, with a brand spanking 1160cc three-cylinder (of course) engine making a stonking 178bhp and housed in an equally ground up new chassis that’s lighter and sharper than before.

The British brand has been left behind somewhat in recent years as the naked class got more and more extreme, but the 2021 Speed Triple RS (we expect to see some more variants with a lower spec in the months and years to come) looks like redressing that.

While it’s true that the term ‘all-new’ is bandied around with abandon by many marketing bods, the 2021 Speed Triple is one motorcycle that can genuinely wear that tag. It’s the most powerful motorcycle ever to wear the famous Triumph name and has a spec sheet that suggests it will be a real weapon.

With a wet weight of 198kg, the 2021 Speed Triple is 10kg lighter than the model it replaces. Both the frame and engine are considerably lighter than the previous generation bike, and the engine is claimed to have 12% less inertia, which helps pick up and handling.

Triumph says that they’ve gone for ‘track levels’ of performance. Suspension on the RS is from Ohlins and, naturally, fully adjustable, with 43mm NIX30 forks and a TTX35 monoshock at the rear. Brakes are Brembo’s top-end Stylema calipers and Metzeler Racetec RR rubber wraps itself around the cast aluminium wheels. Styling is dominated by Triumph’s signature twin-spar aluminum frame and single sided swingarm and, although the looks are more generic than past Speed Triples, overall it looks and feels like a Triumph.

Sophisticated electronics are the key to managing modern sports bikes and Triumph’s got some great form with its Street Triple models. Five riding modes, adjustable traction control, wheelie control… the Speed Triple RS has all that you would expect from a 180bhp motorcycle. Triumph is also at pains to point out that the Speed Triple has been designed as a road bike, rather than a retro engineered superbike, and say that comfort has always been improved too.

The ‘Speedie’ is arguably the most iconic model from Triumph’s Hinckley era, but has been getting somewhat long in the tooth in recent years.

Originally launched in 1994, it was something of a parts bin special named after the famous Speed Twin of the 1930s. Taking Triumph’s modular design of the time, where all models used the same frame and engine design, it added low handlebars and blacked out components to create a café racer vibe. It was a reasonably popular model, and its credibility was backed up by a high-profile race series that attracted big name riders including Ron Haslam and David Jefferies.

The Speed Triple came of age in 1997 with an all-new model. The T509 version was more-or-less an unfaired version of the T595 Daytona superbike. Initially it ran an 885cc, 108bhp, three-cylinder engine but was soon upgraded to the same 130bhp 955cc motor as the Daytona. Where the original Speed Triple was café racer in its styling, the T509 transformed the model into a factory streetfighter, with high bars and polarising twin ‘bug eye’ headlamps paying homage to the stripped down specials that had started to appear on the scene.

Perhaps the Speed Triple really came of age in 2005, when the fourth generation model was introduced with a heavily revised, 1050cc, engine. With Triumph abandoning the superbike class, the Speed Triple was the British company’s highest performing model and, in some eyes, was the most pure interpretation of the model thanks to its stubby back end, high level twin silencers, single sided swingarm and those bug eye headlights.

In 2011 a new model was introduced. The chassis was new and improved but the styling was controversial, with gauky new headlights and an awkwardly shaped fuel tank. A further update came in 2016, and despite over 100 internal changes to the engine, the 1050 mill was starting to feel its age against the 160+ bhp supernakeds from the likes of BMW and KTM.

The new 2021 Speed Triple once again gives the British owned company a seat at the top table in the extremely competitive performance naked class. With a claimed 178bhp, it can now go head to head with the Aprilia Tuono V4, BMW S1000R, KTM 1290 SuperDuke R, Yamaha MT-10 et al, and while the Speed Triple has been lacking in the performance stakes in recent years, Triumph has built a strong reputation in the middle weight class with its Street Triple range. We fully expect this latest model to be well received by Street Triple owners looking to upgrade, as well as by brand loyal Speedie fans waiting for a long-awaited upgrade to their favourite machines, especially as the RS carries a very competitive price tag of just over £15,000 when it arrives in showrooms in late February. 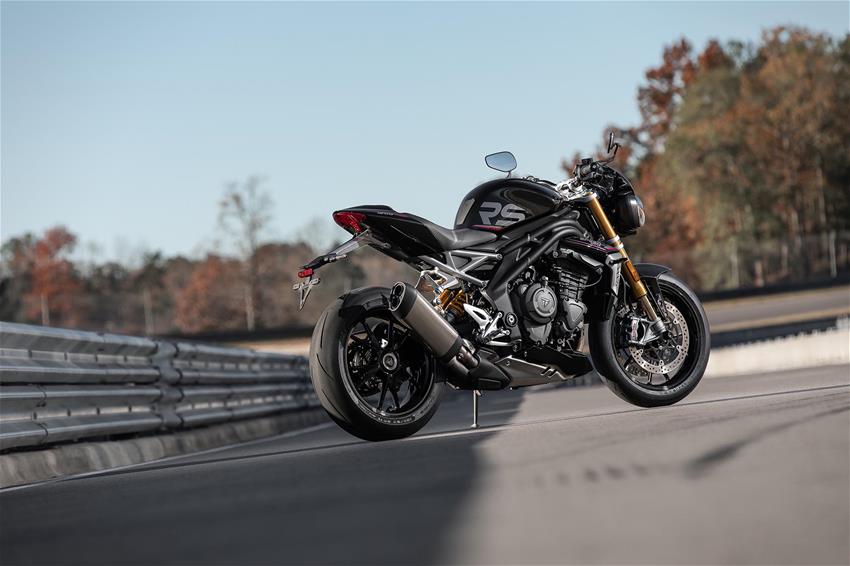 What does the new Speed Triple mean for other Triumph models?

Developing an all-new motorcycle is an expensive business and its normal to see manufacturers recouping their costs by offering a number of different models sharing the same engine and major components.

Ducati is probably the most obvious example of this. Having developed a new V4 engine for their Panigale superbike, they’ve since rolled out the engine to their adventure touring model (Multistrada) and hypernaked (Streetfighter).

It’s hard to imagine that there are not any drawings of new 1200 models in the Hinckley design offices. We’d fully expect to see at least one other Speed Triple variant, most likely a less expensive version without the Ohlins suspension, and it would be no surprise to see a Multistrada competitor emerge either in addition too, or as a replacement for, the current Tiger 1200 range.

Many Triumph fans would love to see a full-on superbike emerge from Hinckley, and there will no doubt be some speculation as to whether or not a Daytona 1200 is in the pipeline. With 200bhp the benchmark for high performance sportsbikes today, the Speed Triple 1200 isn’t quite there yet, but there’s no doubt that Triumph has the skills to make such a bike – what we need to find out is whether or not they have the desire to take on Ducati, Aprilia and the Japanese manufacturers in that most unforgiving of all sectors.