A history of… the Kawasaki Ninja ZX-10R 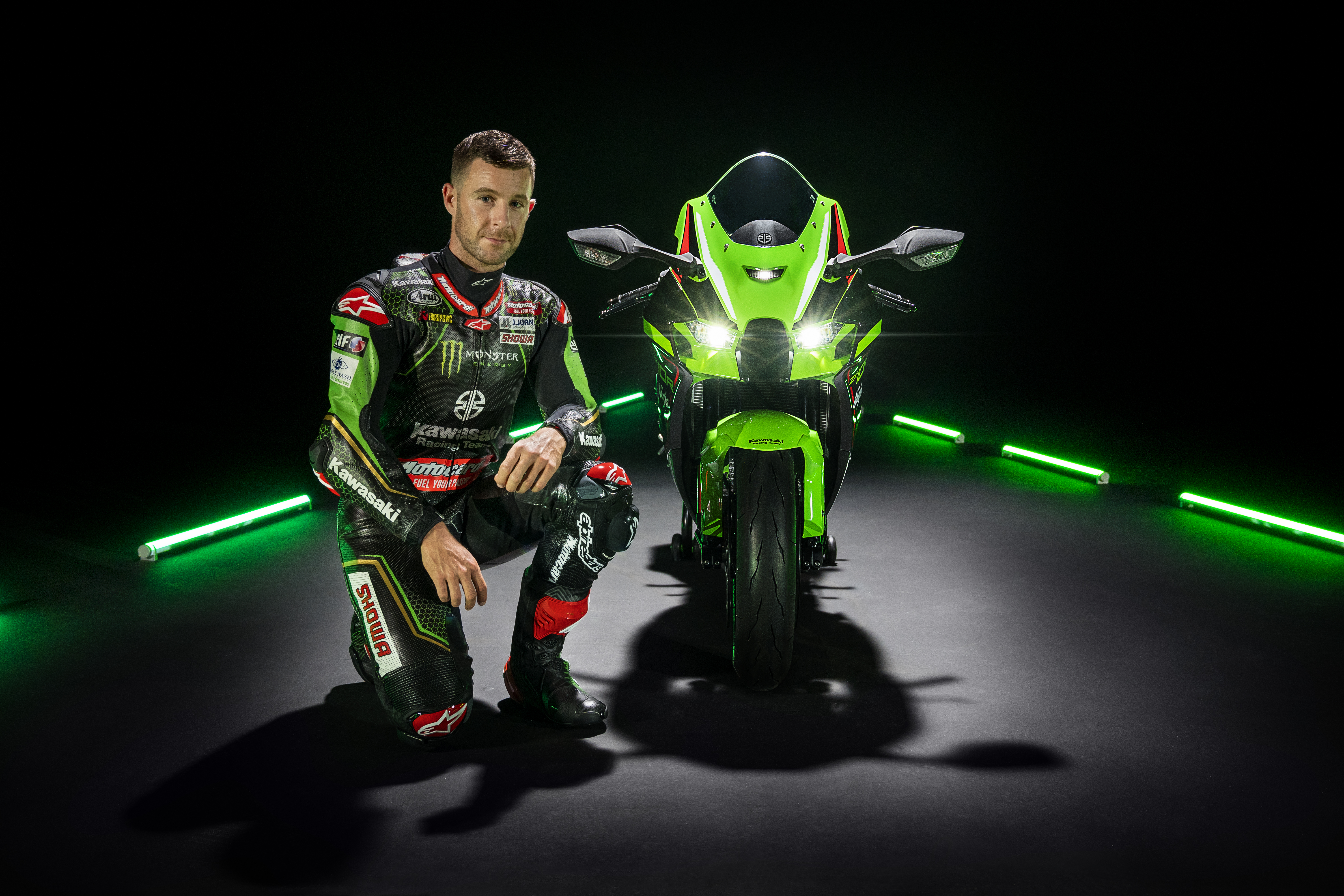 From unhinged lunatic to the most successful superbike on track today, Kawasaki’s 1000cc contender has undergone an almighty evolution since its introduction back in 2004.

Kawasaki was somewhat late to the litre bike revolution of the early 2000s. Yamaha created the blueprint we know for today’s four-cylinder superbikes when it brought out the original YZF-R1 in 1998 and Suzuki upped the ante in 2001 with the first GSX-R1000. Kawasaki’s first effort was the most extreme of the bunch, quite an achievement in what was already a class full of reprobates.

That original ZX-10R was everything Kawasaki was famous for, a real ‘Green Meanie’ in the great tradition of past models as diverse as the classic Z1 and the iconic KR-1S two-stroke. The engine was epic (claiming over 180bhp at speed, when the ram air kicked in) but it was aggressive in its power delivery and less ‘holistic’ than the competition. Of course, it came in the limiest of lime green colour schemes. It was a complete weapon.

These mid-2000s superbikes were the last of the analogue sports bikes. Honda had gone in the opposite direction to Kawasaki, making the ‘Blade a friendlier and more usable package than the Suzuki and Yamaha, and the Ninja generally struggled to make much of an impression in this most hotly contested of classes. Little did we know, however, that we were witnessing the beginning of a legend. 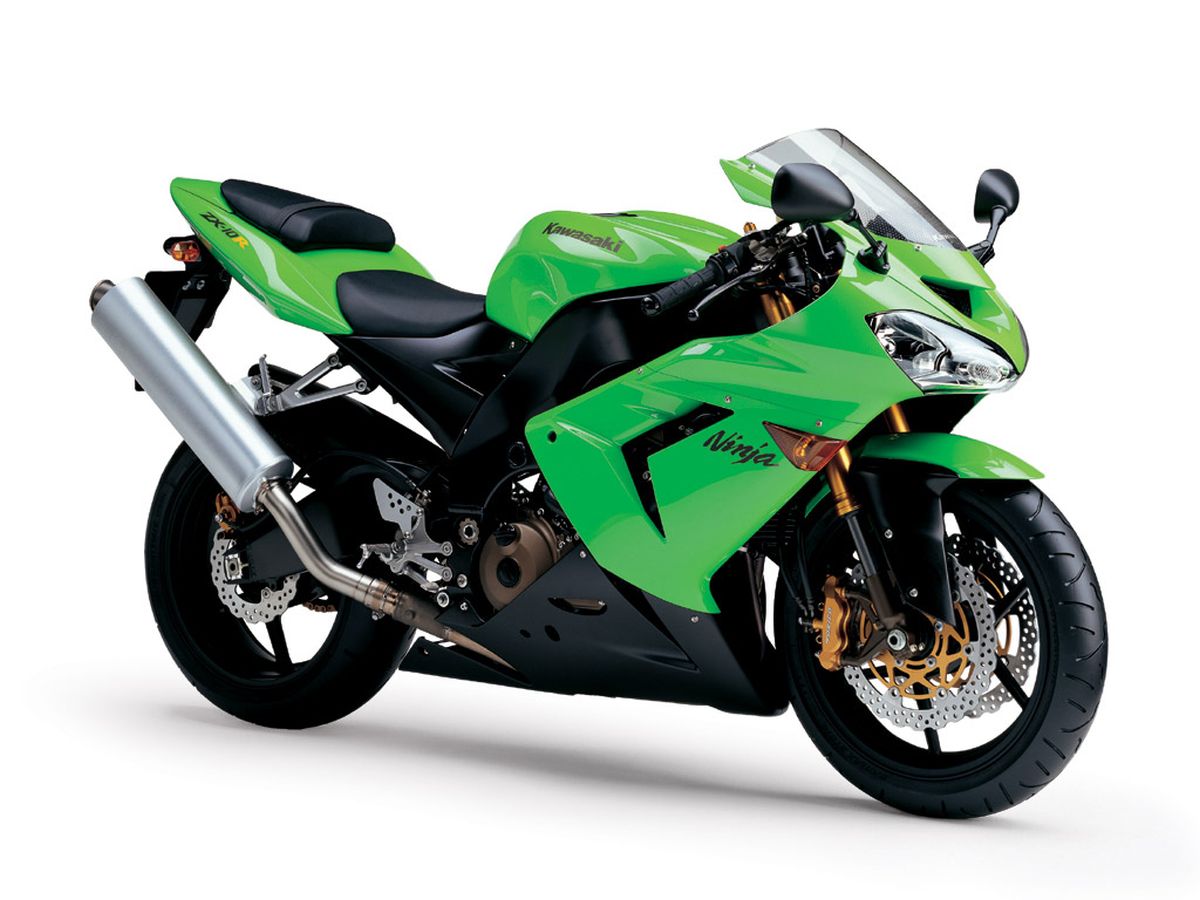 Of course, the ZX-10R wasn’t the first Kawasaki to be dubbed ‘Ninja’ and it was a much anticipated model from the green team, who had a track record in building super fast motorcycles.

Back in 1972, the 900cc Kawasaki Z1 was the world’s fastest production motorcycle and earned the company a reputation for building big bikes with monster motors. Just over a decade later, Kawasaki introduced arguably the most iconic motorbike of the 1980s with the GPZ900R. Subtitled the ‘Ninja’ it was the fastest bike around when it came out for 1984. This 115bhp four was good for 150mph, the first production bike to be able to do so, and it was immortalised when one was ridden by Tom Cruise in the 1986 movie Top Gun.

The GPZ stayed in the Kawasaki range for almost a decade and found itself surpassed in the marketplace as other manufacturers introduced smaller, lighter and better handling machines. The 900 was complemented by the GPZ1000RX, which in turn evolved into the first use of the ZX-10 name with the ZX-10 ‘Tomcat’ (which was possibly a reference to Top Gun, which featured the F-14 Tomcat fighter jet). The original ZX-10 was a shortlived model, which morphed into the aerodynamic ZZ-R1100, an unapologetic sports tourer that easily reclaimed the unofficial ‘world’s fastest bike moniker’ in 1990.

The introduction of the Superbike World Championship in 1988 saw the Japanese manufacturers focus on 750cc four-cylinder machines as their homologated basis for the racers. Kawasaki had considerable racetrack success with the ZXR750, which holds a place in history as the only inline four cylinder 750cc machine to win the world superbike title (Scott Russell, 1993) and its replacement, 1996’s ZX-7R Ninja, remained a popular bike even if it was usually outgunned on track by the 1000cc V-twins also allowed in the class.

Where other manufacturers made their road focussed sports bikes more compact, Kawasaki gained a cult following with the ZX-9R Ninja. The Nine mated a typically lusty Zed motor with a generously proportioned chassis, and although it was no match for a Honda CBR900RR FireBlade or a Yamaha FZR1000R EXUP on the track, it retained a strong fanbase among the Kawasaki loyal for its all round ability on the road.

By 2004, both the ZX-7R and ZX-9R were uncompetitive on the track and in the marketplace. Superbike rules had recently changed to allow 1000cc fours to compete and new models from Suzuki and Yamaha had rewritten road riders’ expectations. The Ninja ZX-10R was eagerly awaited by the Kawasaki faithful, but it was to prove a difficult task to convert those floating voters to Team Green in the early days. 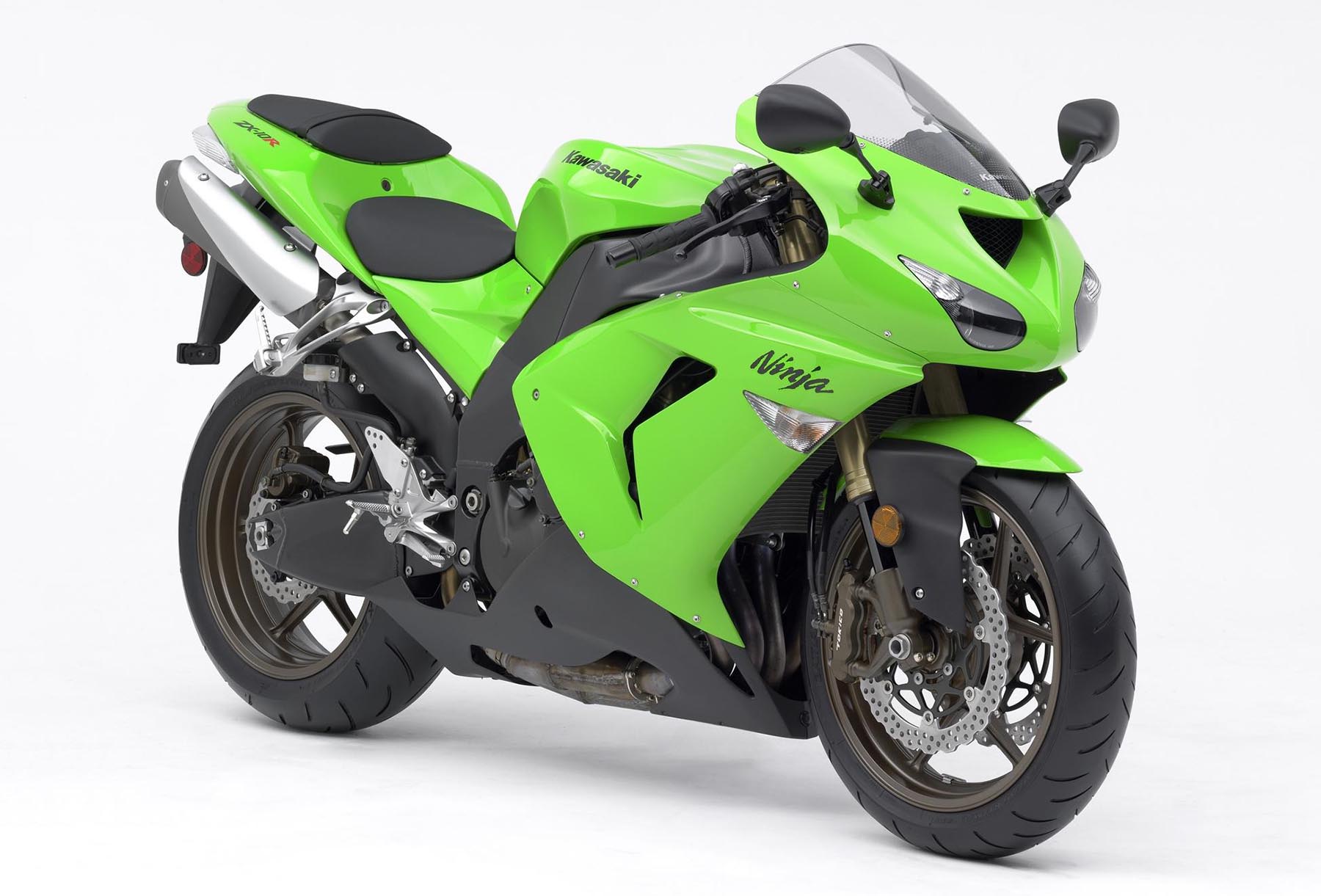 The first generation ZX-10R had been a relative flop on road and in racing. Group tests of the day praised the monster engine but felt that the flighty chassis was too much for road riders, with its short wheelbase and razor sharp steering often causing stability issues at speed. With its ultra compact dimensions, the ZX-10R also broke from Kawasaki tradition of building comfortable ‘real world’ bikes and despite winning the battle of the spec sheets, it seemed that the ZX-10R crossed the line of extremity for the majority of riders.

Kawasaki never officially raced the first ZX-10R either, which didn’t exactly help its image. The company was in the middle of its brief MotoGP sojourn and the road bike borrowed some of the ZX-RR racer’s technology, such as the stacked gearbox, although there were some private efforts in British and world superbikes, with Scott Smart winning a couple of races and finishing fourth overall in the 2004 BSB series on one.

Such was the drive for evolution in the 2000s, litre bikes received biennial upgrades to keep them up to speed with the competition. For 2006 the ZX-10R became softer. The styling was more rounded and the twin under seat silencers, which were all the fashion at the time (they were also found on the Yamaha YZF-R1 and the Honda CBR1000RR Fireblade), were brought in for emissions reasons as much as styling. The chassis was also less flighty, Ohlins supplied a much needed steering damper, geometry was tweaked and the heavier crankshaft gave a more progressive power delivery. It was still flippin’ fast though and still the bad boy of the class.

Kawasaki gave a modicum of support to the Italian PSG-1 race team in world superbikes, and popular Brit Chris Walker had the honour of winning the ZX-10R’s first world superbike race with a God like performance in soaking conditions at Assen in 2006. It was Kawasaki’s first WSB win since 1999 and it would be another five years before a green bike would top the podium again.

The 2006/7 ZX-10R was a relative sales flop and remains possibly the least popular generation among aficionados. Hardcore Kawasaki riders lamented the softening of the original’s turbo nutter approach, while less brand loyal riders still preferred their ‘Blades, Gixxers and R1s. The twin exhausts often led to this generation being cruelly nicknamed ‘the wheelbarrow’. It was hardly surprising that they would be gone for the 2008 replacement…

That third generation bike was a significant evolution of the design, making it more or less an all-new model. In a sign of things to come, it featured traction control – a very crude system compared to the highly sophisticated electronics we have come to expect a mere decade on – radial brakes and more power. Kawasaki claimed 185bhp from the 2008 ZX-10R and said that ram air could add around 10bhp more at speed. It was a little heavier too, thanks mainly to new emissions equipment, and the geometry was again made more relaxed, with a longer wheelbase and increased rake and trail. The 2008 model was again considered a step forward but found itself against stiff competition from the GSX-R1000 K7 and the first crossplane Yamaha R1. Kawasaki updated the Ninja again in 2010, mainly with styling tweaks, but it had something new up its sleeve for 2011. 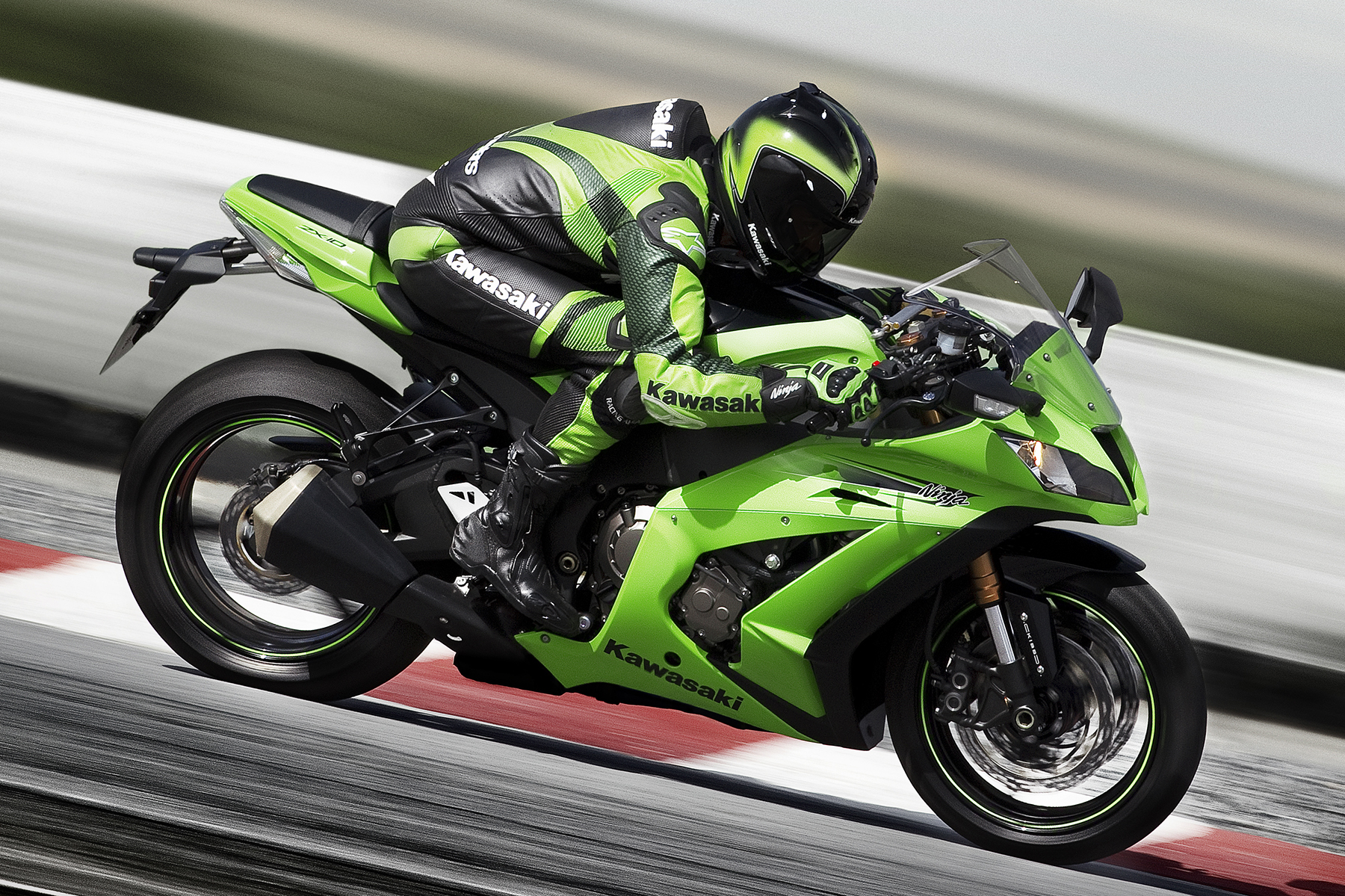 It’s hard to believe that it’s been a decade since the new generation of 200bhp superbikes hit the marketplace.

BMW rewrote the rulebook in 2009 with its sophisticated S1000RR, which not only produced a headline grabbing 190bhp but came with a whole host of electronic riding aids, such as dynamic traction control and switchable power maps.

Hit by the global financial crash, most Japanese brands slowed down their development on sports bikes but Kawasaki bucked the trend with an all-new Ninja ZX-10R. And it had the BMW right in its sights.

The 2011 model was new from the ground up. The engine claimed a class leading 197bhp and electronics that were a match for its German rival. From being the wild child of the superbike class some seven years earlier, the Ninja was now a supremely planted superbike that somehow managed to be not only more powerful than its predecessor, but much, much easier to ride too.

Kawasaki also got serious in racing the ZX-10R, having worked with Britain’s PBM team since 2009. The partnership was never a real front runner, but Tom Sykes won in the wet in Germany in 2011.

For 2012, Kawasaki moved its factory team to the Barcelona-based Provec Racing outfit and started its decade of near dominance. Sykes missed out on the 2012 title to Max Biaggi by just half a point, and he would win nine races and take the title the following season. He almost repeated the success in 2014 too, scoring just six points less than champion Sylvain Guintoli in a thrilling and sometimes controversial campaign. In the UK, Shane Byrne won the 2012 and 2014 BSB titles on a ZX-10R. 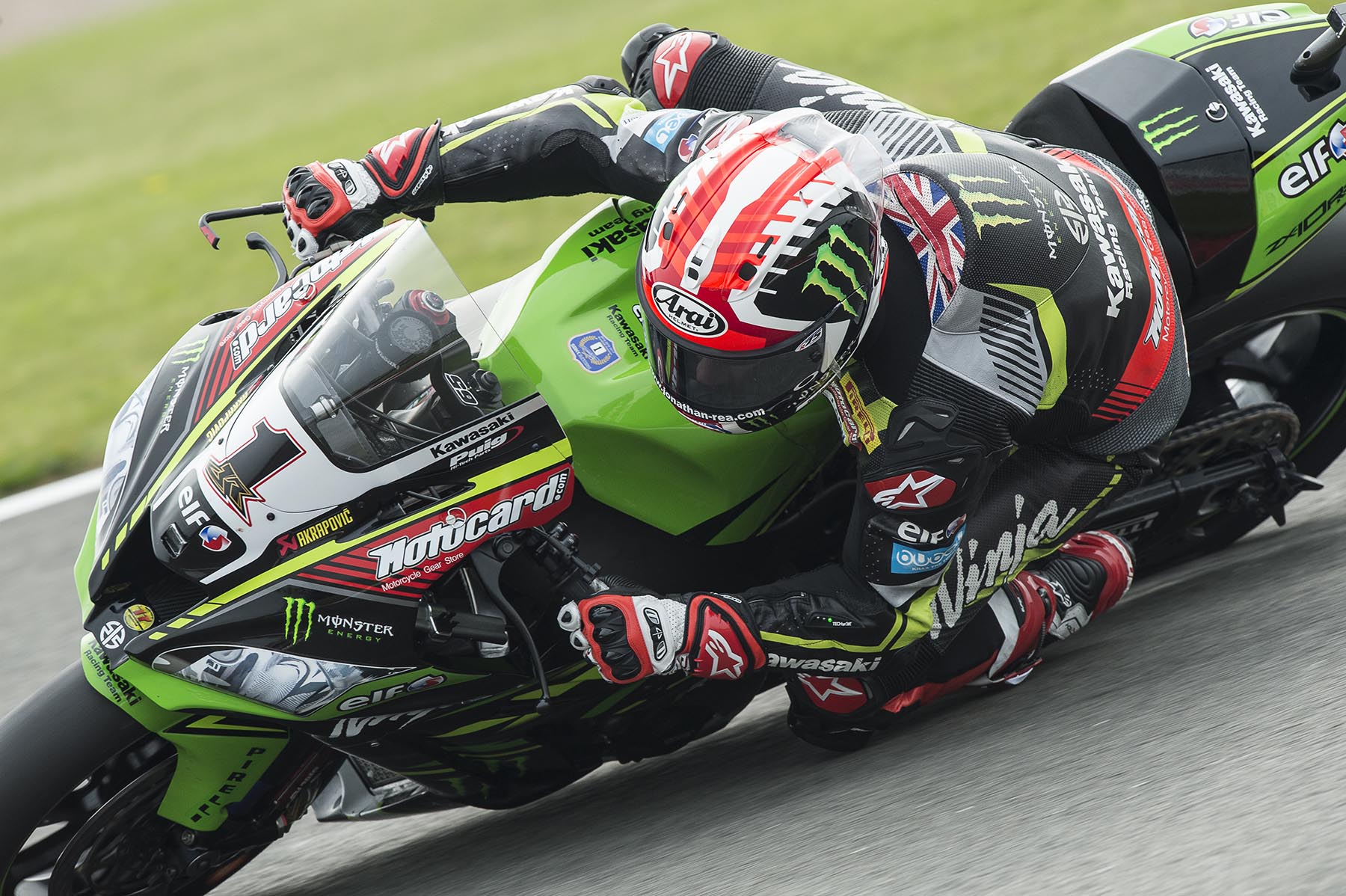 Despite interest in 1000cc sports bikes dwindling, Kawasaki continued to develop its flagship model. Jonathan Rea joined KRT (Kawasaki Racing Team) alongside Sykes in 2015 and promptly destroyed the opposition to win his first world title, but for 2016 there would be an updated Ninja that would particularly benefit road riders.

The big upgrade was hidden deep inside the bike. The IMU (Inertial Measurement Unit) allowed for sophisticated next generation electronics, while the Showa suspension was upgraded and a number of other tweaks were made. Some things didn’t change though, and Rea won the 2016 world title, and the 2017 title, and in 2018 too! Leon Haslam also won the BSB title on a Ninja that year as well.

The quest to keep winning in world superbikes has meant that Kawasaki has been more active in updating its superbike than some other brands. Small changes, designed to improve and ‘homologate’ the bike for racing saw the introduction of a higher spec ZX-10RR in 2017. Just 500 examples of the RR are made, the minimum required to make it legal for production racing, and the 2017 model featured a revised cylinder head and lightweight wheels.

A 2019 update for both the R and RR models saw the adoption of new ‘finger follower’ cam followers and a lighter valve train. That allowed for more RPM and saw the Ninja break through the claimed 200bhp barrier for the first time. Rea continued to dominate world superbikes, winning the title again in 2019 and 2020, making it six in a row, and for 2021 there’s another small update aimed at increasing the bike’s potency on the racetrack.

This time the upgrade is more visual. A new upper fairing is Kawasaki’s answer to the MotoGP developed wings used by Ducati and Honda. The design is claimed to generate 17% more downforce than the outgoing design. Add in some other small technical changes and there’s no question that he Ninja ZX-10R’s story is a long way from over. 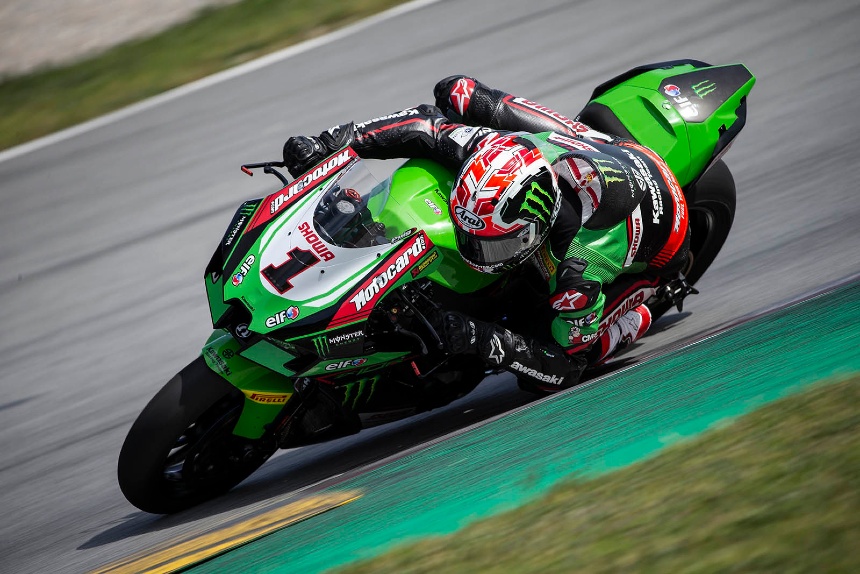